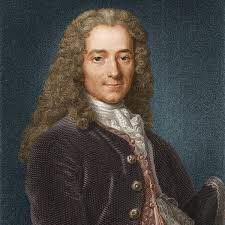 The philosophers of the French *Revolution, Voltaire included, achieved much of their devastating effect by means of *sarcasm and ridicule.  Whereas, *Montesquieu had been more subdued and refined in his satire of French society, Voltaire was unrelenting in his assault on *Christianity.  He called on his countrymen to “crush the infamous thing.”   In *”Candide” he blamed the *suffering of the world on God and the church.   He held humanistic *optimism to be utterly futile in the face of the grinding wretchedness of the human condition. This was seen, for example, in the apparent injustice of the *suffering caused by the *Lisbon earthquake of 1756.  Like Rousseau he believed that men were born good, but were corrupted by *civilization, as if they had contracted a disease.  Voltaire’s skepticism succeeded in making Christianity appear irrelevant, impotent, and *childish in the eyes of sophisticated French society.

Who was Voltaire? (1694-1778) Voltaire was a French skeptic and wit who lampooned religion and fomented discontent prior to the French Revolution through voluminous plays, novels and poetry . His life and work so epitomizes the vicious rationalism of the “Second Enlightenment” that he has been called by some “the father of the Enlightenment.”

Historical context: Like Montesquieu before him, Voltaire admired the British system.  He studied it during a period of exile from France following a dispute with a nobleman and imprisonment in the Bastille. He was enchanted by the British capacity to “prescribe limits to the power of Kings by resisting them, and who, by a series of struggles, have at last established…that wise government where the prince is all powerful to do good, and at the same time is restrained from committing evil…and where the people share in the government without confusion.”

Unfortunately, Voltaire did not live long enough to learn the tragic lesson that the British system could not be reproduced on his Enlightenment base. Rather than the “Bloodless Revolution” of 1688, the French Revolution ended in a bloodbath, the dictatorship of Napoleon, and the Napoleonic Wars.

Summary of Voltaire’s teaching: Voltaire was animated by personal revenge for wrongs committed against him by the nobility in his youth. Although educated by the Jesuits, he saw the church as the ally and prop of a caste society which delighted in persecuting the underclass. In spite of his rancor, he was charmed by the adulation of Parisian society, and had no desire to participate in a “plebian revolt”, but with no positive plan for societal reconstruction that was the tendency of his writing.

Although Voltaire and Rousseau despised each other, they were united in their hatred of orthodox religion in every form, Protestant and Catholic. “Crush the infamous thing” (1), was Voltaire’s callous anathema. His attitude toward the King of kings was summarized in this notorious statement: “Among the Jews, there have always been men from the rabble who played at being prophets in order to distinguish themselves from the mob: here, then, is the one who made the most noise, and who was turned into a god.” “If God did not exist it would be necessary to invent him,” he said, “Man is not born wicked; he becomes so in the same way as he becomes sick.” Thus, his hatred of Christianity belied his famous dictum of tolerance: “I disapprove of what you say, but I will defend to the death your right to say it.”

In spite of his antagonism to organized religion, Voltaire was a committed Deist, or his preferred term Theist, and could express considerable zeal with respect to his deity. In the place of the Christian God, Voltaire substituted natural law with its mechanistic causation as conceptualized by Isaac Newton. He had an unquenchable trust in human reason and like all humanists sought the brotherhood of man apart from the Fatherhood of God. Perhaps unknown to Voltaire the intellectual pillars supporting natural law causation were being destroyed by his opponent, David Hume.

Voltaire’s most brilliant work is the satirical and philosophical novel, Candide, in which he explores the problem of human suffering and evil alleged to have been propagated in the name of religion. The plot of the story is hung on the travels of Candide and the ever optimistic Dr. Pangloss in search of his beloved cousin, Cunagonde. On one hand, the book is an attack on humanistic optimism which had been shattered for Voltaire in the Lisbon earthquake in 1756. “Optimism,” said Candide, “is a mania for maintaining that all is well when things are going badly” (Ib. 19). On the other hand, it is an attack on the perceived hypocrisy of organized religion in compounding the suffering of humanity. Confronted with disaster after disaster, Pangloss long maintains a spirit of Pollyanna optimism, but even he is reduced at last to silent resignation.

Implications for subsequent history. Voltaire’s sarcasm and skepticism, typically issued from his retreats on the borders of France (e.g., Ferney, Switzerland), created and nurtured the intellectual climate that led to the French Revolution. Besides his sixty stage plays, he made significant contributions to Diderot’s philosophical Encyclopedia, which further fueled revolutionary fervor. In recognition of this his remains were enshrined in the Pantheon by the revolutionists in 1791. The skeptical spirit of Voltaire, which has made unbelief seem fashionable and Christianity childish and untenable survives to the present day.

To be fair, Voltaire’s sarcasm was sometimes well-deserved.  Upon occasion of the execution of British Admiral Bying who failed to accomplish an important mission in 1756, Candide’s traveling companion responds, “In this country it is thought well to kill an admiral from time to time to encourage the others” (2)

Biblical analysis: Contrary to Voltaire, human suffering is not a problem for the Christian, it is a problem for the unbeliever. In the final analysis, human suffering is not the fault of an unjust, uncaring God, it is rather the just outcome of man’s rebellion from his Creator. Whatever suffering we may experience in life we must never forget that it is far less than we deserve. Moreover, the book of Job gives us a behind-the-scenes view of the purpose of suffering in the cosmic battle of good vs. evil. The Devil, we learn is in the business of accusing Christians of hypocrisy before the throne of God: “They worship you only because you reward them”. To prove the integrity of His saints, God must subject them to normally temporary periods of affliction. When they stand the test, he blesses them more than ever.

For the unbeliever who has no God or a god of his own imagination, the problem of evil and human suffering is truly a mysterious terror. In a universe governed by chance or unknown, capricious gods, there can be no ultimate explanation.

Corrective or Prescriptive Actions: “Blessed is the man that walketh not in the counsel of the ungodly, nor standeth in the way of sinners, nor sitteth in the seat of the scornful,” we are informed by the first verse of the Psalms. Voltaire was the archtypical scorner and we must avoid at all costs the spiritual contagion of his skeptical temper.