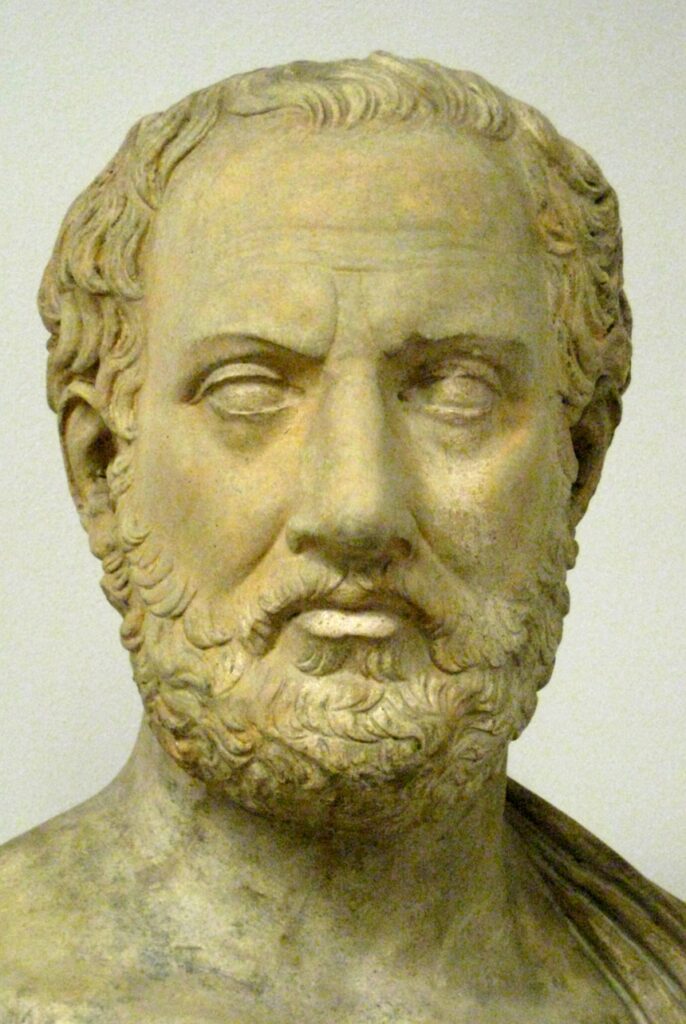 Thucydides recorded events of the *Peloponnesian War (431-404 B.C.) between Athens and *Sparta, as they happened.  The History of the Peloponnesian War seeks to draw *political and ethical conclusions from the facts.  *Speeches are a primary vehicle for interpreting events, but they have been obviously *fabricated in many cases.  Thucydides praised the *democratic ideal of universal participation in government, but ended up recording its degeneration into *anarchy.  The weaknesses of Democracy were also criticized by the Greek *philosophers like Socrates, who were Thucydides’ contemporaries.  In seeking to eliminate the *supernatural from his narrative Thucydides became the first of the *secular historians.

Who was Thucydides? (460-400 BC) Thucydides was the Greek historian of the Peloponnesian War waged between Athens and Sparta from 431 to 404 BC. His career was distinguished by the fact that he recorded events as they happened, and did not have to reconstruct the distant past.

Historical context. By virtue of the prestige garnered from her role in the Persian war and the liberty extended to Greek citizens, Athens entered her short, but glorious “Golden Age” in the 450s under Pericles. Unfortunately, productivity spawned arrogance and led to a confrontation with Sparta over trading rights with Corinth, a member of the Spartan League. The Peloponnesian War erupted in 431 BC. Thucydides was chosen to be one of the Athenian generals in the annual election and was dispatched by sea to relieve Amphipolis, which was under heavy siege. Thucydides failed to arrive in time to prevent disaster and was punished with a 20-year exile from Athens.

The exile provided the freedom he needed to record the history of the war as it unfolded before his eyes. Pericles strategy called for all Athenians to take refuge within the city’s walls while the fleet raided the Spartan coast. Sparta was thus left free to ravage Athenian agriculture and eventually established an infantry outpost in Athenian territory from which to harass the city. After rejecting several Spartan peace offers, Athens suffered a disastrous naval defeat at Syracuse in an ill-advised invasion of Sicily (413 BC). An even more crippling blow was delivered by a plague which broke out in Athens (430 BC), claiming the lives of thousands, including Pericles himself. With the defeat of the Athenian fleet in 404 B.C. a puppet regime known as the Thirty Tyrants was installed at Athens, but overthrown a year later. Athens recovered some of her strength and continued to bicker with Sparta, Corinth and Thebes until the rise of Alexander the Great.

“Thucydides was “two generations younger than Aeschylus (b. 525), who saw the overthrow of the tyrants, the creation of the democracy, and the brilliant repulse of Persia. He was a generation younger than Pericles (b. circ. 493), Sophocles, Phidias, Anaxagoras and Herodotus, men who in their different ways created and reflect the noonday of Athens. Midway in age between Euripides (b. 480) and Socrates (b. 469), on the one hand, and Aristophanes (b. circ. 445), on the other, he shared these men’s analytical spirit, their social temper and emphasis, and their struggle towards rational generalization” (1).

Summary of Thucydides’ teaching. Beyond just a simple narrative, Thucydides desired above all else to draw political and ethical lessons from events he described in the History of the Peloponnesian War. One of the tools on which he relies heavily for this purpose is the speeches of prominent individuals. Typically he selects one of many suitable leaders to illustrate his point, ignoring the others. He curtails the History inexplicably in 411 BC, seven years before its conclusion.

Thucydides utilized a comparative structure – Athens to Sparta and Pericles to his weaker successors – to prove the superiority of the Democratic ideal. “Every man among us,” Pericles declared in his celebrated Funeral Oration (I 35-46), “is, if not an initiator, at least a judge of policy….” (2). However, he ended up a chronicle of the inevitable tendency of Democracy toward self-destruction: “…democracies prefer to look for material solutions to their spiritual problems. They never despair of making up the difference between the citizen’s desires and personal fulfillment with greater production or with a more equitable distribution of goods. Indeed this is the reason for democracy’s basic optimism” (3). This explains the criticism of Democracy found in the fourth century Greek philosophers, Plato and Aristotle, who pictured it as a tyranny of the proletariat. A blundering “tyranny of the majority” did in fact gain the upper hand in Athens after the death of Pericles.

Implications for subsequent history. Thucydides provides an accurate chronicle of events based on a careful weighing of eye-witness accounts, but the speeches he selects to represent key points are not word-for-word. Far from being accurate, the speeches all reflect Thucydides’ style and thus represent his interpretation of events at critical turning points in the war. His emphasis on war and government, for the most part ignoring other social influences such as religion or economics, helped to establish the impression that politics is the dominant force in history. His analysis reflects and perpetuates the Greek cyclical view of history: “The lack of the fabulous may make my work dull,” he said, “But I shall be satisfied if it be thought useful by those who wish to know the exact character of events now past which, human nature being what it is, will recur in similar or analogous forms” (I 22).

As opposed to the Christian linear perspective on history, such a view tends to stunt human progress in the long run, as was the case with Attic (Athenian) democracy and science.  Plato was influenced by Hinduism, for example in his 3-part caste system with Philosopher-Kings at the Apex.  The Hindi observed the cycles of nature and reasoned from there to reincarnation, as opposed to resurrection.  Solomon flirted with this circular worldview in the Book of Ecclesiastics.  As a disciple of Aristotle, this could explain Alexander the Great’s obsessive quest for the wellspring of Hindu civilization, at least in part.

Biblical analysis. Thucydides interpretation of events was strictly from a human viewpoint and he might thereby be reckoned as one of the first secular historians. “…he set out consciously to overcome certain weaknesses in Herodotus: hence the insistence on careful checking of eyewitness testimony, on precise chronology, on the total elimination of “romance” from his work, on a rational analysis which has no patience with oracles and supernatural interventions and divine punishments” (4). This perspective denies the sovereignty of God in controlling ultimately whatsoever comes to pass. “And we know that all things work together for good to them that love God, to them who are the called according to His purpose” (Rom. 8:28).

Corrective or Prescriptive Actions. While promising much in terms of human potential, the history of Athens illustrates the ultimate bankruptcy of humanistic democracy and its inability to sustain a culture of enduring liberty. “Had the History gone on to the final defeat of 405, it would certainly have shown only a continued alternation by which democracy endowed Athens with strength beyond any of her rivals, yet robbed her of that strength by political division” (5). Avoid the democratic extreme.