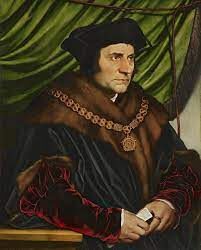 On one level, Thomas More’s Utopia is an *allegorical representation of the idealized *socialist community.  In Utopia private *property has been abolished and citizens selflessly labor for the common good apart from the motivation of personal gain.  All religions are *tolerated and thus equally *irrelevant.  However, numerous clues in the text suggest that Utopia is a *satire on the follies of socialism.  The word itself means “nowhere” and the name of the narrator, (Raphael) Hythloday means “dispenser of *nonsense.”   If this was, in fact, the intent of the author, it is ironic that the book has served as one of the most effective models for socialist propaganda the world has ever known.  In real life Thomas More died a *humanist martyr for his right to freedom of *conscience, a right that he had earlier denied as Lord High Chancellor by sending many *Protestants to the stake for their faith.

Who was Thomas More? (1478-1535) Thomas More was a British author and statesman.  He served at various times as ambassador, high steward of both Oxford and Cambridge, Speaker of Parliament, Secretary of the (Exchequer (Treasury), member of the Kings Privy Council (Cabinet) and Lord High Chancellor. For some three years he used the latter position to condemn numerous Protestants to the stake, including William Tyndale. He was canonized by the Catholic Church in 1935, 300 years after his death.

Historical context. Thomas More’s life was intertwined with the perverse career of the English monarch, Henry VIII. Proud, ambitious and inconstant, Henry was simultaneously the consummate Renaissance monarch and spurious Protestant reformer. The famous painting by Hans Holbein portrays him hands on hip with an expression of confidence, power, and disdain for all lesser mortals. True to this image, Henry committed numerous adulteries, divorces, wars of aggression, and murder of councilors and wives who did not suit his purposes. He was something of a latter-day Nero.

Henry’s promotion of the Protestant Reformation was the indirect result of his conflict with the Catholic church, rather than personal conviction. Ironically, he himself was Roman Catholic in his sympathies. His obsession with leaving a male heir led him to seek a divorce from his first wife Catherine of Aragon after she bore him a daughter, Princess Mary (later “Bloody Mary”). Catherine was related to the powerful Holy Roman Emperor, Charles V, whom the Pope was unwilling to antagonize. In retaliation, Henry cut off bishopric payment to Rome, confiscated church property and made himself head of the church, with the power to appoint bishops. Henry permitted minor changes in practice, such as permitting priests to marry and destroying shrines of the saints. However, the Six Articles of 1539 ensured that the Church of England would remain essentially Catholic in nature.

Initially one of Henry’s favorites, More could find no justification for Henry’s divorce and refused to take the Oath of Supremacy when Henry proclaimed himself supreme head of the church. More became one of some 300 people executed for treason, when he was beheaded in 1535. He died nobly and in good humor, thus making himself a martyr for humanistic independence of conscious.

Summary of More’s teaching. Thomas More is perhaps best known for his political fantasy, Utopia. Utopia is a tedious, but persuasive, piece of political propaganda for a collectivist state. In Utopia all men work and willingly submit their earnings to the state for equitable distribution to the needs of all. Private property is thus abolished. All religious beliefs are tolerated with the result that all are irrelevant and subsidiary to the supremacy of the state. All of man’s baser instincts are allegedly subdued by the socialist formula in Utopia.

Or is it all simply a clever satire on socialist dogma? Some have observed that the narrator’s last name (Raphael) Hythloday means “dispenser of nonsense.” Moreover, the last name of the recipient of the tale, Thomas More himself, in Greek means “folly.” “Clearly these names alert its readers to the playful spirit at work and preclude any mistaking of Utopia for a straightforward account of the cure for society’s ills” (1). The word “Utopia” itself means “no place.”  More often than not, however, these satirical elements have not been recognized.

Rather than submitting to God’s Revelation, in Utopia “they define virtue to be a life ordered according to nature.” This is, however, nature as defined and regulated by the state (natural law), not the nature of the Romantic movement to come later. “Though these principles belong to religion,”  Hythloday explains, “yet they hold that reason leads men to believe and to admit them.” (2)

More died in defiance of this principle, upholding the separation of church and state and denying the right of Parliament or King to make law governing the church. This was perhaps More’s greatest inconsistency and hypocrisy. He denied to all others freedom of religious conscious, persecuting Protestants , but reserved for himself the right to die for autonomy of conscience. He cast himself in the role of humanist intellectual after the pattern of Plato’s “philosopher-kings” and like Socrates chose to die a martyr to the cause of human autonomy.

Implications for subsequent history. Apparently, because its satirical approach is so subtle, More’s Utopia served as the prototype for endless socialist experimentation in the subsequent 300 years. As such it was the source of untold human misery and persecution. If any philosophy has proven to be a “wolf in sheep’s clothing” it is utopian socialism.  Karl Marx adopted the scheme for his Communist economic model in the late 19th Century. All of its idealism notwithstanding, the Socialist system encourages the worst in human nature at all levels of society. Among the laboring classes it cultivates envy, indigence and rebellion and among the ruling classes it opens the door for demagoguery and concentration and abuse of power at the top. The earliest American colonists, in both Virginia and New England were initially required to operate under the socialist model, but both rejected it as socially and economically lethal after about a year – too many deaths by starvation .

Biblical analysis. Unfortunately, Utopian political schemes have failed wherever they have been attempted. These range from isolated religious communities such as the Amana Colonies in Iowa to the secular Communist tyranny that dominated a majority of the world’s population during most of the 20th century. Their abuses range from gross inefficiency on the mild end of the scale to brutal tyranny on the extreme end.

Their failure stems from their rather obvious violation of simple biblical economic commands, such as “If any will not work neither shall he eat.” The biblical model for social welfare is individualistic rather than communistic and is well summarized by the Apostle Paul in Ephesians 4:28, “Let him who stole steal no more: but rather let him labour, working with his hands the thing which is good, that he may have to give to him that needeth.” Historically, all attempts to collectivize charity have resulted in class envy and the rise of a self-serving bureaucracy that consumes the majority of “contributions” to perpetuate itself.

Corrective or Prescriptive Actions.  As we have seen over and over, incredible harm is unleased when men reject God’s revelation in favor of autonomous natural law as their standard for life.  This is seen in such conservative mantras as the call to “vote your conscious.”  It must be replaced by a call to vote biblically.  When all submit to the law of God — King, Councilor, and commoner — true social harmony will accrue, as each finds contentment with his calling in the Kingdom of God.