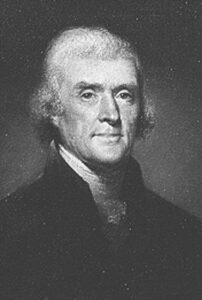 Thomas Jefferson was third President of the United States and main author of the Declaration of Independence. The Declaration declared all men equal, but this was done on the basis of self-evident human reason, not on the Bible. It is a textbook example of the social contract replacing the earlier covenants with God. In this and other writing Jefferson did more than anybody to marginalize Christianity in America.

Who was Thomas Jefferson? Thomas Jefferson (1743-1826) was the third President of the United States.  He is  best known as the author of the Declaration of Independence. The Declaration asserted America’s independence from Great Britain, citing a long list of complaints. It is interesting to note how major events of history sometimes hinge on seeming minor details.  For instance, Jefferson liked to recount how the Declaration had been approved in a short period of time.  The committee in charge was quartered just a few feet from a stable infested with some pesky horse flies. The flies were aggressive in taking up residence in the delegates long stockings.  Thus, a desire for relief from some pestilent insects helped ensure hasty acceptance of this key document.  But, this was a minor irritant compared to hardships soon to be felt by the Americans.  As Jefferson would observe later, “We are not to expect to be translated from despotism to liberty in a featherbed” (40).

Historical context. Tensions between England and the  colonies were at a boiling point by 1776.  That summer Jefferson, a member of the Continental Congress, drafted the Declaration of Independence. His purpose was to defend America’s action to “a candid world.”   He also wanted to recruit France to the colonial cause.  Jefferson spelled out a long list of problems, the basic point being “taxation without representation.”  Although Jefferson wrote the first draft, the work was not his alone.  He was, in fact, somewhat upset by editing changes of the committee. The signers of the Declaration pledged “our lives, our fortunes and our sacred honor” to the cause.

Summary of Jefferson’s teaching. The Declaration sums up Jefferson’s worldview and reveals his debt to John Locke.  The document is biblical only in the sense of being an appeal of the “lower magistrate.”  But, it exposes its Lockean roots by placing the “just power” for government in “the consent of the governed” rather than God. Moreover, as James Skillen has noted, “Jefferson’s appeal for a ground of firm truth and authority is neither to God nor to God’s eternal law nor to the Bible. It is simply to what is “self-evident” within the mind and common conscience of humanity; it is an appeal to the universal/moral essence of human nature that corresponds to the true order of nature, which is God’s will.” (41). Contrary to some, the Declaration of Independence did not set up a new government.  It merely cut an existing political bond.  Thus, the Declaration should not be viewed as a founding charter.  The Articles of Confederation were needed to give a base of power and structure for the new government.

Implications for subsequent history. The efforts of some Christians to confer “sainthood” on  Jefferson are both amusing and distressing.

It is true that Jefferson’s famous “wall of separation” phrase does not appear in the Declaration or the Constitution . Even so, his thinking served to  marginalize Christianity in the public square.  He said it was “religious slavery” to make an office holder swear an oath to uphold the law of God.  Jefferson was very successful in converting the churches to this rationalistic/dualistic view of civil religion.  John Witherspoon was the chief example.  In Jefferson and Witherspoon we have the paradox of two men at polar extremes on the theological scale.  In spite of this, they found common cause in a civil religion based on the social contract and natural law.  This is proof of the extent to which the American churches had come to terms with the Enlightenment.  It doesn’t take a rocket scientist to figure out which side gave up the most philosophical ground. This outlook reigned in America for the next two centuries and beyond.

Biblical analysis. It is worth noting that all three of the key writers of the Declaration  were unitarian in theology (42).  All three — Jefferson, Franklin, and Adams — denied the basic truth of Christianity.   That is that Jesus Christ is God and therefore King of kings and Lord of lords today.  If a man denies the Trinity he denies the deity of Christ and at the same time the Lordship of Christ.  Such an outlook is called Socianism or Unitarianism.  How is it that three heretics can sit down and come up with a civil covenant that is pleasing to God? “A good tree brings forth good fruit, and an evil tree brings forth evil fruit…” (Matt. 7:17). In this vein, some have criticized the Declaration and the Constitution because they did not deal in a biblical fashion with slavery. Others question Jefferson’s replacing the phrase “life, liberty, and the pursuit of happiness” for Locke’s “life, liberty, and property.”  The words “pursuit of happiness” have been misconstrued by modern liberals to justify their demand for all manner of perverted rights.  Among these are the right to privacy, the right to abortion, the right to sodomy, etc.  The doctrine of the Trinity is critical for biblical government.  It offers the only solution for the philosophical problem of “the one & the many.”   That is,  how to blend the freedom of the individual with the need for the state.  In this regard Thomas Jefferson failed miserably.  Jefferson is correct in his view that rights are not granted by government.  However, he is off-base in stating that government exists first of all to secure the rights of man.  Instead, the Bible assigns it the task of placing a check on evil and upholding God’s law.  Man’s freedom and rights are derivative of that.

Corrective or Prescriptive Actions: Christians must leave off idolizing the Declaration of Independence.   We must confess instead that it is a declaration of independence from the God of the Bible.  All efforts to Balkanize the Christian faith – confining its influence to a religious ghetto – must be resisted.