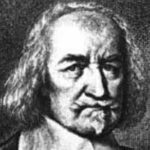 Thomas Hobbes had tutored Prince Charles II, but Charles as king frowned on Hobbes’ Leviathan. Charles was miffed because Hobbes didn’t defend his authority on the basis of Divine Right of kings. Instead he gave the king unlimited power to protect the unruly leviathan — the people en mass – from self-destruction. Hobbes allowed no intermed- iate power, such as the church, to intercede between king and subject.

Who was Thomas Hobbes? Thomas Hobbes (1588-1679) was a tutor of English royalty for most of his adult life. He wrote Leviathan (1651) in defense of royal supremacy in affairs of state. Hobbes had worked long and hard on Leviathan. After Cromwell’s stormy rule he believed that his work would at last be confirmed when Charles II was restored to the throne.  Hobbes had taught Charles as a youth and was convinced that the king would embrace his message.  He argued that the king must rule with a strong arm.  This is needful to tame the unruly populace as it exists in a state of nature. And so he presented a handwritten copy to Charles shortly after his restoration.  Imagine his dismay that day in court when the king frowned on his labor.  In those days the church was closely tied to the crown.  And so some of Hobbes’ dismissive statements about the church were not well received.  For instance,  “The Papacy is not other than the Ghost of the deceased Roman Empire, sitting crowned upon the grave thereof.” (28)

Historical context. From Hobbes’ point of view the Reformation in England had produced turmoil and anarchy in the Puritan Revolution.  Hobbes wrote from exile.  Ironically, the relative freedom of Cromwell’s Protectorate permitted publication of a key apology for the Royalists.  Even more ironic, was the Royalist rejection of Hobbes at the restoration of Charles II. Charles was offended because his former tutor had not defended his kingly power in terms of divine right.  Instead he argued in terms of the alleged protection it gave the citizen.  Likewise, the court favored Anglicans and Catholics were upset with Hobbes’ attacks on  the church.

Summary of Hobbes’ teaching.  Hobbes argued from a secular point of view.  He  called for absolute government control to protect the masses — the unruly  Leviathan — from themselves.   “The condition of man,” he wrote, “is a condition of war of everyone against everyone.”  No intermediary power — especially the church – may interpose between ruler and ruled.  The positive law dictates of the king are supreme and beyond question.  Under positive law the ruler has a free hand to mold the  law in the supposed interest of the people.  Standing opposed to this expansive legal theory, Bible law is more limited and negative.  Its intent is simply to protect the people by forbidding violation of their person and property.

Locke believed that man in a state of nature was innocent and carefree.  By contrast, Hobbes believed that man in the natural state is violent, unruly, and brutish.  The social contract is therefore needed to bridle that selfish and self-destructive power.  An iron hand in a velvet glove is needed to keep it under control.

Implications for subsequent history.  Hobbes did not argue in terms of divine right theory.  Even so, his writings supported an unbridled monarchy. In this sense his writing augmented that of Richard Hooker.  Even though royal power was broken by the Glorious Revolution, Hobbes’ contributed much to later politics.

Hobbes was quick to criticize the Bible and treat the church as nothing but a department of state.  “Modern utilitarianism dates from Thomas Hobbes in the 17th century. Consciously or unconsciously utilitarianism has been absorbed into the mainstream of much modern thinking. Utilitarian ideas tend to be regarded as a more rational alternative to Christianity as the basis for political and social action.” (29). Utilitarianism holds that whatever works best defines correct political action for the majority.

Biblical analysis.  Hobbes was not far off the mark in his estimate of fallen man.  He was wide of the mark in his remedy for restraining man’s sin. The challenge facing all political writers is to strike a crucial balance between the “one and the many.” How may individual rights under God be balanced against the state’s duty to restrain man’s baser instincts?  Only the Bible doctrine of the Trinity can answer this enigma.  Hobbes erred on the side of the “one,” granting nearly total power to the king.  This left personal appeals for justice in serious jeopardy, all in the name of protecting the people.

The same tendency appeared in late 20th Century America.  Personal property rights and freedom were cut back in the name of preserving the environment for all. For instance, in at least one state farmers were forbidden to build a home on their land if they did not earn a very  high level of income.

Corrective or prescriptive actions. Hobbes’ work shows how the social contract may be used just as easily for tyranny as for liberty. The social contract must be rejected.  Only the Bible covenant offers any remedy.  Rulers must swear by formal oath to govern by the Word of God.  Thus, the Word of God restrains both prince and people, providing true liberty under Christ.