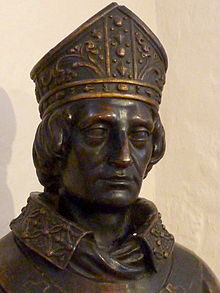 Stephen Langton was the primary author of *Magna Carta and intermediary between King *John and his rebellious nobles.  John was the youngest son of Henry II of England and Eleanor of Aquitaine of *France.  Less successful as a *military commander than his famous brother *Richard the Lionhearted, John imposed oppressive taxes on England to fund his unsuccessful campaigns in France.  This coupled with his *licentious behavior toward ladies of the baronage led to the uprising against him.  Magna Carta guarantees rights of trial by *jury, due *process of law and no taxation without *consent.  However, it was criticized by John Quincy Adams as being a *grant of privilege from the king rather than an acknowledgment of pre-existing rights and freedoms.  Nonetheless, it has been generally regarded as the death-knell of tyranny in Britain.

Who was Stephen Langton? (?-1228) Stephen Langton was an English cardinal and archbishop of Canterbury who functioned as mediator between King John and his barons. He was instrumental in preparing the draft of Magna Carta for presentation at Runnymede.

Historical context. About 100 years after the Norman conquest (1066) Henry II married Eleanor of Aquitaine to unite England and much of France under what came to be known as the Plantagenet Dynasty. Henry II started on the right foot, developing a system of common law for his English subjects. However, as part of an unbiblical move to usurp civil authority over the church, Henry provoked the murder of Thomas Beckett, the Archbishop of Canterbury. This, coupled with unfaithfulness to his wife, resulted in his own family driving him from the throne.

Henry’s son, John Lackland, less militarily astute than his elder brother Richard the Lionhearted, suffered a number of setbacks in defending English lands in northern France. As a consequence, he made numerous imperious demands of his barons for personnel and revenues. Under the feudal system, the great lords were obligated to support their king militarily within reason, but could not be taxed without their approval. Violation of this code, together with John’s licentious lifestyle led to a confrontation at the meadow of Runnymede on the Thames near London in 1215.

The political situation was complicated by John’s ongoing conflict with Pope Innocent III regarding the appointment of Stephen Langton as Archbishop of Canterbury. John initially opposed the Pope and proceeded to confiscate church property in England, while Langton was exiled in France. During a seven-year standoff John was forced to relent after the Pope placed England under interdict and gave his blessing to a French invasion of the island. Langton supported the barons against John, but his conciliatory nature permitted him to mediate between the sides. Ironically, the Pope now sided with John, the liberal implications of Magna Carta conflicting with his training in the Justinian Code. This was a classic confrontation of “civil law” existing in statute and “common law” existing in longstanding legal tradition, usage, and precedent. Consequently, Langton was removed from office.

Innocent III — together with Gregory I and Gregory VII — is considered one of the three most prominent Popes of the middle Ages. He was aggressive against dissenters in Southern France, which included both the heretical Albigenses and orthodox Waldenses.  Innocent established the Franciscan and the Dominican orders to convert or root out both sects. The Dominicans were placed in charge of the Papal Inquisition, precursor to the later Spanish Inquisition

Summary of Langton’s teaching. Magna Carta corrects a wide range of abuses, but its most important features are found in clauses 39 and 40, which alone remain legally binding today. Clause 39 stipulates that “No free man shall be taken or imprisoned or disseized or outlawed or exiled or in any way destroyed, nor will we go or send against him, except by the lawful judgment of his peers or by the law of the land.” This is the basis for the jury system and the doctrine of due process of law.

Clause 40 promises that “To no one will we sell, to no one will we deny or delay right or justice.” Englishmen are here guaranteed “government of law, not of men” and guarantees “ habeas corpus” (bring forth the body), which forbids indefinite imprisonment without trial. In addition, the 12th Chapter requires that no tax may be levied without “the common counsel of our realm”, establishing the principle of “no taxation without representation”, violation of which became the rallying cry of the American Revolution.

Other principles of jurisprudence laid down in Magna Carta include the necessity of local justice (Chap. 17,18), the punishment fits the crime (Chap. 20), and the requirement of witnesses (Chap. 38). Aspects of commercial and cultural liberty are enforced in Chapters 28-31 (compensation for public takings), Chapters 44-48 (abusive environmental law), Chapters 33,41,42 (free trade), Chapter 35 (standard weights and measures) and Chapters 1 and 63 (separation of church and state). Chapter 60 extends these rights and freedoms to all men under authority of the barons.

Implications for subsequent history. Although the Magna Carta is often said to provide the basis of English liberties, the foundation of its authority is inadequate for enduring freedom. Secretary of State John Quincy Adams made that point in a Fourth of July address in 1821: “The people of Britain, through long ages of civil war, had extorted from their tyrants not acknowledgements, but grants, of right…They received their freedom as a donation from their sovereigns; they appealed for their privileges to a sign manual and a seal; they held their title to liberty, like their title to lands, from the bounty of a man; and in their moral and political chronology, the great charter of Runny Mead was the beginning of the world…the fabric of their institutions…instead of solving civil society into its first elements in search of their rights, they looked back only to conquest as the origin of their liberties, and claimed their rights but as donations from their kings….” (1)

Unfortunately, Adams and the American founders while rejecting the weal of the ruler as the basis of governing authority, turned instead to the will of the people. “There were spirits capable of tracing civil government to its foundation in the moral and physical nature of man,” explained Adams, “but conquest and servitude were so mingled up in every particle of the social existence of the nation, that they had become vitally necessary to them….” Thus, Adams distinguishes between King-granted rights and God-given, unalienable rights based in natural law (“nature of man”). It is this equally tenuous foundation on which the U.S. Constitution is based, as specified in its Preamble (we the people). Magna Carta was finally ensconced in the statute books of the realm in 1297 by none other than Edward I, the usurper (2).

The fragility of this formula is seen in the fact that John immediately recanted the agreement, petitioning the Pope for an annulment on the grounds that his signature was coerced. The Pope was quick to accommodate him. Although its influence waned greatly under the strong Tudor monarchy of the 16th century, Magna Carta had a profound influence on later English history, especially its provision that taxation must be by assent. This led in later centuries to the rule that Parliament must approve all taxation, a stipulation that even the Stuart kings of the 17th century were compelled to obey. At that time, Sir Edward Coke and the Petition of Right of 1628 appealed to its provisions. English kings were required to reconfirm Magna Carta some 44 times. Moreover, its provisions were extended in the Bill of Rights embodied in the Revolution Settlement which brought William & Mary to the English throne. They were established in the Act of Settlement of 1701 which clearly defined the British Constitutional monarchy (3)

Biblical analysis. Adams’ analysis presents a false dichotomy and ignores the excluded middle. Rather than the weal (pleasure) of the ruler or the will of the people, government must ground its authority in the Word of God. Deuteronomy 17:18-20 sets the standard: “And it shall be, when he sitteth upon the throne of his kingdom, that he shall write him a copy of this law in a book…And it shall be with him, and he shall read therein all the days of his life: that he may learn to fear the Lord his God, to keep all the words of this law and these statutes, to do them: That his heart be not lifted up above his brethren, and that he turn not aside from the commandment….” (2). Magna Carta makes no clear reference to the law of God and left the door open to the heretical utilitarian formulations of Jeremy Bentham and John Stuart Mill.

Corrective or Prescriptive Actions. It behooves all citizens of the realm, not just the king, to read in the book of the law, that all may contribute to the foundation of biblical liberty when the opportunity arises. Failure to do so leaves the door open for manmade substitutes to insinuate themselves as counterfeits, as when he children of Israel rejected God as their king (I Sam. 8:20).