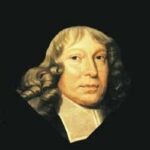 Samuel Rutherford wrote Lex Rex to counter the theory of Divine Right of Kings in which the king answers to no one but God. Rutherford responded that Law is King and the people have the right to overthrow a lawless king. Calvin had taught that the people should suffer patiently until a lower magistrate appeared to lead them to freedom. Thus, Rutherford planted seeds of democracy that eroded Bible authority.

Who was Samuel Rutherford? Samuel Rutherford (1600-1661) was a Scottish Presbyterian minister.  He played a key role in resisting the tyranny of the Tudor kings.  He also helped compose the Westminster Confession of Faith.  The WCF is the most widely used Protestant catechism.  Pastor Rutherford had a winsome personality.  He was often able to win over even his bitter enemies.  Life in 1630s Scotland was a bit dicey, especially for a Presbyterian minister out of favor with Archbishop Laud.  Laud was the theological hatchet man of Charles II.  Rutherford was convicted of “non-conformity” by a High Commission Court for his objections to Arminianism.  He was confined to the king’s palace at Aberdeen.  “The people thought him a strange man, and his cause not good,” was Rutherford’s assessment of the people’s attitude toward him at first. But his cause slowly won the hearts of the people, much to the chagrin of the educated clergy.  “I am here troubled,” he wrote, “with the disputes of the great doctors, (especially with Dr. Barron, on ceremonial and Arminian controversies – for all are corrupt here) but, I thank God, with no detriment to the truth, or discredit to my profession.”

Historical context. Richard Hooker taught Divine Right theory through the final years of the Elizabethan era. Both James I (1603-25) and Charles I (1625-49) used this theory to harass Puritan clergy in England and Scotland.  This was a prelude to the Puritan Revolt. For instance, James I believed that he was ordained to serve “the weal of the people.”  This was weal as defined by the king, with no regard for the “the will of the people.”

Summary of Rutherford’s teaching.  Samuel Rutherford was in many ways the heir and expositor of John Knox (1513-1572).  In the previous century, Knox’s preaching  left an indelible imprint on Scottish society.  Knox  rightly rejected Calvin’s dalliance with natural law.  He insisted on the submission of the ruler to the law of God alone.  This was confirmed by the ordination oath.

Knox departed from Calvin in teaching the right of the people to rebel against tyranny.  They had this right whether or not they were led by the lower magistrate.  Rutherford followed Knox closely in Lex Rex, which was written in 1644.  He wrote to refute a treatise on the Divine Right of Kings by John Maxwell. Calvin had taught that the people are limited to passive resistance when ordered to disobey the direct commands of God.  However, it was the duty of the lower magistrate to interpose between the people and the tyrant.  At the same time, Calvin taught that elders were to be elected by the people. This bottom-up approach was transplanted into the civil realm in the republican model.  Officials were elected by the people, but then ruled by the Bible.  By shifting ruling power to “the people”, Rutherford was planting the seed of incipient democracy.  Thus, he undermined the very republicanism he wanted to defend.

Implications for subsequent history. Rutherford was a direct challenge to the 17th Century theory of “Divine right of kings.”  But neither he nor Knox had much direct effect on the founders of America. Their indirect influence, however, was profound via successors who secularized their theories. Historian Richard Greaves observes, “Following biblical precepts as he understood them, he [Knox] extended the right of rebellion against idolatrous and tyrannical sovereigns from magistrates and nobility to the elect.” (24). This is the heart of democracy. Reformer George Buchanan  took the next step.  “He followed Knox in granting the whole people the right of revolution, but differed in making it more of a natural political right than a scriptural, covenantally defined religious duty.” (25).

It came a short time later from another less orthodox son of the Puritans, John Locke.  The Americans followed Locke in both the Declaration of Independence and the Constitution. They placed the “just power” of government in the “consent of the governed.”  In the U.S. Constitution the governing authority of God is replaced by “we the people.”  Also, the biblical requirement for the ruler to swear loyalty to God and to govern by the Bible is forbidden (Art. XI, Clause 3).  Across the Channel, Rousseau traced this path into an even more radical version of the social compact.  It ended in the lawless and bloody coup known as the French Revolution.

Biblical analysis. Rutherford deserves praise for teaching that the king is subject to the law of God.  The Bible has nothing but scorn for those who “frame mischief by a law.”  It asks rhetorically, “Shall the throne of iniquity have fellowship with thee?” (Ps. 94:20). Deuteronomy 17 is the classic passage in defense of Lex Rex.  There the king is charged to “read therein all the days of his life: that he may learn to fear the Lord his God to keep all the words of this law” (Deut. 17:19).  Sadly, Rutherford diluted this strong doctrine by placing the source of ruling power in “the people.”  This was an over reaction to the Divine Right teaching that kings answer to none but God.  He quotes much Bible in defense of this position.  It is our opinion that he has not compared Scripture with Scripture to arrive at a balanced doctrine of civil authority.  It is true that God grants “the people” the privilege of nominating their rulers in both church and state (Deut. 1:13).  But they are then vested with governing power by God alone in accord with Rom. 13:1.  This occurs with the ordination or “swearing in” ceremony. This proscribes the people rising up en mass, or as lone assassins, to overthrow “the Lord’s anointed.”  Even David was constrained from killing Saul when given the chance.  Their appeal must be to God in prayer and to the lesser magistrate.   We find this model repeatedly in the book of Judges.

Corrective or prescriptive actions. We must not fail to adopt Rutherford’s stress on God’s Law as our only political standard.   But cast off his notion that authority resides in the people rather than God. This lies at the heart of secular theories of social contract and democracy.