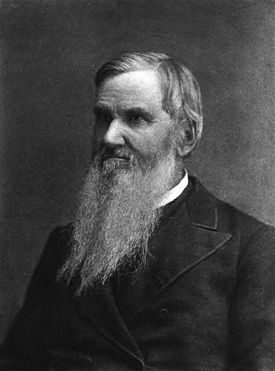 There was probably no theologian who articulated the *theological and sociological issues underlying the War Between the States better than Robert Dabney. Prior to the War Tocqueville had noted that *discrimination against blacks was strongest in states where slavery had never been known. Black *Codes in the North forbade Negroes to vote, enter into contracts, and *defend themselves in court. *Segregation extended even to participation in the Lord’s Table in Northern churches. Except for a tiny minority, Southern blacks and whites lived together in social harmony. The Bible forbids *man stealing and slave trading as practiced by the North, but does not condemn a system of *patriarchal slavery such as existed in the American South. Thus, Northern condemnation of the South on this issue represented the most flagrant *hypocrisy. Dabney warned against the *abolitionist demand for violence as the only means to deal with the slavery issue. He condemned the *egalitarian spirit of the abolitionist movement, but acknowledged that the South lost the war as the just punishment of God for the sins of the nation.

Who was Robert Dabney? (1820-1893) Robert Dabney was a Presbyterian clergyman who served as chaplain on the staff of General Stonewall Jackson during the War Between the States. He authored several books, including the Life and Campaigns of Lieutenant-General Thomas J. Jackson (1866) and A Defense of Virginia and the South (1867).

Historical context. As America entered the 19th century, the Puritanism that had first taken root in Massachusetts migrated Southward, replaced by Unitarianism and Transcendentalism in New England. The capture of Harvard by the Unitarians in 1805 was a pivot point in this regional shift. The Unitarians denied the Divinity and lordship of Christ, thus opening the door for entrance of a messianic civil government. In the ensuing years, Northern legislators began to agitate for centralization of power at the national level, fueled by the imposition of heavy import duties. The tariff of 1828 was known in the south as “the tariff of abominations”. The drive for centralized power was successfully blocked by Southern statesmen for many years until just before the War. Meantime, slave ships out of New England plied the waters between West Africa and the Americas. On numerous occasions Southerners officially protested the slave trade in the nation’s capital, to no avail. Most were thus constrained to purchase the hapless captives in order to deliver them from their wretched condition and make them part of their extended household.  The Slave Trade Act of 1807 officially abolished the slave trade in America, but the illegal trade continued unabated in the North right up to the Civil War.

The generally benign nature of Southern slavery is documented in the 40-volume Slave Narratives, commissioned by Franklin Delano Roosevelt during the great depression. The Narratives consist of verbatim interviews with over 2300 former slaves, the vast majority of whom spoke with nostalgia for plantation life and fondness for their former masters (1). This powerful direct evidence of the Patriarchal and familial character of the Southern slave system has been ignored, suppressed and distorted in the historiography of the era.

However, about five percent of the former slaves spoke bitterly of brutality and abuse they had suffered, typically on plantations in the deep South. It was an emphasis on this tiny minority of genuine abuse by outside observers that led to heightened tensions between North and South prior to the Civil War. Chief among these were Charles Dickens’ American Notes, Harriet Beecher Stowe’s Uncle Tom’s Cabin and William Lloyd Garrison’s The Liberator. With tempers on all sides thus driven to a fever pitch, the spark for war was provided by the seditious activity of John Brown at Harper’s Ferry. Brown and a band of would-be liberators captured the Federal arsenal at Harper’s Ferry in hopes that the slaves would rise to their defense. The hoped for slave uprising failed to materialize and the arsenal was retaken by an army detachment led by Robert E. Lee. Brown was subsequently tried and hanged for murder, but the Northern press turned him into a martyr for liberty.

Biblical analysis. The Bible has much to say about slavery and the Christian’s response to it in both a biblically covenanted society and in a non-Christian society. The Old Testament prescribes a system of temporary slavery or indentured servitude to provide for the payment of debts and restitution for various crimes. For example, “If a man shall steal an ox, or a sheep…he should make full restitution; if he have nothing, then he shall be sold for his theft.” (Ex. 22:1,4). The New Testament on the other hand, outlines rules of behavior for Christians who find themselves living in a non-Christian culture in which permanent chattel slavery may be the norm. “Masters, give unto your servants that which is just and equal; knowing that ye also have a Master in heaven.” (Col. 4:1). “Chattel” means “moveable possession”.

Contrary to the popular humanist perspective now in vogue in the United States, the Bible does not describe slavery, per se, as “a hideous moral evil”, on the same level as, say abortion. In fact, Christians in such a society may own slaves or servants as long as they are treated kindly and fairly. The New Testament does not even require eventual release (cf. Philemon), although a dominion-oriented Christian would be wise to implement the Old Testament system and purchase slaves with the goal of moving them through a seven-year program of training in responsibility, with the goal of freedom. However, the Bible condemns man-stealing or kidnapping for the purpose of enslavement.

Summary of Dabney’s teaching. Robert Dabney understood these principles better than most, if not all American theologians. Dabney provides us with perhaps the clearest theological analysis of the War Between the States. Here is his indictment of Northern hypocrisy before the War:

It is one of the strange freaks of history, that this commonwealth [the Confederacy], which was guiltless in this thing, and which always presented a steady protest against the enormity, should become, in spite of herself, the home of the largest number of African slaves found within any of the States, and thus, should be held up by Abolitionists as the representative of the ‘sin of slaveholding;’ while Massachusetts, which was, next to England, the pioneer and patroness of the slave trade, and chief criminal, having gained for her share the wages of iniquity instead of the persons of the victims, has arrogated to herself the post of chief accuser of Virginia.”(2)

Before the War Dabney warned against the evil of revolutionary abolitionism, which insisted on violence as the only way to deal with slavery. He discerned that the abolition movement grew out of a spirit of egalitarian Democracy, which was in conflict with biblical and constitutional law and society.

If the South was in the right, why then did she lose the war? In Dabney’s words, “A righteous God, for our sins toward Him, has permitted us to be overthrown by our enemies and His” (3). For example, the laws of the South did not authorize marriage among slaves nor punish fornication or rape of black women by whites. Nor was separation of slave families proscribed in law. Although these sins may have been rare, the failure of the South to implement the Bible’s legal regulation of slavery could not help but provoke the judgment of God. The great irony is that in her victory the North lost also, in that she was now free to pursue the path of centralization and tyranny unhindered by Southern restraint. God had given her over to her sin.

Implications for subsequent history. The defeat of the South has had profound socio-political repercussions that may be felt to the present day. The old Southern – largely Christian – culture was destroyed to be replaced by a radical humanism. The North imposed martial law and dealt with the South vindictively during the so-called Reconstruction period. After the assassination of Lincoln, President Andrew Johnson resisted this spirit and was impeached by the radical Republicans for his effort. The Thirteenth Amendment to the Constitution was passed, outlawing the system of indentured servitude required by the Bible for restitution in cases of crime or debt. “Neither slavery nor involuntary servitude, except as a punishment for crime whereof the party shall have been duly convicted, shall exist within the United States, or any place subject to their jurisdiction.” Thus, the humane system of biblical, household servitude was abolished in favor of the dehumanizing and inhumane prison system, run by the state.  The original 13th Amendment – the Corwin Amendment – passed by an all-Northern Congress just 40 days before the Civil War actually guaranteed slavery in every state.  This makes a lie of the assertion that the War was fought to abolish slavery..

Corrective or Prescriptive Actions: The modern prison approach to criminal justice must eventually be replaced by the biblical system of restitution by means of indentured servitude. This will require repeal or modification of the 13th Amendment.  Convicted offenders who refuse to submit to such a system of restitution and rehabilitation are to be executed, according to Deuteronomy. 17:12 (cf. also I Tim. 1: 8-11).