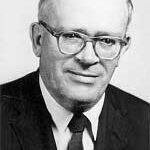 Richard Weaver was a conservative prophet against the atrocities of World War II and FDR’s drive for centralization.  He traced the ragment- ation, specialization, and crassness of modern life back to 14th Century nominalism.  Nominalism spins a web of social decadence in denying universals and limiting reality to sense perception.  We might call this the “Weaver’s Loom.”  He thought property rights could stem the tide.

Who was Richard Weaver? Richard Weaver (1910-1963) was a farmer and English teacher at the University of Chicago.  He is best known for his book Ideas Have Consequences (1948).  The stock market crash of 1929 touched off the “Great Depression.”  For most Americans socialism seemed to be the only cure that could “save free enterprise from itself.”  Ideas Have Consequences gave hope to those lonely souls who stood against Roosevelt’s New Deal after the crash.  Thus, it earned him the title “Father of the American Conservative movement.”  Weaver looked back with wonder at its success after a decade.  But he  was still a cynic about reform.  “The tendency to look with suspicion upon excellence, both intellectual and moral, as ‘undemocratic’, “shows no sign of diminishing.” he lamented.

Historical context. Leaders of the early 20th Century were moved by the vision of political Darwinism.  They sought power to direct the forces of evolution via social engineering.  The stage was set in 1913 with a triple blow to freedom in the United States.   That year marked the start of economic controls like the Federal Reserve and the graduated income tax.  Another assault came in the direct election of Senators (17th Amendment).

The United States set out on its long experiment with neo-socialism as the alleged cure for the stock market crash of 1929.

It was punctuated by use of an atomic weapon on non-combatants to end the war (1945). Ideas Have Consequences appeared in 1948 as a critique of the new barbarism.

Summary of Weaver’s teaching.  Though not a  Christian, Richard Weaver stood as a prophet against the failure of modernism.  He traced the decline of the West to the loss of transcendentals in the late 1400s.  William

of Occam was the man “who propounded the fateful doctrine of nominalism.”  To him we could add cohorts such as Aquinas, Descartes and Bacon.  Recall that the antithesis of nominalism is philosophic realism.  Realism points to universals such as Plato’s “forms” as the source of truth.

Flowing from this new model, Weaver indicts a number of social cancers.  These include our loss of social form and modesty, our egalitarianism, and our worldliness.  Mental errors like equating of fact and truth, and our mindless specialization of knowledge do not escape his ire. The model for learning has digressed from the Doctor of Philosophy in the Middle Ages.  First, it became the Gentleman of the Enlightenment, and then today’s mentally stunted, tech specialist.

Implications for subsequent history. Weaver laid the  groundwork for the American Conservative movement.  But, he errs in making “the right use of man’s reason” the cure for the social ills of the West.  He points to the need for “the renewed acceptance of an absolute reality.”  But, he fails to make God’s Word the source of that reality. Egalitarianism forces a naive leveling in a supposed classless society.   Weaver traced the baleful effect of this breakdown in social aristocracy and form.  It leads to an easing of taboos, scatology and at last a culture of pornography. These were the trends that came with the French Revolution.  They have become more and more the norm in western culture.

Even Weaver did not foresee the attacks on private land that emerged toward the end of the 20th Century.  However, the ubiquity of the property tax in 1948 should have been ample warning.  Weaver lifted up private property as the bastion of freedom.  It had not yet in his day felt the harmful effects of government intrusion.  At the turn of the 20th Century even that bastion was crumbling.  It could not hold up under bureaucratic rule making, federal set-asides and outright theft.  Abuse of rights is often excused as environmental protection or protecting the people from drug runners.  As in the days of the Norman conquest, the king’s forests belong to him alone.  The penalty for “killing the king’s deer” is now very steep.

Biblical analysis. The dominion mandate was given to the family, not to the civil leader (Gen. 1:28).  Weaver

does not couch it in terms of the Bible.  But he is correct in scolding the civil ruler for placing a heavy burden on the family.  The Bible certainly defends a hierarchical social structure.  It requires submission to superiors and kindness to inferiors (Eph. 6:1-9). The leveling trend of the democratic spirit is foreign to Scripture.  Moreover, the Bible forbids government running roughshod over  property rights.  “The prince shall not take any of the inheritance of the people,, Ezekiel declared, “thrusting them out of their property….” (Ezek. 46:18).

Corrective or Prescriptive Actions: There is much to learn from Weaver’s critique of the Western cultural malaise.  But, diagnosis is only half a cure. Conservatism,  fails to address basic spiritual problems.  Thus, it can only make the disease worse.  Nothing short of a nation’s return to the Bible can affect the cure.