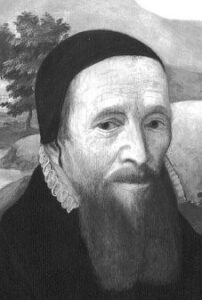 Richard Hooker wrote Of the Laws of Ecclesiastical Polity in response to attacks on Anglican church government. Hooker argued that the Bible is vague about the form of church government. Thus, it is subject to natural law as interpreted by the king. This makes the king head of the church and accountable to no earthly authority. Thus, Hooker gave theological justification to the Divine Right of Kings in England.

Who was Richard Hooker? Richard Hooker (1553-1600)  wrote Of the Laws of Ecclesiastical Polity, one of the classics of the Elizabethan age.  He was educated at Oxford and became rector in the Anglican Church in 1581. The book had a profound effect on  church and state during most of the 17th Century.  The book grew out of a  debate between Hooker and Walter Travers.  Travers was his colleague at the Temple Church in London. Hooker, an Anglican, preached the morning sermon.  Travers, an uncompromising Puritan and Presbyterian, preached the afternoon sermon. The two had family connections and maintained a spirit of civility.  But their differences became more and more obvious. Trouble started brewing in March of 1586 when Rev. Travers began to critique Hooker’s morning sermons on salvation.  For instance, Travers denied Hooker’s claim that under certain conditions a Papist might be saved. The debate heated up and Travers was finally banned from the pulpit until he was ordained by an English Bishop.  This he was unwilling to do. In defense of his doctrine, Hooker went on to write Of the Laws of Ecclesiastical Policy (18).

Historical context. Hooker wrote Of the Laws of Ecclesiastical Polity (1594) during the reign of Elizabeth I. As noted above, the book responded to attacks of a Presbyterian pastor, Walter Travers, on Anglican Church government. Anglicanism was the church established and paid for by the English crown.

Summary of Hooker’s teaching. Richard Hooker was the theological lapdog for the Stuart monarch’s theory of the divine right of kings. According to this theory, the ruler got his office directly from God and therefore answered to no one but God. Hooker was an Arian, a theology that reduced the earthly Lordship of Christ.  Thus, Lordship was granted instead to the king.  Arians taught that Jesus was created by and  under God the Father like any man.   In reducing Christ, Hooker also elevated man.  He even declared that “God hath deified our nature” by virtue of our union with Him.

The king was very nearly deified.  In this Hooker was a disciple of Thomas Erastus.  Erastus  taught the total subjection of the church to the state.  By contrast, the Reformers said they were co-operative, but separate.

James I took this to mean he would rule for the common weal, not the common will. That was, of course, a common weal defined by the King alone.  It was enforced by his church courts, known as the “High Commission.”

Implications for subsequent history. The theory of Divine Right was a recipe for tyranny in England during most of the 17th Century. The overbearing reigns of James I and Charles I filled the first half of the century.  Charles II and James II were in the last half.

Oliver Cromwell’s Protectorate fell in between, offering a 5-year respite (1653-1658).  That breeze of toleration ended  with his death and the brief reign of his son.  Oliver Cromwell was the Christian general who led Parliament against the tyrant, Charles I.  He also presided over the king’s execution. The Glorious Revolution of 1688 snapped the chains of tyranny.   William & Mary of Holland seized the English throne. The backbone of British despotism was broken when James II vacated the throne.  But the resulting compact  gave another form of unjust power to Parliament. For instance, the great legal analyst, William Blackstone, put Parliament on the throne of God.  Parliament “can, in short, do everything that is not naturally impossible;” said Blackstone, “and therefore some have not scrupled to call its power, by a figure rather too bold, the omnipotence of Parliament.” (19)

Divine Right theory found an ally in the top-down structure of the Roman and Anglican churches. Thus, all the Stuart kings were aligned with one or the other of these.  They pursued hundreds of Protestant leaders to the stake.

Biblical analysis. The Bible opposes the theory of Divine Right.  The power of the Hebrew king was subject to the Word of God (I Sam. 15:22, 23).  He was also subject to the checks and balances of other officials (I Sam. 14:45). The Bible does not teach that the king has no “earthly” restraints, but answers to God alone.  For instance, the Hebrew king was sustained and restrained in his rule by a Senate of elders (Num. 11:16, 17).  There was also a House of Commons (Num. 10:3), usually called the “congregation.”

Besides this horizontal division of power, the Bible also lays out a system of graded courts.  In these power divided vertically between Moses and the tribes (Exod. 18). This federal system relieved Moses of the total burden of government.  It also served to diffuse and localize authority.

Corrective or prescriptive actions. A Bible system of checks and balances woven into the structure of civil government is a vital safeguard against tyranny.  Such a system is built into the U.S. Constitution.  But even that system is not enough to forestall an encroaching tyranny.  That is because the government has divorced itself from the authority and protection of God.  Any nation that refuses to enter into formal covenant with God opens itself to the risk of a divine right dictator.