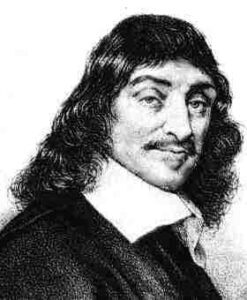 Descartes was obsessed with the most basic question of philosophy. How do we know what we know? He was plagued with the idea that a malicious demon might be deceiving him about his own existence. Finally, he concluded “I think, therefore I am”. From there he went on to prove the existence of God and the world by deduction. Thus, he shifted the starting point for knowledge from God to man.

Who was Descartes? Rene Descartes (1596-1650) was a French philosopher and mathematician.  He is known as The Father of Modern Philosophy and The Father of Modern Science. Descartes was first among the three Continental rationalists (also Leibniz & Spinoza).  He   wrote Discourse On Method (1637) and Meditations (1641). His famous dictum was “I think, therefore I am.”  It elevated the mind of man above Revelation as the starting point for knowledge. Ironically, Descartes himself ridiculed this bent toward autonomy (self-law). “Good sense is of all things in the world the most equally distributed,” he noted in the Discourse, “for everybody thinks he is so well supplied with it, that even those most difficult to please in all other matters never desire more of it than they already possess.”  With this approach he had a tendency to view living things as machines.  It also led him toward a mechanistic view of math and science.  Descartes believed there were only two substances.  There are 1) thinking substances (mind) and, 2) extended substance (body). Once Descartes tried to explain his mechanistic philosophy to Queen Christina of Sweden.  She protested that she had never seen a watch give birth to baby watches. Descartes was left speechless before the Royal logic.

Historical context. The bitter struggle between the Catholic throne and the Huguenots was nearly 100 years old.  It was then that Descartes “went into his stove” (room with a stove) to receive his Cogito (1619-20).  His Cogito was the maxim, “I think, therefore I am.”  The struggle in France was philosophical as well as martial.  The Huguenots produced Vindicae Contra Tyrannos (1579) and the Catholics produced Descartes.  The latter was the guiding light by which Rousseau and Voltaire pointed the way to the bloody French Revolution (1789).

Summary of Descartes’ teaching. Descartes was obsessed with the idea that he was being deceived about the nature of knowledge. He even fretted that an omnipotent demon could be fooling him.  The nature of reality and even his own existence was in doubt. How could he be sure he wasn’t just dreaming? Descartes hit upon the axiom “I think (or doubt), therefore I am.” I must think even to be deceived. The impossibility of denying this first principle was the proof he needed of his own existence.  This became the starting point of all knowledge for Descartes.

From there he went on to “prove” deductively the existence of God.  He used a variation of Anselm’s ontological argument to do this. “Ontological”  refers to the nature of being. This may be reduced to a simple logical syllogism. The mind can conceive of the idea of a perfect being and existence is an attribute of perfection.  Such a perfect being must therefore exist. If God exists, the material world must therefore exist. This proof of God’s existence has also been called the “proof by definition.” It is a deductive, a priori approach, which proceeds from general to specific.  By contrast,  an inductive, a posteriori approach proceeds from specifics to general conclusions.

Implications for subsequent history. Many have challenged Descartes opening premise, “I think, therefore I am.”  They contend that it proves only the existence of thought, but not existence itself.

Slowly the world began to move away from reliance on God and His revelation.  Here is the source of Jefferson’s “self-evident” truth.

Descartes was a devout Roman Catholic who thought that he was bolstering the Christian faith. Instead he undid it and freed philosophy from the Bible.  He turned Anselm’s dictum on its head: “I believe in order that I may understand.” Descartes’ approach is called “Rationalism” because it seeks the source of truth within the mind.  By contrast “Empiricism”  seeks truth in observation of things in the world.

Descartes’ contributions to math and science were great. He discovered analytic geometry and tried to define the political world with geometric precision.  Descartes looked for truth in the simplest objects – in atoms rather than God.  Thus, he opened the door for Darwin.  “I resolved to commence,” he said, “with the examination of the simplest objects.”  Combined with his focus on the individual mind this yielded also an atomistic social structure.  The individual stands alone against the state. Descartes pointed also to the Deistic God.  Having performed his necessary creative activity He retired into the background.  Thus, he left the world to function by mechanistic law.  Man came to perceive God Himself as captive to laws of His own creation.

Biblical analysis. Amos compared the Word of God to a plumb line.  It provides the only standard for truth and the only accurate picture of reality (Amos 7:8). The mind of man, being fallen cannot provide such a standard.  “There is none that understandeth.” (Rom. 3:10). Therefore, whether or not Descartes proved the existence of God, he did not prove the God of the Bible.

Corrective or prescriptive actions. The only antidote to Descartes is a return to the Bible as the source of knowledge.  However, we must not simply quote Scripture to the skeptic.  We must be able to give a defense for the hope that is within us (I Peter 3:15). “Answer a fool according to his folly” (Prov. 26:5).  Point out that Descartes being finite, did not examine all possible contingencies in the universe.  Therefore, he had no grounds for concluding that he was not being deceived.