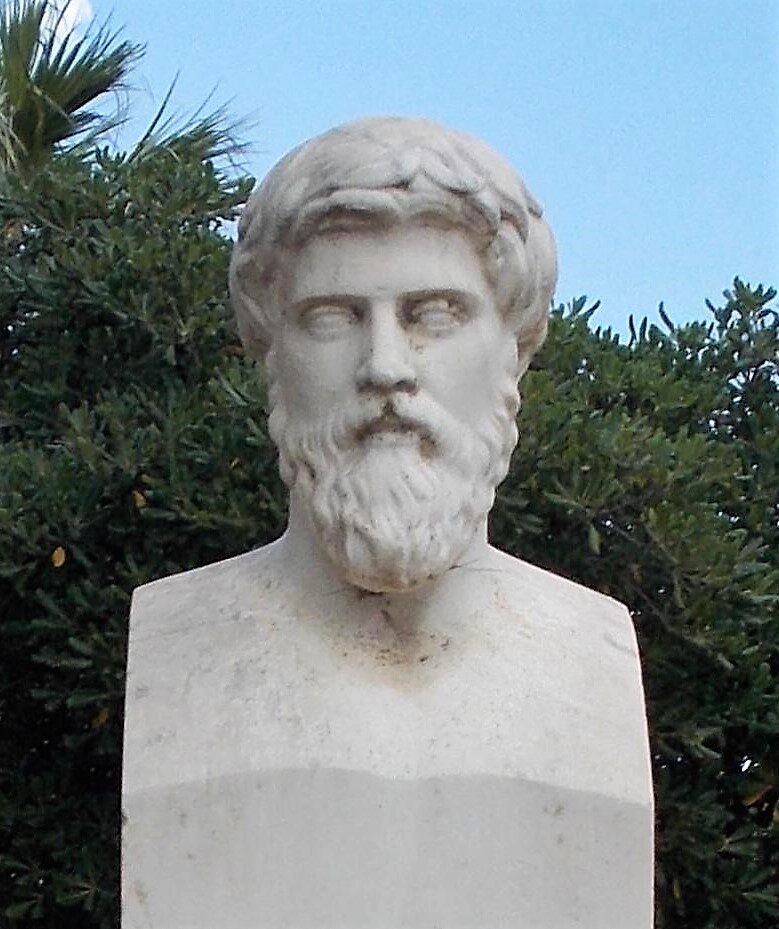 Plutarch’s Lives is a collection of 50 *biographies, mostly pairs of famous Greek and *Roman leaders, related by occupation.  For example, the Roman orator *Cicero is paired with the Greek Demosthenes.  Plutarch’s main purpose in writing the Lives was to portray Greco-Roman *Humanism in a favorable light relative to the high moral standards of an emerging *Christianity.  As a citizen of *Greece, Plutarch’s other goal was to display the influence of *Hellenism on Roman culture.  The Lives has served admirably to paint paganism with a *happy face and ennoble *classical humanism in the eyes of subsequent generations.   As early as 1637, Plutarch was placed at the heart of the curriculum at the newly instituted *Harvard College, with devastating long-term consequences.

Who was Plutarch? (46-126 AD) Greek biographer and essayist. Plutarch was educated in Athens where he became a priest in the Temple of Delphi. Later he lectured in Rome and became a city official in Chaeronea. Referred to variously as “the father of political science” and “the prince of the ancient biographers”.

Historical context. Plutarch served during the reign of emperors Vespasian, Titus, Flavius Domitian, Nerva, Trajan, and Adrian. It was Vespasian and his son Titus who subdued the rebellion of Judea. When Vespasian was chosen to become emperor in 69 AD, he returned to Rome, leaving the final conquest of Jerusalem to Titus. After a long and bitter siege, Jerusalem capitulated in AD 70, in fulfillment of Jesus’ Olivet Discourse. As Jesus foretold, not a stone of the temple was left standing because the Roman soldiers were motivated by rumors that gold was hidden in the walls. The Fall of Jerusalem was one of the most important events in world history, signifying God’s final divorce of the Jewish nation for their rejection of His Son.

All told there were 10 imperial persecutions of Christians because of their insistence that even the emperor was subject to Christ. Most of the emperors met violent deaths; some have suggested this to be the hand of God’s judgment for the persecution of His church. The empire reached its greatest extent under Trajan, although he too was one who persecuted the rapidly growing church.

Summary of Plutarch’s teaching. Plutarch’s most famous work is his Parallel Lives, in which he compares famous Greek and Roman leaders in similar callings. For example, generals Julius Caesar and Alexander the Great are paired, as are orators Cicero and Demosthenes. The work consists of 50 biographies, 4 single and 23 pairs, the pairs generally followed by a short comparative summary. One of Plutarch’s great objectives was to demonstrate to all the world the extent to which Grecian culture had been transmitted to Rome. A Greek compatriot, he desired to show how the conquered became in some sense conquerors, as many of his countrymen migrated to Rome to become administrators, artisans, and tutors of Roman children.

Another important objective was to counter the growing influence of Christianity. “In the face of the moral challenge that Christian evangelism posed to the ancien regime he wanted to reignite the moral vitality of classicism. Thus, we see in the Lives the last great gasping apologetic for Greco-Roman civilization on the threshold of an ascendant Christendom.” (1) This concern was also reflected in Plutarch’s On Why Oracles Came to Fail.

In one memorable passage Plutarch explained the social dynamic by which Republican Rome became the Roman Empire. In the midst of domestic anarchy and chaos men are willing to trade freedom for the illusion of security. The Romans turned to the absolute dictatorship of Caesar “in the hope that the government of a single person would give them time to breathe after so many civil wars and calamities. This was indeed a tyranny avowed, since his power now was not only absolute, but perpetual, too.”

Although useful for historical insights such as this, the Lives is first and foremost a biographical compilation that provides the best – in many cases the only — source of our understanding of the great men of antiquity. Rather than history, per se, the Lives are character sketches with a moral, animated by quotations and anecdotes. Plutarch sometimes accepted material of questionable historical veracity for the sake of making a point.

Implications for subsequent history. Plutarch’s Parallel Lives has been a primary vehicle for transmitting the ethos of classical pagan civilization to the modern world, both directly and often through the agency of William Shakespeare. Shakespeare followed Plutarch closely in the composition of historical plays such as Julius Caesar and Anthony and Cleopatra. Plutarch’s genial style painted paganism with a happy face; the noble spirit in which he clothed his subjects created an idealized image of classical antiquity.

Biblical analysis. The statesmen of the American Constitutional era were heavily influenced by the humanistic perspective presented by Plutarch. In 1637 Plutarch was placed at the heart of the curriculum at the newly constituted Harvard College, established for the training of Puritan ministers. Thus did American Christianity sell her birthright for a stew of classical humanism. The corrupting influence of classical humanism was such that by 1805 Harvard had abandoned her biblical distinctive in favor of Unitarianism. “Thus saith the Lord of hosts; Ask now the priests concerning the law, saying, If one bear holy flesh in the skirt of his garment, and with his skirt do touch bread, or pottage, or wine, or oil, or any meat, shall it be holy? And the priests answered and said, No” (Haggai 2:11-14).

Corrective or Prescriptive Actions. The church must abandon her idolatrous devotion to the classical writings as “wisdom literature” on a par with the Word of God.  Instead, she must analyze the classics in light of the Bible for their strengths and weaknesses in order to “take every thought captive to Christ.”  Because ideas have consequences, the classics for better or for worse have made Western Civilization what it is today.  It is vital that we reverse-engineer these ideas to determine at what point they have lured us off the Biblical path.