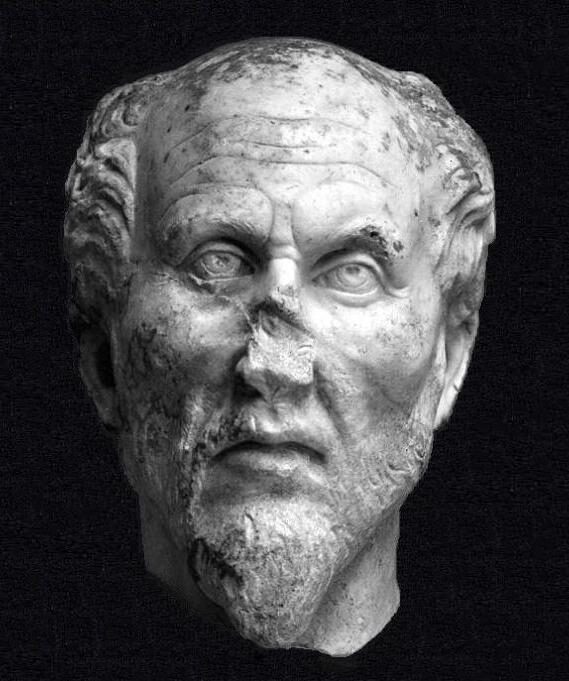 Plotinus was a third century follower of *Plato, who carried Platonism to its logical conclusion.  The goal of the Neo-Platonist is an aesthetic *withdrawal from the world in order to achieve a *mystical union with God.  God is described as a *transcendent Absolute Being, or One.  According to Plotinus’ *Enneads, the material world is a lower form of existence from which the spiritual man must strive to *escape.  The body in particular is a source of *evil, whose natural desires must be *suppressed.  The consequent disinterest in *cultural concerns leaves the world to be run by the ungodly in a *tyrannical fashion apart from the law of God.

Who was Plotinus? (204-270 AD) Plotinus was an early Roman philosopher and founder of Neo-Platonism.

Historical context. Born in Egypt, Plotinus spent about 10 years studying under Ammonius Saccas at Alexandria. Saccas was a Christian teacher and writer who had reverted to Hellenism. The admixture of Christianity and Greek thought forms he learned from Saccas was an ominous foretaste of things to come. The life of Plotinus corresponded with that of Emperor Gallienus, with whom he was on friendly terms. Gallienus ruled for some 15 years, did not disturb the Christians, and is remembered for developing a highly mobile cavalry force, which gave him two notable victories over the German barbarians. However, the army proved to be his downfall in the end; he was assassinated by some of his officers and succeeded by Claudius II, the commander of his cavalry.

Summary of Plotinus’ teaching. Plotinus believed himself to be a strict follower of Plato. He laid out his system in a series of six groups of nine books each, known as the Enneads. According to Plotinus, God is defined as a transcendent, Absolute Being, or One, that can be known only by a process of negation. That is, He can only be defined by what we know He is not, rather than by what He has revealed Himself to be. As opposed to the transcendent One and the realm of ideal forms, the material world is a lower-order of imperfection and the source of evil. The soul in its worldly exile, may achieve unity with the One by mystical contemplation and escape from the prison of the body. Wrongdoing is not a function of rebellion, but rather a lack of understanding.

When melded with Christianity, Neo-Platonism produced an other-worldly church that saw itself as representative of the spiritual realm exclusively. Individuals were encouraged to withdraw into monasteries or hermetic cells and caves to purify their souls from the contamination of the world. The goal was deliverance from the flesh, rather than from sin. The world was left to be governed by the state alone, the highest manifestation of being in the secular world. Thus, the civil magistrate is released from obligation to rule in accord with the law of God, and tyranny is given free reign.

Implications for subsequent history. At the age of 60 Plotinus was put in charge of rebuilding two destroyed towns of the Campania by the Emperor Gallienus, with the objective of governing them after the communistic model of Plato’s Republic. Campania is a fertile, resort area in Southern Italy, which includes the city of Naples. However, the project was aborted due to resistance from Gallienus’ counselors.

Nevertheless, Neo-Platonism deeply infected the church during the first millennium of the Christian era. Plotinus provided the segue by which Platonic Hellenism entered the church through his influence on Augustine, Ambrose and Boethius . Plotinus established a pattern of asceticism, pietism, and mysticism that endured in the monastery system of the early Christian church. Thus, Plotinus is the Father of speculative mysticism.  Many of his disciples were inspired to dispose of their wealth to the poor and embark on a life of strict study and pietism. Some immured themselves in caves, while others carried it to ridiculous heights.   A group known as the Stylites lived out their lives on tiny platforms at the top of tall poles.  Somebody quipped that the real saints were those who changed the bedpan.

In seeming contradiction to this radical individualism, the communistic aspects of Platonism have manifested themselves at various points in church history. This would include the Catholic monasteries, the Anabaptists of the Reformation era, and more recently the Liberation Theology movement.

Biblical analysis. Jesus commanded His disciples to mix with the world in order to function like salt as a preservative (Mt. 5:13). In His High Priestly prayer in the Upper Room He asked His Father “not that Thou shouldst take them out of the world, but that Thou shouldst keep them from the evil.” Paul also instructed the church at Corinth to avoid keeping company with unrepentant sinners in the church, while at the same time to befriend such that were in the world. The rationale he gave was that otherwise “ye needs go out of the world.” (I Cor. 5:9-13). This, and much more, speaks against the neo-Platonic isolationism of Plotinus.

Concerning the communistic economic system advocated by Plato and Plotinus, we need to carefully analyze the situation in the early church recorded in the fourth and fifth chapters of Acts. When believers sold their property and laid it at the Apostle’s feet, it was a voluntary sharing of goods, far different than the coercion associated with the Platonic system of communism. This is evident in Peter’s words to Ananias after he held back part of what he had sold. “Whiles it remained, was it not thine own? And after it was sold, was it not in thine own power? Why hast thou conceived this thing in thine heart? Thou has not lied unto men, but unto God” (Acts 5:4).

Corrective or Prescriptive Actions. Believers should vote against any scheme or person who would take money from their neighbor’s pocket book and transfer it to someone else.  That is theft by majority vote.  At the same time we should involve themselves in the world in order to meet whatever needs we can with the means at our disposal.