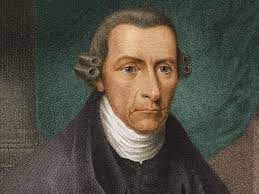 Patrick Henry’s “give me *liberty or give me death” speech provided the impetus for the key state of *Virginia to enter the war for independence from Britain.  Some 13 years later he stood as the chief *obstacle to ratification of the proposed U.S. Constitution, being promoted aggressively by the Virginia *aristocracy.   The Constitution, he feared, was an illegal *centralization of power, made without the approval of the state *legislatures in the name of “the people.”  Moreover, it presumptuously substituted the spurious authority of  “the people” for the authority of God in *establishing the new government.  This was reflected not only in the exclusion of the very mention of God in the document, but in its ban on any religious *test for public office.  Patrick Henry fell just short of victory in the Virginia ratifying convention and the Constitution became the law of the land.  The Holy *Commonwealth was officially abandoned and a new commitment to secularized *pluralism was adopted in its place.

Who was Patrick Henry? (1736-1799) Patrick Henry was the first governor of the new Commonwealth of Virginia and member of the Continental Congress. Henry was an articulate leader in the cause of American Independence and James Madison’s principle antagonist in the battle against adoption of the U.S. Constitution.

Historical context. Despite the protests of economist Adam Smith, Britain was committed to a mercantilist economic policy, one facet of which was an exploitive posture toward her colonies. A growing litany of abuses, included quartering of English troops in American homes, supposedly for purposes of protection. A series of taxes had been imposed — one of which led to the “Boston Tea Party” – and finally the Stamp Act, which led to Patrick Henry’s famous call for a break with Britain. These taxes had been imposed without consent or representation in the British Parliament.

After the Revolution, the 13 colonies were governed by “The Articles of Confederation” until 1787. At that time a Constitutional Convention was called to propose revisions in the Articles because of alleged weaknesses. Among other things, these included a weak executive, plus no power to regulate currency and high protective tariffs imposed by several of the states. The Convention usurped the power to propose an entirely new Constitution and present it to the people, rather than the state legislatures, for ratification.

Patrick Henry emerged from the back country of Western Virginia. His ancestors had only recently sailed to America from the unruly border regions of Scotland and England as part of the Scotch-Irish migration (1). These people cherished a form of natural liberty that was offensive to the Royalist sympathies of the Eastern Virginia aristocracy, These sympathies had developed during the long tenure of Sir William Berkeley (1642-1676) as governor of Virginia.

Summary of Henry’s teaching. Patrick Henry was a man devoted to the Bible. “The Bible is a book worth more than all the other books that were ever printed.” was the way he described it. He was more forthright than most of the founders in his devotion to Christ. “This is all the inheritance I can give to my dear family,” he said at the end of his life, “The religion of Christ can give them one which will make them rich indeed.”

Moreover, his religious commitment was not limited to his private life, but extended to his involvement with the Anti-Federalist cause. “…Arguing from history, they [Anti-Federalists] charged that a republican government was more than a mere institutional design for representation. Rather, they said, it must also touch the character of the citizen. The Anti-Federalists believed in the positive role of government in both public morality and religion” (2).

Amid a life of extraordinary accomplishment, two high water marks emerge. The first is Henry’s famous call to arms speech on the eve of the American Revolution. Even in today’s jaded culture, there are few who do not thrill to Patrick Henry’s words based on the Book of Jeremiah: “Gentlemen may cry peace, peace!—but there is no peace. The war is actually begun! …What is it that gentlemen wish? What would they have? Is life so dear, or peace so sweet, as to be purchased at the price of chains and slavery? Forbid it, Almighty God! I know not what course others may take, but as for me: Give me liberty, or give me death!” Animated by his wife’s death only a month before, Henry’s speech was so impassioned that Virginia immediately passed his resolutions and entered the conflict.

The second highlight came some 13 years later during the debates over ratification of the U.S. Constitution. Henry had felt earlier that the Constitutional Convention was up to no good and refused an invitation to attend, declaring “I smelt a rat”. In debate he opposed the Constitution on the grounds that it was “a revolution more radical than that which separated us from Great Britain.” He recognized the radical nature of establishing governing authority in “we the people.” “Give me leave to demand,” he thundered, “what right had they to say, ‘We the People,” instead of ‘We the States’? If the States be not the agents of this compact, it must be one great consolidated national government of the people of all the States…Had the delegates, who were sent to Philadelphia a power to propose a consolidated government instead of a confederacy? The people have no right to enter into leagues, alliances, or confederations: they are not the proper agents for this purpose.”

Implications for subsequent history. Like a decommissioned lighthouse on a barren and rocky coastline, the testimony left by Patrick Henry reminds us of the fatal course we have chosen over 200 years after his stirring words echoed in the Virginia House of Burgesses. After the ratification battle was over, Patrick Henry urged submission, but his warnings have proven to be prophetic. The price of rejecting the Holy Commonwealth has been high, paid in the blood of thousands of U.S. soldiers which stain the soil from Gettysburg to Iwo Jima and Afghanistan. Paid in the blood of 30 million aborted babies sacrificed on a Baalish alter. Paid in the toil of a people weighed down by the chains of bureaucracy and confiscatory taxation. “Wherefore I gave them also statutes that were not good, and judgments whereby they should not live;” said the Lord, “And I polluted them in their own gifts, in that they caused to pass through the fire all that openeth the womb, that I might make them desolate, to the end that they might know that I am the Lord.” The hand of God’s judgment rests heavy on America to the end that she might repent and return to the ancient covenant.

Biblical analysis: The U.S. Constitution was a clear departure from the Holy Commonwealth ideal established by the Puritans under John Winthrop. This was especially evident at two points, 1) its substitution of the governing authority of the people for that of God and, 2) its scrapping of the requirement that federal officials bind themselves by oath to govern in accordance with biblical law (Article VI, Section 3). Other flaws in the document could be mentioned, but these two alone are sufficient to brand the Constitution as a heretical departure from the pattern for civil government outlined in the Bible. This pattern may be detected at many points including II Kings 11:17 where “Jehoida made a covenant between the Lord and the king and the people that they should be the Lord’s people; between the king also and the people.” Patrick Henry recognized the covenant-breaking character of the proposed constitution and fought it with all his strength in the Virginia ratifying convention. He fell just short of victory.

Corrective or Prescriptive Actions: In Hosea 8:4 God complains that His people “set up kings, but not by me.” The right of the people to select their own political leaders is contingent on their prior covenant with God and the authority of His law. Republican elections must flow out of, or occur in the context of, the covenant relationship with God or they are spurious and will eventually dissipate in corruption. As the prophet Isaiah observes, “The earth also is defiled…because they have…broken the everlasting covenant.” (Is. 24:5). The path of reform is clear but will be followed only by a people willing to renew the long-neglected covenant with God, trampled underfoot in Philadelphia so many years ago.