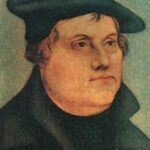 Martin Luther demanded a spiritual solution to the problems created by a corrupt church. Luther found no relief for his guilty conscience in the Papacy’s perverted system of works-righteousness. He finally found peace when he received by faith the gift of righteousness God offers in Christ. Luther sparked the Reformation by nailing his “95 Thesis” to the Wittenburg Door. These challenged specific beliefs of the Papacy.

Who was Luther? Martin Luther (1483-1546) was born to a poor peasant family.  His father managed as fortunes improved to provide for his training as an Augustinian monk. He became an instructor at the University of Wittenberg.  On that door he posted his famous “95 theses” in protest of Papal indulgences (1517). He thereby triggered the Protestant Reformation. After many complaints and debates with church officials, the Pope finally kicked Luther out of the church. All Christians were forbidden even to look at him, let alone listen to his preaching. After learning his books were being burned in Rome, he organized a dramatic act of protest. He decided to fight fire with fire.  Students  at Wittenburg emptied the library shelves of all Romish books.  Then they lit a great bonfire, singing as the books went up in smoke. Finally, Luther himself cast the Papal Bull of excommunication into the fire.  With that he issued a curse.  “Because you have corrupted God’s truth,” he said, “may God destroy you in this fire.”  Next day he declared any would be denied salvation who failed to renounce the Pope. The monk had excommunicated the Pope.

Historical context. The Roman Catholic Church was deeply stained by the Renaissance and lapsed into a gross system of works righteousness. “tickets to heaven” (indulgences) were actually being marketed in Germany and elsewhere.  They were funding the Pope’s art and building projects in Vatican City.

Summary of Luther’s teaching. God graciously revealed to Luther the way of salvation by faith in Christ alone.  This came in a flash of insight from the book of Galatians (3:11): “The just shall live by faith” (solo fide). Luther in Bondage of the Will made a strong case for the sovereignty of God.  He exposed the Arminian view of man’s alleged free will in salvation.  It is a question of whose will is first and final – the will of God or the will of man.

Luther was summoned before Charles V, the Holy Roman Emperor.  His views were condemned on May 25, 1521. Luther himself was granted short-term freedom under a “safe conduct.”  He was almost at once spirited away by his protector, Frederick the Wise.

Implications for subsequent history. Luther’s work restored the basis for redemption and liberty in Christ. As Jesus had declared, “Ye shall know the truth and the truth shall make you free.” (John 8:32). Spiritual liberty before God, extended into all areas of life. For instance, the Reformation restored the doctrine of the “priesthood of the believer.”  It also raised the dignity of common labor in every realm. This led to the “Protestant work ethic” and unleashed a flurry of creativity in all areas.

Sadly, Luther failed to apply the liberty of the gospel to the civil arena. This was because of the debt he owed for his very life to the German electors.  He tended to adopt a passive, hands-off policy toward the civil ruler. Luther did groundbreaking work in soteriology (study of salvation).  But the Lutheran doctrine of the state aided the alleged independence of the ruler from the Bible.  Legal historian Harold Berman reports that “The Lutheran reformers…explicitly denied that it was the task of the church to develop human law. This Lutheran skepticism made possible the emergence of a theory of law – legal positivism – which treats the law of the state as morally neutral, a means and not an end, a device for manifesting the policy of the sovereign and for securing obedience to it.” (13). This is opposed to the Bible doctrine of law as a negative, restraining force.  Its purpose is to  hold back the sin of man

It remained for other streams of the Reformation to fully develop the Bible doctrine of civil rule.

It was not long before Rome launched the counter-Reformation.  It was led by Jesuit Ignatius Loyola in response to Luther’s challenge. This included some actual reform of morals.  But also the brutal Inquisition, was set up to force confession of heretics by torture. The Vatican also fomented war against rebel states.  That included Spain against Holland and the Thirty Years War in northern Europe.

Biblical analysis. There are no neutral-zones in the universe exempt from the rule of Christ  The natural man may not retreat, cross his fingers and declare an autonomous “kings-x” from God. This includes especially the civil realm. The 47th Psalm says “He shall subdue the people under us, and the nations under our feet.” This refers to godly rule under the law of God, not a so-called “tyranny of the saints.”

The trend toward statism in Lutheran nations was made worse by Luther’s disciple, Melencthan.  He threw out Luther’s strong teaching on the control of God in all things. When God is thus reduced as Sovereign, the state tends to be lifted up by men to fill the social vacuum.  This is a rogue state without the law of God (antinomian). When men pursue this brand of folly, God in turn gives them over to tyranny.  Tyrants must rule men who will not be ruled by God.  Israel proved this when she rejected God as King (I Sam. 8).

Corrective or prescriptive actions. The church must not fail to preach the “primitive” gospel.  This involves faith in the death and rising again of Jesus Christ for salvation.  Beyond this, the church must address the demands of God’s law to all areas of life including the civil ruler.  Failure to do so will result in devastating lapses back into tyranny.  Luther’s Germany became the home of biblical “higher criticism” and Nazism in the 20th Century.