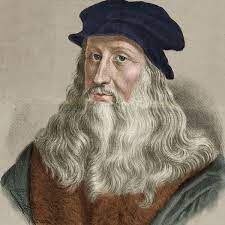 Born into the High *Renaissance, Leonardo da Vinci is known as the consummate “Renaissance Man”.  Leonardo could do it all.  He was a proficient *scientist, contributing studies in circulation of the blood, vision, *meteorology, geology and aerodynamics.  Failing to find enduring satisfaction with his scientific work, Leonardo turned to the contemplative life of the *painter, hoping to find ultimate meaning in the *forms of the fine arts.  In this too he was met with *frustration, unable to realize universal truth on the humanistic base.  Leonardo started many projects, but left many *unfinished in his *quest for peace and meaning; he died a despairing man in the palace of King Francis II of *France.  In this he was representative of the humanistic Renaissance and pointed ahead to the *disillusionment that would overtake humanism in the 20th century.

Who was Leonardo? (1452-1519) Leonardo Da Vinci was gifted in so many areas – mathematics, painting, science, architecture, anatomy, botany, engineering, music – that he is known to all the world as the consummate “Renaissance Man.” He was born in the little town of Vinci just outside Florence, the son of a wealthy notary who was able to provide him with the best education. He was handsome, erudite, and persuasive.

Historical context: Thomas Aquinas believed that the will of man was fallen, but not his mind. This led to the vaunted Renaissance optimism in the rationality of man, as being sufficient to work out the answers to the ultimate meaning of life, apart from revelation. Thomas sought to develop this in terms of Aristotle’s emphasis on the particulars. In other words, by studying individual items or aspects of nature, he believed that men could arrive at truth inductively. This thinking was reflected in the realistic detail of the Renaissance painters. By the mid-1400s the futility of this approach was becoming evident and the avante garde of Florence were turning again toward Plato to provide the long-sought universals. The flight of neo-Platonic scholars from Byzantium when the eastern empire fell to the Turks in 1453 accelerated this trend. Leonardo was raised in this tradition.

Leonardo served for a time as chief engineer in the army of the tyrant Cesare Borgia, the top general of Pope Alexander VI. Taking Borgia as his contemporary model and imperial Rome as his historical model Niccolo Machiavelli later (1513) derived a set of principles for gaining and maintaining political power elucidated in his book The Prince.  This philosophy was a factor contributing to the emergence of the nation-state, independent of the law of God.

Summary of Leonardo’s work: Florence and Milan provided the stage on which most of Leonardo’s career was played out. He was patronized by the Medici family and of them he said, “The Medici created and destroyed me” (The Notebooks, Ib. 46). During his early life in Florence he painted The Adoration of the Magi and Saint Jerome both of which were left unfinished.

Milan was the scene of his early military activity, as an Engineer in the service of the duke of Milan, Ludovico Sforza. Here also he took on pupils, compiled notebooks, and labored on his masterpiece, The Last Supper.

Back in Florence he enlisted as chief engineer under Cesare Borgia in the war against Pisa. It was during this second Florentine period that he painted his famous Mona Lisa, which he carried with him the remainder of his life.

Summoned again to Milan he designed a military monument which was never constructed. Shortly after he drew his famous self-portrait. The years 1514 to 1516 found him a resident of the Vatican where he conducted many of his scientific experiments, recorded in The Notebooks (1508-1518).  These included studies of blood circulation, vision, meteorology, geology, hydraulics and the effect of the moon on tides. He was most likely the inventor of the hydrometer and many other machines, including proposals for a flying machine.

Implications for subsequent history: Leonardo pointed ahead to the ultimate despair of humanism. His gifting was in a profound way his cursing because it enabled him to grasp the futility of life without God. As a mathematician Leonardo knew that a study of the particulars made possible by mathematics could never lead to ultimate meaning, but only to mechanics: an understanding of how things work, but not why. Consequently, he looked for meaning in the creative expression of art. As a student of Plato he sought to arrive at the universal through his painting, but ended up just as frustrated as before. Although his paintings were comparatively few, his style had a profound influence on art for the next hundred years. “Leonardo tried to paint the universal, thinking that a painter might be able to achieve what the mathematicians could not,” observed philosopher Francis Schaeffer, “but he never was able to paint the universal on a humanistic basis….” (1)

Perhaps this is why he was notorious for leaving so many of his works unfinished. None of his many projects could fill the void in his restless soul, so he was constantly dropping one thing and moving to the next in hopes that this at last might bring satisfaction. He looked forward to a happy life and serenity at death: “As a well-spent day brings happy sleep, so life well used brings happy death” (The Notebooks, Ib) But alas, he died in despair, in the palace of King Francis II of France. His pessimistic outlook was perhaps best summarized by this passage from The Notebooks: “Man and animals are merely a passage and channel for food, a tomb for other animals, a haven for the dead, given life by the death of others, a coffer full of corruption.” (vol. I, ch. I).

Biblical Analysis: “For what shall it profit a man if he shall gain the whole world and lose his own soul “ (Mt. 16:26). Sadly, the life of Leonardo Da Vinci exemplifies this verse. Leonardo had it all: education, fame, fortune and most of all incredible gifting. Few men have enjoyed the abilities of Leonardo in so many different areas. And yet because he attempted to live his life apart from God, all these things profited him nothing. He died in despair in a foreign land, having seen that man in and of himself is incapable of arriving at ultimate meaning.

Corrective or Prescriptive actions: It is better to focus on developing a single talent than to spread our life so thin that we risk accomplishing little or nothing in the end.