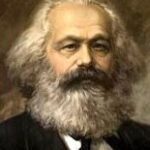 Karl Marx interpreted Adam Smith’s “labor theory of value” to mean that value is determined strictly by the units of labor in production. Capital adds nothing to value, so the capitalist is by definition exploiting the workers. Thus, class conflict is inevitable. Workers must throw off the yoke and set up a temporary dictatorship of the proletariate. In the USSR the proletariate was horribly oppressed by the hammer & sickle.

Who was Karl Marx? Karl Marx (1818-1883) was a German political philosopher and revolutionary. He was of Jewish stock, but his father converted to Christianity. He wrote the Communist Manifesto (1848) and Das Kapital (1867). Marx was co-founder (with Frederick Engels) of the worldwide Communist movement of the 20th Century. The supreme irony of Marx’s life was that he was supported in his writing career against capitalism by Engels.  The latter was the son of a wealthy factory owner and a capitalist.  “When commercial capital occupies a position of unquestioned ascendancy,” Marx declared, “it everywhere constitutes a system of plunder.” Thus, Marx lived a parasitic existence.  He drew substance from his host, all the while draining its lifeblood. In 1841 Marx left the pietistic Christianity of his youth almost overnight and published a poem (Oulanem).  This led pastor Richard Wurmbrand to conclude that he had made a pact with the Devil.  Till I go mad and my heart is utterly changed. / See this sword – the Prince of Darkness sold it to me. / For he beats the time and gives the signs. / Ever more boldly I play the dance of death (53).

Historical context. Darwin’s Origin of Species shook the world in 1859.  Its evolutionary ideas clearly bolstered Marx’s call to revolution.  The same was true of Hegel’s historical dialectic early in the century. The dialectic was an unending process of history by which a thesis clashed with an antithesis to produce a synthesis. The synthesis became the new thesis for the next round of conflict. Marx relied heavily in Das Kapital on anecdotal evidence of worker oppression brought on by the birth pangs of the Industrial Revolution.  This was made worse by government rules and a resulting loss of capital and savings.  These came on top of long-term growth in the number of people.   Marx had little effect until the success of the Russian Revolution in 1917 thrust him into the limelight.  That was some 34 years after his death.

Summary of Marx’s teaching. “From each according to his ability, to each according to his needs,” is the socialist credo.  It was made famous by Karl Marx.  Marx said that  capitalist social order is oppressive by its very nature. Under Marx’s “labor theory of value” a product has value strictly by the units of labor used to make it.  Capital adds nothing to the process.  And so, the bourgeois capitalist does nothing more than exploit the labor of the proletariat. Thus, class struggle cannot be avoided and leads only to revolution.  This is welcomed as part of a social cleansing process.   It is a throwback to the “chaos religions” of antiquity.  These required a return to primeval chaos as a prelude for the rebirth of society.  They were acted out in the Greek Dionysis festivals.

Implications for subsequent history.  The coffee house musings of Karl Marx and Frederick Engels in 1848 had a  fearful outcome.

In setting up this regime, Vladimir Lenin pointed to the reason the French Revolution failed.  Robespierre had been too lenient during the Reign of Terror.

The world’s most fearsome tyranny did not wither away as Marx foretold.  Rather it fell under the weight of its own corruption with the tearing down of the Berlin Wall in 1991.  As with Shelley’s Ozymandius, all proud tyrants who defy God and man are doomed.  Ozymandius was an obscure ancient tyrant whose broken statue was found in a desert ruin.  An inscription arrogantly boasted of his power.  Both Marx and Engels were sons of bourgeois, middle-class families.  This was therefore a revolution of the capitalists masked as a revolution of the workers.

Western intellectuals lauded the triumph of Communism while turning a blind eye to its atrocities.  Thus, most of the Western democracies have adopted milder forms of Marxian socialism.  These are referred to as a “mixed economy.”  This is an economy that claims to combine the fruits of free enterprise with the alleged superiority of central planning.  Government meddling in the market acts like a submerged “boat anchor.”  It impedes progress and slowly drags the vessel under.

Biblical analysis. “The fool hath said in his heart there is no God” (Ps. 14:1).  That is the Bible’s response to Marx’s aphorism that “religion is the opium of the people.”  The biblical state limits itself to enforcing the “shall nots” of  the 10 Commandments.  It does not parade as the source of social salvation by enacting “positive law.”  Instead, it limits itself to nurturing a culture of freedom.  In this setting men are motivated to produce, compete, trade and donate to the needs of the poor.  The Bible’s “poor laws” are the only viable option to the socialist, welfare state.  That includes things like gleaning (Lev. 19:9), poor loans (Deut. 15:8), indentured service (Lev. 25:39,40) and gifts.

Corrective or Prescriptive Actions: Dreams of socialist utopia can only emerge from the social vacuum produced by a lifeless church.  The church must rise from her Platonic slumber to address the needs of the whole culture and the “whole man.”   Jesus Himself served the physical needs of his countrymen.