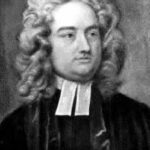 Gulliver’s Travels is an insightful allegory of Enlightenment man. Gulliver (Gullible) is shipwrecked and embarks on four voyages explor- ing various aspects of the enlightenment faith. He is bound by tiny bureaucrats, enslaved by giant socialists and soars into the clouds with air-headed educrats. At last he learns the lofty aspirations of Enlighten- ment rationalism (Houyhnhnm) cannot tame human depravity (Yahoo).

Who was Jonathan Swift? Jonathan Swift (1667-1745) was an English clergyman and political satirist.  He devoted much of his career to defense of the Irish against the English.  He was very popular in both nations.  Swift was well-known for his wry humor and pithy wisdom. “May you live all the days of your life” is one example, and “Every man desires to live long, but no man would be old” is another.  One day when out on foot he was trapped by a thunder storm under the shelter of a large tree. Soon he was joined by a rough-hewn tramp and a very pregnant young woman. Swift learned that they were on the way to a nearby town to be married.  Without ado, he offered to perform the ceremony on the spot.  As the storm subsided, the couple started to take their leave.  Just then the new husband recalled that a document would be needed to confirm the union. Swift obligingly wrote: Under an oak, in stormy weather; / I joined this rogue and whore together; / And none but he who rules the thunder / Can put this rogue and whore asunder(36).

Historical context. Gulliver’s Travels was published in 1726 as the European Enlightenment was dawning.  The previous century – 1603 to 1714 – has been termed by some historians “The Century of Revolution.”  The secular, but “Bloodless Revolution” of 1688 had taken  the place of the Puritan Revolution of 1649.  It was a revolution not only of arms, but of ideas.  The Bible’s authority as a widely accepted fact of life was displaced by a kind of rationalistic secularism. The Enlightenment — in reality a revival of the Renaissance — was the result. The Renaissance was strongest in south Europe and the Reformation in north Europe.  But now the Enlightenment swept the entire continent. This was a revival of the ancient Greek idea that “man is the measure of all things.”   There was no room for God’s Revelation.

Summary of Swift’s teaching. Although Swift authored over 230 titles, we focus on Gulliver’s Travels.  Swift owes his fame to this book in the popular mind. Enlightenment traits are personified in the reasonable scientist/physician, Lemuel Gulliver, a variant of “gullible.” “As a type of the 18th century, Gulliver reveals its major values.  Chief among these was trust in rationality and Locke’s idea of the mind as a tabula rasa, or blank slate” (37).  This leads to the perfectibility of human nature and  the march of progress.  As the tale unfolds, Gulliver’s faith in the certain emergence of utopia is shaken by the real story behind the Enlightenment

He first falls into the hands of a petty, but powerful  bureaucracy.  They dwell on the shores of a desert island, which speaks of  the 18th Century “exile” of God.   It is really the exile of man.  Gulliver slept in the sands of this isle after the shipwreck of his faith.  Upon waking, he slowly becomes aware that he is enslaved.  Barely noticed at first are the cords of thousands of binding rules.  The bureaucrats advance by “leaping & creeping.”  They provoke endless wars, whose original purpose they can scarcely recall.

Seen from another angle, the bureaucrats are giants who enslave the citizen and exploit his services. This is justified by the queen in the name of socialism.  In Brobdingnag “each takes his share and none goes hungry.” A vacuous intellectualism replaces biblical wisdom on the flying island of Laputa.  This is a “pie-in-the-sky” academia.  Here the prince’s real-world wisdom is despised.  Specialized, inductive scientism is lauded instead.  All kinds of worthless projects are pursued.  The Academy extracts “brain taxes” from the countryside, which lies in ruins.  It revises history and offers a seductive pseudo-salvation.  When Gulliver drinks from its fountain he enters a surreal land of mindless repetition.  He comes face-to-face with the fact that in spite of great learning he is evading the truth.  In Book 4 we find the bankruptcy of rationalism (Houyhnhnm) in the face of human depravity (Yahoo).  Rationalism is the belief that all truth may be derived from reason alone.

Implications for subsequent history. Sadly, the irony of Gulliver’s Travels is lost on modern man.  He takes it as a clever, but eccentric attack on the progress of rationalism and the  march to utopia. Swift’s attack on rationalism is sometimes seen as a defense of irrationalism or obstructionism.  Others focus on minutia and overlook the obvious. The West has yet to recover from its 18th Century detour into secular rationalism.  Swift’s work stood as a warning then and a watchword now.  It speaks to those groping for the ancient paths of biblical rationality. Rationality is the right use of reason to interpret God’s world through the grid of God’s Word.

Biblical analysis. Swift described his motive in Gulliver’s Travels in a letter to a friend. “I have ever hated all nations, professions, and communities; and all my love is toward individuals; for instance, I hate the tribe of lawyers, but I love counselor such a one.” Likewise, the Apostle Paul despised the works of the Judaizers, but was willing to suffer hell for the sake of his brethren (Rom. 9:3).  In the words of Paul, Enlightenment man is “ever learning, but never able to come to the knowledge of the truth”  (II Tim. 3:7).  Thus, he constructs a society of slavery.

Corrective or Prescriptive Actions: We must follow Swift’s example in loving the individual sinner who crosses our path, no matter how much we despise the collective works of humanity apart from God.