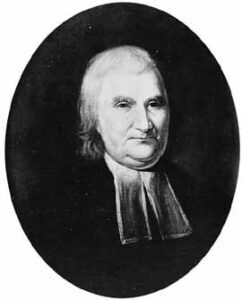 Scottish Common Sense Rationalism rose to counter the irrationality of the left-wing Enlightenment. This right-wing Enlightenment was carried to America by Pastor John Witherspoon, who was invited to be Presi- dent of the College of New Jersey (Princeton). He taught many found- ing fathers the principles of the social contract. Their only application of Scripture was checks & balances to limit man’s sinful abuse of power.

Who was John Witherspoon? (1723-1794) John Witherspoon was a pastor and activist of the American Revolution.  He was recruited from Scotland to serve as President of the College of New Jersey (Princeton) in 1768.  Witherspoon had served as a Scottish pastor for 23 years.  He was a signor of the Declaration of Independence.  He also served in the Continental Congress for six years.

Historical context.  The Bible covenant was set up in America by Puritans fleeing James I.  The Stuart tyranny was cast out in 1688.  But, other secular factors had begun to take hold via the writings of the “British Commonwealth Men.”  These were Sydney, Harrington, Milton, Locke, and Newton, among others.  These currents stirred deeply in Scotland to produce the right wing Enlightenment.  It reached America through Witherspoon and even the Puritans themselves.  Its guiding lights were Adam Smith and Thomas Reid, among others.

Summary of Witherspoon’s teaching. Witherspoon’s effect on the founding fathers was eclectic, but profound. In signing the Declaration Witherspoon placed his church authority between tyrant and people.  As a pastor, he taught the depravity of man.  This was seen in the deep distrust his pupils had in the power of civil government.   Thus, they built their famous system of checks and balances into the Constitution.  In spite of his theology, Witherspoon’s philosophy was speculative rather than biblical.  “The central tenet of Witherspoon’s political philosophy in common with those of other American revolutionists was the theory of the social contract.”  Those were the words of his editor Jack Scott.  Scott went on to say that “It was Lockean political ideology that under-girded and animated the American Revolution and that permeates every sentence of the Declaration of Independence” (44). The social contract lies at the heart of American democracy.   Ruling power is granted by “we the people”, rather than God.  Democracy means “rule of” the “people.”

There is no lack of naïve Christians who try to extend Witherspoon’s Bible influence on the Constitution much further.  Lawyer and author John Eidsmoe is typical.  He tries to make Witherspoon the missing link between Lex Rex and the American founders.  “He devoted his life to instilling the principles of Holy Scripture into the minds    and souls of young men” said Eidsmoe, “who then used those principles to shape America” (45).  However, a brief review of Witherspoon’s senior class notes shows how weak this link is.  It makes us wonder if men like Eidsmoe have even taken time to scan the Lectures.

Not long before, Scottish empiricist David Hume had injected a radical skepticism into philosophy.  He denied the ability of the mind to perceive the outside world.  Thus, he wiped out the very basis of scientific cause and effect.  In response, Reid and the Scottish Realists called on men to use common sense to reject Hume.  Reid said this should be self-evident to the mind.  He assumed that all men possess a common wisdom or “moral sense.”   Thus, Reid placed the court of reason above the Bible as the source of truth.  “The Rationalists retreated from God’s law in favor of a reliance on natural law and scientific principles for the development of political society” (46). Thus, Christian leaders like Witherspoon were lured into the orbit of the right-wing Enlightenment.  It was a knee jerk reaction to the left-wing flight from logic.

Implications for subsequent history. James Madison is known as the “Father of the U.S. Constitution.”  If that is so, then John Witherspoon is surely its grandfather.  Nine of the 55 delegates to the Convention had been taught in person by Witherspoon.  He served as president of the College of New Jersey for 26 years (1768-1794).  Of his 478 graduates, 13 became  governors and three Supreme Court judges.  He also graced Congress with  20 Senators and 33 Congressmen.  Plus, Aaron Burr served as Vice President and James Madison as President.

Biblical analysis. Witherspoon’s indirect impact on the  Constitution is profound. However, to extend his  biblical influence beyond the checks and balances is a grave mistake.  In spite of this helpful input, Witherspoon’s

Enlightenment finger print is far greater and more damaging. It is not off target to state that he indirectly led America to break covenant with God.  The direct agency was his pupil, James Madison.  He replaced the ruling power of God with  “we the people” .

Corrective or Prescriptive Actions: Witherspoon’s Social Contract gives organic structure and power to the U.S. Constitution.  The Puritan concept of covenant with God is nowhere to be found.  It was obvious in such documents as the Mayflower Compact. The Social Compact is clearest in the Preamble.  It says that “We the people…do ordain and establish this Constitution.”  But, it is also evident in  Article VI, Section 3 casting off  the religious test oath.   These features must be replaced by language of commitment to God and His Word