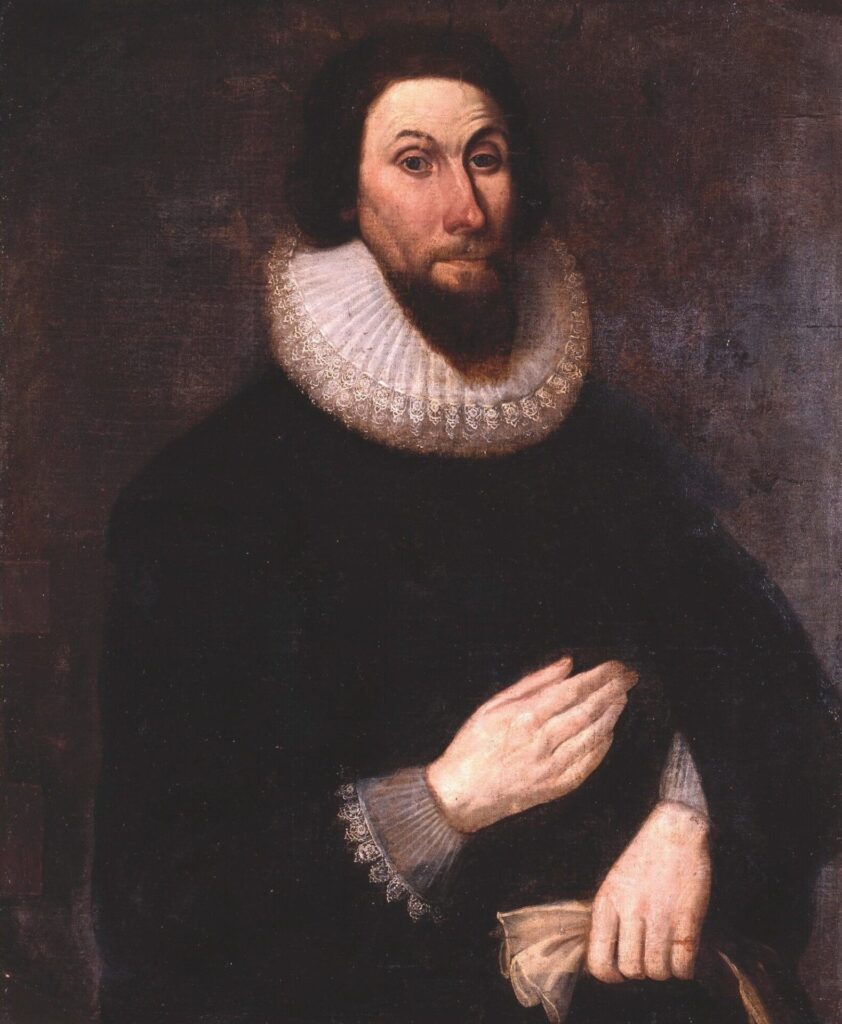 The first major migration of British to the New World – The Great *Migration – was led by John *Winthrop in 1630.  Winthrop subsequently served as *governor of the colony.  As set forth in his Model of Charity sermon on board the Arbella, Winthrop set forth his intention to establish a *civil government based on *covenant with God.  Participation in the government of the new colony was restricted to covenanted *church members and the Abstract of the Laws of New England was accompanied by specific *biblical annotations.  Winthrop established a concept of liberty as the freedom to live in the blessing of *obedience to the commandments of God.  Unfortunately, the covenant model established by Winthrop was gradually undermined and eventually abandoned in the Constitutional settlement of *1787.

Historical context. Renaissance monarch and Catholic sympathizer, Henry VIII had established the Church of England with himself at its head in the early 1530s. The Puritans, English adherents of the Reformation who sought to purify that church, agitated for reform, but the church resisted. The church’s drive to suppress Puritanism melded with the doctrine of the Divine Right of Kings in the reigns of James I (1605-1625) and Charles I (1625-1649). William Laud, Archbishop of Canterbury became the official agent of persecution under Charles. Laud’s zealous persecution prompted the Great Migration of Puritans to New England between 1630 and 1641, the first wave led by John Winthrop.

Summary of Winthrop’s teaching. The concluding remarks of his Model of Charity sermon delivered on board the Arbella capture John Winthrop’s vision for New England: “Beloved, there is now set before us life, and good, death and evil in that we are commanded this day to love the Lord our God, and to love one another to walk in His ways to keep His Commandments and His ordinance, and His laws, and the articles of our covenant with Him that we may live and be multiplied, and that the Lord our God may bless us in the land whither we go to possess it…For we must consider that we shall be a city upon a hill. The eyes of all people are upon us….” (1)

In this brief summary, Winthrop articulates the Puritan intention to covenant with God as a “New Israel” to govern in accordance with His law. Winthrop expressed his belief that the Puritans were intended by God to be like “a city set on a Hill”, a model of civil and ecclesiastical government for the rest of the Christian world. During the course of his governorship he would oversee the efforts of Pastor John Cotton (his maternal grandfather) and Pastor Nathaniel Ward to draft the civil code for the Massachusetts Bay colony. Both the Body of Liberties and the Abstract of the Laws of New England, were given scriptural annotations by John Cotton (2).

“Later, on December 10, 1641, the Massachusetts Bay Colony adopted a biblically based civil code authored by Nathaniel Ward (another Christian pastor) and given scriptural annotations by John Cotton. It was called the Body of Liberties, and it explicitly provided that no law was to be prescribed contrary to the word of God.” (3)

Later in his Little Speech on Liberty (1645), Winthrop provided the classic definition of liberty he envisioned for America, so different from the libertine impulse to choose whatever one wants, whether it be good or evil. “This liberty,” he said, “is incompatible and inconsistent with authority, and cannot endure the least restraint of the most just authority.” True liberty he insisted is the freedom to obey the commandment of God, “a liberty to that only which is good, just, and honest…it is of the same kind of liberty wherewith Christ hath made us free.”

Implications for subsequent history. Unfortunately, the New England experiment in covenanted civil government was short-lived. The pivot point (and the point of friction) of the civil covenant was the restriction of the right to participate in civil government to covenanted church members. Winthrop, supported by the theological authority of John Cotton, was determined to maintain a political theocracy based on a church franchise. In other words, only men in personal covenant with God as evidenced by their subjection to the discipline of the church, were qualified to lead in a Biblical civil government. This was distinguished from an ecclesiocracy in which the rulers of the church rule also in civil government. Winthrop was adamantly opposed to democracy, which he described as “the meanest and worst of all forms of government” (4)

Pressure for change arose almost immediately within the Congregational churches of the Boston area, who were not themselves bound together by the principle of covenantalism. There was also pressure from powerful Boston area merchants who were excluded from political participation. Nonetheless, the model for biblical government contained in the Body of Liberties was adopted by all of the early colonies, the only exception being Rhode Island. Their constitutions embraced the covenant model all the way up to the Constitutional Convention in 1787, when the covenant principle and the religious test oath were overturned at the federal level.

This set the stage for their eventual abandonment at the state level. At that point the model for pluralistic anarchy modeled by Roger William’s Rhode Island was complete.

Biblical analysis. Winthrop cited the blessings and cursings of Deuteronomy 28 in his Model of Christian Charity sermon on board the Arbella enroute to America. As long as a people continue in obedience to God they will be blessed, but when they depart into disobedience they will experience His curse. America is presently experiencing the curse of the Almighty because she has departed from the theocratic covenant with God established by her founder John Winthrop.

Corrective or Prescriptive Actions: John Winthrop and his Puritan band have left an enduring historical model of what biblical civil government should look like. John Cotton’s Abstract of the Laws of New England deserves careful study by all those who take seriously the biblical injunction to disciple the nations. In it, we find specific examples of the application of the law of God to a civil code. Some we may reject – such as the Puritan fascination with price fixing — but the work as a whole is a model for the ages.