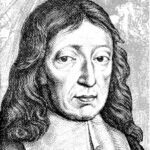 John Milton was one of the British Commonwealth Men – spokesmen for the Whigs – during Oliver Cromwell’s Protectorate. Parliament won the battle against Charles II. Men like Milton described features of the of the new republican model. But they ignored the Bible, thus creating a secular view of life in England. For example, Milton’s view of freedom of the press did not account for biblical limits.

Who was John Milton? John Milton (1608-1674) served as “Secretary for Foreign Tongues” under the Protectorate of Oliver Cromwell.  His duties were to draft and translate official letters and to defend the Puritan regime. He was a master of prose and poetry.  This included his epic poem, Paradise Lost. It came out in 1667 after the failure of the Puritan revolt.  Its purpose was to “justify the ways of God to men.”  Milton became totally blind about 1652.  He was able to keep on with his writing career with the aid of a helper.  But, his mood swung between being content and despair.  Milton for the most part was able to sweeten the bitter “taste” of blindness with music and friendship. “Such sweet compulsion doth in music lie,” he wrote in Arcades (l. 68). One time the Duke of York, a follower of Charles I, visited him.  Milton had condoned Charles execution by Parliament.  The Duke suggested that his blindness might be the judgment of God for his defense of Charles’ death.  “If Your Highness thinks that misfortunes are indexes of the wrath of heaven,” Milton said, “what must you think of your father’s tragical end? I have only lost my eyes – he lost his head.”

Historical context. Milton wrote his great political prose between 1640 and 1660.  It grew out of his service to the parliamentary cause under Cromwell. His fame and clout was greater than even Harrington among the 17th Century Whig Commonwealth men. His work is the more notable because of being blind the last 22 years of his life.

The name “Whig” apparently came from the scornful “Whigamore.”  It was given first to the Presbyterian covenanters of Scotland.  Later it was pinned on the conservatives opposing the Stuart kings in England.  As in America, what the parties stand for has reversed.  The Whigs are today known as the liberals and the Tories (crown party) are the conservatives.

Summary of Milton’s teaching. One of the first big events to trigger a defense from Milton’s pen was the execution of Charles I. His apology for Cromwell’s regicide appeared as The Tenure of Kings and Magistrates (1649).  Here he set out to prove “that it is lawful and hath been so held through all ages, for any, who have the power, to call to account a Tyrant, or wicked King, and after due conviction, to depose and put him to death.” Later, with the Restoration of Charles II looming, Milton wrote The Ready and Easy Way to Establish a Free Commonwealth (1660).  This was a blueprint for a long lasting, republic. After that hope was dashed by the Restoration, Milton penned Samson Agonistes (1670).  His purpose was to inspire the deposed Puritans to victory through seeming defeat.

The one time when Milton took a stand against Parliament was the “Printing Ordinance” of 1644.  It required that all publications pass by a government censor. In response, Milton wrote Areopagitica (1644).  His intent was to defend not only freedom of the press, but political tolerance in general.  This was a foretaste of 20th Century pluralism.  Milton was one of the first modern writers to push for secular, government education for all.  His views about divorce and disbanding the clergy were also less than orthodox.

Implications for subsequent history. Milton was Puritan by birth and generally orthodox.  However, his work is tainted by a strain of humanism.  Paradise Lost (1667) has been generally acceptable to Protestant readers.  But, Milton elsewhere rejected predestination and the Trinity.  According to Douglas Bush, “Milton may be called the last great exponent of Christian Humanism in its historical continuity, the tradition of classical reason fused with Christian faith which has been the main line of European development” (27).

This dream came to life in the secular republic set up by the Bloodless Revolution of 1688.  James II was driven from the throne by William & Mary of Holland.  Ironically, Mary was James’ daughter.

Biblical analysis. We will limit this brief analysis to Milton’s concept of revolution found in The Tenure of Kings and Magistrates. The biblical response to tyranny lies in prayer and in the “doctrine of the lower magistrate.”  It is the duty of the Christian to appeal to God for delivery in prayers of repentance.  And he must resist passively when ordered to disobey God. On the other hand, it is the duty of the lower ruler to lead the people against the king should conditions become unbearable. The lower ruler must be vested with lawful power from God.  This was the pattern found in the  book of Judges and other Scripture.

Corrective or prescriptive actions. There is a potential for anarchy in Milton’s theory of revolution. While quoting Scripture and church authority profusely in Tenure, the essay is tedious and unclear.  On the final page he notes, “that to do justice on a lawless King, is to a private man unlawful, to an inferior Magistrate lawful.” Yet his appeal is for “any who have the power to call to account a tyrant.”  This has led some to conclude that the “treatise is therefore a justification of extralegal revolution” (Encyclopedia Americana)