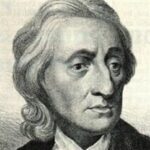 John Locke is known as the Father of the Enlightenment and the Father of the Social Contract. Locke said the mind at birth is a blank slate that is written upon by impressions from the environment. This is a form of empiricism. Thus, man in a state of nature is innocent. Governments are formed when a majority decides to give up a few rights to protect the remainder. This social contract is created with no reference to God.

Who was John Locke? John Locke (1632-1704) was reared in the family of a Puritan attorney and small landowner. Working with the Whig leader Lord Shaftesbury exposed him to more liberal ideas. He has been called the father of the social contract and the father of the Enlightenment.  He suffered much from a weak constitution.  But, he was trained as a doctor and was always ready to give free medical help to his neighbors. Locke was cheerful, sociable, fond of children and people in general.  He was noted for his genial toleration of a wide array of opinion, including religious opinion. Locke typified the spirit of the age — latitudinarianism.  “People will always differ from one another about religion, and carry on constant strife and war,” he noted, “until the right of every one to perfect liberty in these matters is conceded, and they can be united in one body by a bond of mutual charity” (34). Thus, for Locke fine points of doctrine were not so vital as to stir up the peaceful waters of friendship.  This extended even to the doctrine of the Trinity.  For “there was much similarity between the apparent opinions of Locke and the doctrines of Faustes Socinus himself….” (p. 79).  Socinus is known as the Father of Unitarianism.

Historical context. Locke’s two Treatise on Government were written in the context of the English Revolution.  Both appeared in 1690.  They are a defense of the Parliamentary side in that conflict. The first stage of the English Revolution ended in 1649.  Charles I was executed and Cromwell’s Protectorate began.  The death of Cromwell and brief reign of his son was followed by the restoration of the Stuart kings.  These were Charles II (1640-85) and James II (1685-88).  William & Mary of Holland were invited by Parliament to oust James in the Bloodless Revolution.   James suffered the humiliation of being driven from the throne by his own daughter.

Summary of Locke’s teaching. As an empiricist Locke said that the mind of man at birth was like a blank slate.

The source of power for this pact was the will of the democratic majority.  As Locke put it, “that which begins and actually constitutes any political society is nothing but the consent of any number of freemen capable of a majority to unite and incorporate into such a society. And this is that, and that only, which did or could give beginning to any lawful government in the world” (35). Notice the exclusion of God and His law as the source of authority.  Rather it is the will of the majority. Locke is emphatic that the will of the majority is the only source of power.  This is the heart of democracy, the “rule of the people.”  Moreover, in The Reasonableness of Christianity (1695) he made the Bible subject to man’s reason.  Never mind that the heart is darkened and prejudiced against God.

Implications for subsequent history. Beyond Britain, Locke’s ideas played out in the American Revolution.  Moreover, he had an indirect, but formative effect on the French Revolution through Rousseau.  Locke may be detected in the French Declaration of the Rights of Man.  The Russian Revolution of 1917 took its cues from the French.

Ironically, Locke’s Enlightenment thought made headway in America via two weighty Presbyterian clergymen.  Jonathan Edwards and John Witherspoon were both orthodox Christians.  In spite of this, they cut the legs out from under the Bible covenant in America.  The covenant model was planted on American shores by the Massachusetts Puritans.  Witherspoon was President of Princeton.  He taught a generation of American leaders the basics of Locke’s social contract.  By contrast, Edwards’ appealed to the common man.  He kindled the fires of the Great Awakening up and down the American seaboard. Sadly, Edwards tried to bolster his Bible message with Locke. Thus, he promoted the Enlightenment in the colonies without knowing it.  This is recorded by Greg Singer in A Theological Interpretation of American History.

The U.S. Constitution is without question a Lockean social contract.  It draws its power from the people rather than God.  The same is true of the Declaration of Independence.

Biblical analysis.  We search high and low in the Bible for Locke’s innocent state of nature.  “The wicked go astray from the womb,” says the Psalmist (Ps. 58:3).   Thus, civil government was born to keep man’s evil in check (Gen. 9:6).  Romans 13:1 says the source of governing authority is God alone.  It does not therefore flow from a social contract of the people.  The social contract is a parody of the Bible’s civil covenant.  In the latter, the leaders of a nation swear to govern by the Bible. This model is found in God’s dealing with Israel and the Gentile nations around Israel.  Ninevah is a good example (Jonah 3:7).  Likewise, King Josiah began his reform (II Kings 23:3) by leading the people in a formal renewal of the covenant.  He swore to govern according to the law of God.

Corrective or prescriptive actions. The revolutionary nature of the social contract must be recognized and rejected as rebellion from the rule of God.  In the long run, existing constitutions must be amended to confirm the nation’s formal submission to God.  All new officials must pledge to enforce the Bible in matters of civil justice.