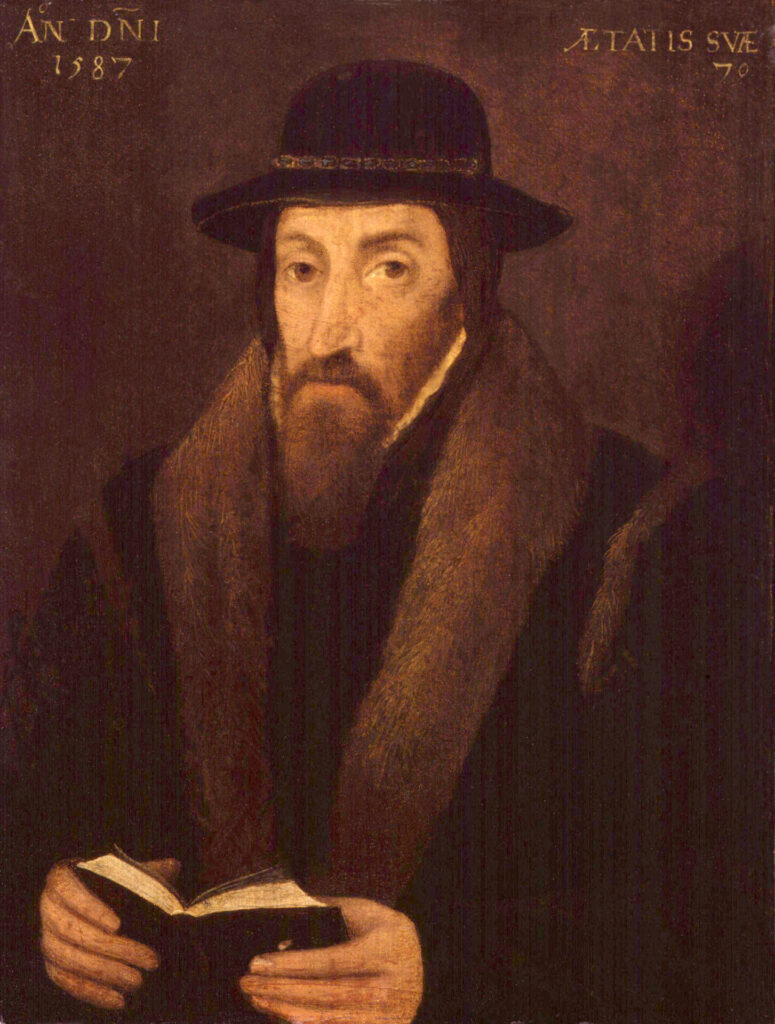 Persecution of the church ceased for nearly a *millennium following the ten *imperial persecutions of Rome and the Edict of *Milan in 313 A.D.  Corruption of the *Papacy during the Renaissance resulted in the Protestant *Reformation and renewed bloodshed of the Reformers.  The peculiar political nature of the Reformation in Great Britain made persecution there especially intense.  Foxe records the details beginning with the early sufferings of pioneers such as John *Wycliffe through the 300 burned at the stake by “*Bloody Mary.”  During the *Elizabethan era, a copy of Foxe’s Book of Martyrs was placed in every *parish church in England.  There it served to keep alive the *memory of the Romish persecutions and thus confirm the nation in the Protestant faith.

Who was John Foxe? (1516-1587) John Foxe was a Protestant clergyman who authored Foxe’s Book of Martyrs, which at one time was the best read book in the English speaking world. Foxe was a graduate of the University of Oxford and was known for his detailed investigation of the atrocities he reported.

Historical context. Henry VIII had established himself as the head of the Church of England. His male heir Edward VI was a staunch Protestant, but the young king was largely controlled by his maternal uncle, the Duke of Somerset and later John Dudley, the Duke of Northumberland. Under their administration many protestant reforms were implemented and Catholic icons were destroyed. As Edward’s health failed, Dudley prevailed upon him to sign a will making Lady Jane Grey his successor instead of either of his half sisters, Mary or Elizabeth. Lady Jane ruled as queen for only nine days before being deposed and executed by supporters of Mary, to whom she had shown great leniency. Under a misguided interpretation of the gospels, the idealistic lady Jane released her mortal enemies from prison.  Mary was a staunch Catholic and under her reign some 300 protestant leaders died by fire.

When Mary died of a cancerous womb in 1558, her cousin Elizabeth, daughter of Henry VIII’s second wife, Anne Boleyn, became Queen of England.  Elizabeth represented a “middle-way” of moderation between the zealous Protestantism of Edward VI and the zealous Catholicism of Mary. A royal cult developed around Elizabeth, the “Virgin Queen”, who ruled England for nearly half a century – an era known as the Elizabethan“ Golden Age”.

Summary of Foxe’s teaching. Foxe traced the history of persecution from the earliest days of the church giving special emphasis to that in England under Mary. The book opens with a chapter describing the persecution of the early Christians under Rome. Beginning with Nero ten Imperial persecutions are recorded. The tenth under Maxentius was brought to an end in 313 AD by his co-emperor Constantine after the Battle of Milvian Bridge. Constantine and his entourage beheld a flaming cross in the sky about dusk and heard the words “In this sign conquer.” After the battle, he issued a decree of religious toleration in the Edict of Milan that lasted for over a thousand years until the days of John Wycliffe.

Wycliffe’s efforts to translate the Word of God into the language of the people were met by persecution. The corrupt Roman church much preferred to keep it locked away from the people in the foreign Latin tongue. Following Wycliffe the stories of many famous martyrs are related including Huss, Tyndale, Luther, the martyrs of Scotland and lastly those who suffered under Bloody Mary until 1558 , a daughter of Henry VIII whose reign began in 1553.

As they suffered together, bishop Hugh Latimer spoke these famous words of encouragement to Bishop Nicholas Ridley: “Be of good comfort, Master Ridley and play the man. We shall this day light such a candle by God’s grace in England as I trust shall never be put out.”

Foxe saw the persecutions as the inevitable outworking of the war between the two humanities, which had their foundation in the sovereignty of God in the doctrine of election. “Predestination is the eternal decrement of God, purposed before in Himself, what should befall all men, either to salvation, or damnation.”

Implications for subsequent history. The persecutions of Mary yielded to the tolerance of her half-sister, Elizabeth I in 1558. During the reign of Elizabeth a copy of Foxe’s Book of Martyrs was placed in every parish church for the benefit of those who could not afford a copy. This kept the memory of Roman Catholic cruelty alive for generations and steeled the British in the battle against Spain. That battle involved assistance to Holland under Elizabeth and assistance to Protestant Germany during the Thirty Years War under James I.

Spanish atrocities in the Inquisition, the Netherlands War for Independence, the St. Bartholomew’s Day massacre, the Spanish Armada, and the Gunpowder plot are all recorded as evidence of the Papist drive for domination. Eventually, this led to the downfall of the powerful Spanish empire and the ascendancy of Protestant England to a position of world dominance. The coup-de-grace came with the defeat of the Spanish Armada in the English Channel in 1588. Phillip II had commissioned the Armada for an invasion of England, which had prevented him from conquering the Netherlands.

“In his honest and compassionate accounts of man’s search for spiritual truth, and the persecution and death that accompanied that search, John Foxe etched a detailed picture of the English Reformation that would have otherwise remained unknown. But more importantly, he has left the Christian faith of all ages a legacy of inspiration and courage” (1).

Biblical analysis. At the dawn of the third millennium the persecution of the church continues unabated around the world, primarily in Communist China and in Muslim countries of Africa and the East Indies. Jesus and other Biblical writers foretold as much. “In the world ye shall have tribulation,” said Jesus, “but be of good courage, I have overcome the world.” It is the privilege and challenge of the Christian to endure such persecution for the sake of Christ. In the Book of Revelation, the martyrs are promised a crown of life.

Corrective or Prescriptive Actions: In spite of the promise of persecution, the Biblical ideal is that Christians should live in peace and propagate the gospel. For this reason Paul exhorted the believers that “supplications, prayers, intercessions, and giving of thanks, be made for all men; for kings, and for all that are in authority; that we may lead a quiet and peaceable life in all godliness and honesty. For this is good and acceptable in the sight of God our Savior; Who will have all men to be saved….” (I Tim. 2:1-4).