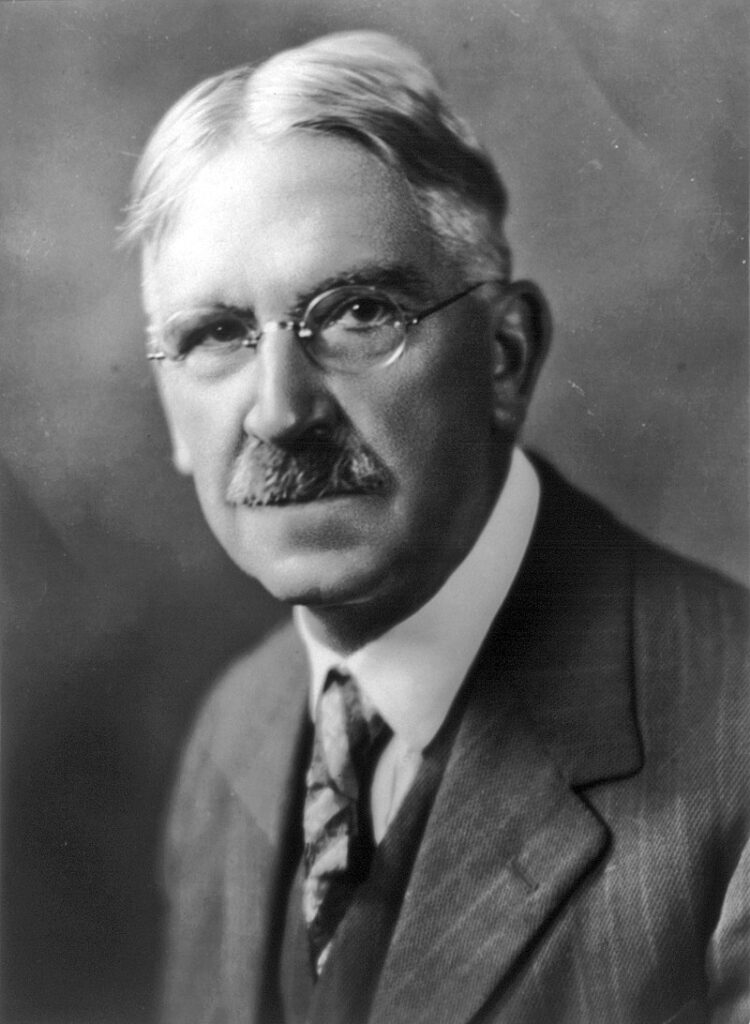 The *public school system, conceived and implemented by John Dewey, provided the engine for the dissemination of Darwin’s theories throughout the United States. Dewey was a *humanist who detested Christianity’s *segregation of mankind into Heaven and Hell as un-Democratic. He called on the church to abandon her schismatic *doctrine and join in the humanistic crusade for heaven on earth. Dewey advocated using the law as an instrument of *social evolution and commissioned the state-funded schools as centers of democratic socialization, rather than content-based education. Dewey’s incredible success in implementing his model was matched only by the magnitude of its universal *failure. The public school system spawned a spirit of pragmatic *anti-intellectualism oriented toward *career preparation. Evolution replaced God, current events replaced *history, and the career model replaced the *classical model. The cost of education skyrocketed even as its effectiveness plummeted; as the system implodes it cannot even prepare students for a career.

Who was John Dewey? (1859-1952) John Dewey was a 20th Century author and educator. From his leadership post at the University of Chicago, he introduced the principles of social Darwinism to the American education system.

Historical context. 1859 was in some important ways a watershed year in the history of America, and indeed the world. In 1859 Charles Darwin published, Origin of Species, a scientific bombshell that revolutionized not only biology, but virtually every other academic discipline. 1859 also witnessed the birth of John Dewey, the man who was to become the most effective promoter of the theory of Evolution in and through American public schools.

Within two years of John Dewey’s birth America was immersed in The War Between the States (1861-1865), a conflict that sealed in blood the principle of centralized government power. Long resisted by the South, the locus of power shifted from the states to the federal government and was confirmed in the 14thAmendment to the U. S. Constitution. The 14th Amendment elevated citizenship in the national government above state citizenship and was subsequently interpreted to impose the Bill-of-Rights on the states. The Transcontinental railway, begun in the midst of War and completed in 1869, shattered America’s sense of geographical limitations. In 1870, women were first granted the right to vote in the recently formed (1848) Utah Territory.

During the decades that Dewey came of age a new metaphysical (supernatural) outlook was taking shape in America. For the first time the option of unbelief in God (agnosticism) became a possibility (1). Darwin’s law of natural selection had presented a plausible alternative to belief in God from the argument by design. It was the scientific straw that rebellious man was looking for and he grasped and clung to it tenaciously. Thus, when John Dewey received his Ph.D. degree from Johns Hopkins University in 1884, the stage was set for his revolutionary career in education.

Summary of Dewey’s teaching. In his classic work, A Common Faith, (1934) Dewey dismissed orthodox Christianity, with its “spiritual aristocracy” of good vs. evil, saved vs. lost, Heaven vs. Hell, as the antithesis of democratic equality. In the spirit of humanistic generosity, he called on the church, beleaguered as she was by the onslaughts of science, to join in the humanistic quest for heaven on earth. “I cannot understand,” said Dewey, “how any realization of the democratic ideal as a vital moral and spiritual ideal in human affairs is possible without surrender of the conception of the basic division to which supernatural Christianity is committed” (2)

Dewey defined truth as whatever works in the context of aggressive action. Moreover, he defined law as “…the organization of energies which, when unorganized, conflict and result in violence….” Thus, he enlisted the power of the state in its role as a coercive, centralized planner to organize the energies of society. This is applied Darwinism, calling on the state to coercively accelerate and direct the forces of evolution in the perfection of the human race. An ever-evolving body of case law, progressively created by the judiciary, takes the place of fixed biblical or constitutional law. This approach, called legal positivism, was pioneered in the 1870s by Christopher Langdell, Dean of the Harvard law school and was given impetus by the appointment of Oliver Wendell Holmes to the Supreme Court in 1902.

Dewey vested the government school system with a religious commission to achieve this goal. “…under certain conditions,” he said, “schools are more religious in substance and in promise without any of the conventional badges and machinery of religious instruction than they could be in cultivating these forms at the expense of a state-consciousness (3).” Here again, Dewey put his finger on the fundamental conflict between Christianity, which refuses to let the state play god, and modern humanism.

Under Dewey the great goal of education becomes democratic socialization, rather than a content-based education. The child is valued less as an individual, but more as a “social animal” in the great chain of evolutionary progress. Adaptation to citizenship in the socialistic group becomes primary. Paradoxically, Dewey denounced capitalism, although in its raw form it seems to comport best with the survival of the fittest. Nonetheless, capitalism thrives on freedom, a concept definitely not in step with the necessity of centralized planning in Dewey’s system. On the other hand, Dewey denounced the excesses of Communism, while simultaneously promoting its goals under the guise of “Democratic Liberalism.”

Implications for subsequent history. From his post as head of the Education Laboratory School at the University of Chicago, Dewey flooded the American government schools with his disciples. Thus, he gave to Darwinism, in all of its manifestations, a much broader exposure than it might otherwise have received. Dewey’s theories have had a number of devastating practical consequences in the classroom. The emphasis of Progressive education on practical action and outcomes led to a spirit of anti-intellectualism. The older classical model of education, which had produced so many intellectual giants in the past was abandoned. In particular, the study of history was downplayed, because it allegedly has nothing to do with practical action in the present. Moreover, it is history that reminds man of the consequences of his disobedience to the God of the Bible. “Current Events” fits the model better. The “look-say” method replaced phonics in reading instruction because it was more in line with Dewey’s non-authoritarian, child centered approach. Grades, with their anti-egalitarian implications, are sometimes done away with or inflated into oblivion. God, of course, is dismissed from the academy, replaced by the Theory of Evolution in the science classroom. With Him have vanished all vestiges of biblical morality and redemption. Although Dewey professed to be preparing his student’s for the “full-life”, his utilitarian emphasis led inevitably to a focus on career preparation. The older tradition had left career preparation to specialized training after a secondary education that focused on stimulating the intellect. Ironically, abandoning the classical model for the career model has produced workers increasingly unfit for the job market.

Biblical analysis. The life and work of John Dewey epitomizes the spirit of the builders of the Tower of Babel. “And they said, Go to, let us build us a city and a tower, whose top may reach unto heaven; and let us make us a name, lest we be scattered abroad upon the face of the whole earth” (Gen 11:4). As a result “…the Lord scattered them abroad from thence upon the face of all the earth: and they left off to build the city” (Gen. 11:8). As the theories of John Dewey have worked themselves out over the course of the 20th Century, their utter failure is becoming more and more obvious to the discerning observer. Never has an experiment in education cost so much and delivered so little. In constant dollars educational spending in the United States had climbed from about $500 per pupil per annum in 1920 to over $7,000 per pupil in 1996. During this same period educational performance has plummeted (4).

Corrective or Prescriptive Actions: The only solution being proffered by the educational establishment is a request for more funding. The folly of this situation will eventually be evident to all, and God will judge this latest attempt by humanistic man to run the world apart from Himself. Voters must reject every such request. Education, per se, is a false Messiah and must be rejected as such, especially when controlled by the state.