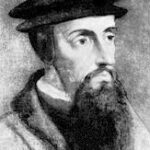 Calvin built on the work of Luther to extend the work of the Reformation into the rest of Northern Europe. His Institutes of the Christian Religion opened the Bible to the common man. Christian leaders from all over Europe studied under Calvin at Geneva. Then they carried his teach- ing back to their homes with dramatic results. The most notable example was John Knox, whose preaching transformed Scotland.

Who was John Calvin? John Calvin (1509-1564) is best known for explaining Reformation doctrine in the Institutes of the Christian Religion (1536) and his Commentaries.  The latter covers most of the Bible except for Revelation.  Forced out of his native France, Calvin was installed as pastor in Geneva in 1536.  During a short stop in Geneva on the way to Strausbourg, Calvin met Guillaume Farel.  After stiff resistance, he was compelled to join the Reform movement in Geneva.  Farel had begun the reform in Geneva, but felt unequal to the task of completing the work. He and Calvin argued long into the night with Calvin resisting every appeal.  He pleaded youth and the need for more study. At last the older preacher raised himself in his chair, and pointed an accusing finger in Calvin’s face.  He fixed him with a glare, and thundered, “May God curse your studies if now in her time of need you refuse to lend your aid to His church.”  With that Calvin’s resistance melted and he agreed to stay in Geneva. There he had a profound impact on both church and state.  The power of his teaching and the written Constitution he prepared transformed Geneva.

Historical context. Luther’s reform spread rapidly across Northern Europe.  These were lands where the influence of Rome was somewhat marginal: Germany, Scandinavia, Holland, Switzerland, and England. The war of ideas soon  turned violent in France.  This was a country caught in the crossfire between the two unyielding factions. Calvin addressed his Institutes to Francis I, the King of France.  He urged tolerance for his loyal subjects, the Reformed Huguenots.  Unfortunately, the lascivious king was distracted by matters other than just government.

Summary of Calvin’s teaching. Luther and Calvin never met, but Calvin systematized Luther’s teaching.  Not only salvation by faith in the atoning work of Christ alone, but many other Bible doctrines.  With Luther he returned to the Augustinian doctrine of God’s predestination in salvation.  However, Calvin rejected Luther’s view that the host was turned into the Lord’s literal flesh during communion.  He  insisted on the figurative meaning. But he shared Luther’s love of hymn writing.  At times he adapted well-known tavern tunes to the lyrics of faith.

Calvin’s views on civil government evolved with each edition of the Institutes.  This was especially true of his  doctrine of resistance.  He ended with a doctrine of interposition where the lower ruler  is granted power to lead the people against a tyrant king. The people as a

body have no such power.  They must endure injustice  while pleading with God to raise up a deliverer.  But, the people must resist passively when a tyrant asks us to disobey a command of God. Calvin’s views on civil government came in part from his contacts with the radical Anabaptists.  He held them to be confused regarding the doctrine of creation. They believed the old creation to be totally spoiled by the Fall, said Calvin.  This led them to extremes of 1) Pacifism, and 2) revolutionary rejection of civil rule.  They tended toward a socialistic community of goods and rejected the baptism of covenant children.  They also looked to the guidance of an “inner light.”  For these reasons they were opposed by the reformers and Roman Catholics alike (14).

“For the statement of some,” Calvin said, “that the law of God given through Moses is dishonored when it is abrogated and new laws preferred to it, is utterly vain.”  Instead we must conclude that Calvin at this point is utterly vain in choosing the law of man over the Law of God. His early legal training  appears to have blurred Calvin’s vision for the civil ruler.  Here he lays a basis for future generations to replace the law of God with natural law.  But the Fall has left man unable to derive propositional truth from the revelation of God in nature.  Instead, nature confirms man’s built in knowledge of God’s existence (Ps. 19:  1-4).  Calvin has been berated for burning of the heretic, Servitus, who denied the deity of Christ. However, Calvin was not a member of the city council that condemned Servitus.  He did, in fact, ask for a milder form of execution.

Implications for subsequent history. Calvin marked a rebirth of Augustinianism in the West.   Biblical liberty flourished in all realms of human enterprise. This included a burst of progress in science, commerce, and the arts. However, fatal flaws in the Reformers’ thinking  have served to disable the work in progress.  For instance, Calvin’s disciples in France and Scotland moved gradually away from his stand on the source of civil authority in God alone.  The next step was to divorce the doctrine from its biblical moorings with a system of natural rights.  The supposed natural liberty of man is stressed above the glory of God as the purpose of government.

Biblical analysis.  We have noted Calvin’s unhappy dalliance with natural law.   Luther and Calvin also pushed for a system of required, state-funded schooling.  Thus, they left the door wide open for state intrusion back into the church. The church thereby gave up her vital teaching mission to the nations (Matt. 28:19, 20).  The folly of this was not fully seen until the 20th century. By the same stroke, giving up education to the state suppressed families.  The family is given the task of  the education of children at Ephesians 6:4 and elsewhere.

Corrective or prescriptive actions.  Luther and Calvin did yeoman’s work in recovering the “lost” doctrines of “solo gratia”, “solo fide”, “solo Christo” (grace alone, faith alone, Christ alone).  It must be continually revived.      Their tragic straying from orthodoxy in education and law must be corrected.