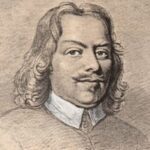 After the Bible, Pilgrim’s Progress is the best-selling Christian book of all time. It is an allegory of the Christian life written by John Bunyan from a jail cell. Bunyan’s hero, Christian, flees the City of Destruction to become a pilgrim traveling to the Celestial City. He survives a false start up Mt. Sinai and enters the Wicker Gate of Salvation. Christian evades all obstacles, but does nothing to subdue the world for Christ.

Who was John Bunyan? John Bunyan (1628-1688) was an English preacher and author.  He was made famous by his authorship of The Pilgrim’s Progress. Few of the great authors in history had the luxury of devoting full time to their writing. But sometimes that luxury is forced upon them without warning. In the case of John Bunyan the opportunity came as the result of his being jailed.  He had refused to take a license to preach after the restoration of Charles II.  Bunyan’s wife pled his case before the House of Lords, but in vain. “Will your husband leave preaching?” asked the judge, “If he will do so, then send for him.” To which she replied, “My Lord, he dares not leave preaching so long as he can speak.” Bunyan himself had declared, “I have determined, the Almighty God being my help and shield, yet to suffer, and if frail life shall continue so long, even till the moss shall grow on mine eyebrows, rather than violate my faith and principles.” Near the end of twelve years in the Bedford County jail, John Bunyan wrote Pilgrim’s Progress.   After the Bible, it is the most widely read Christian book ever published.  Later, in an apology for his book, Bunyan recalled how Some said, “John, print it”; / others said, “Not so.” / Some said, “It might do good”; / others said, “No.”

Historical context. Oliver Cromwell’s son Richard ruled England ineptly for less than a year after his father’s death.  He was driven from the throne by Charles II. Bunyan penned Pilgrim’s Progress while in prison shortly after the Restoration of King Charles II.  He  spent 12 years unjustly locked up in the Bedford County jail.  He was arrested on November 12, 1660 under the Clarendon Code.  This was a series of severe laws to silence clergy dissenting from the state Church of England. The severity of these laws was sometimes eased by the local Constables.  But, they remained an arbitrary imposition until the Declaration of Indulgence in 1672.  This was issued by Charles as a matter of political expediency.

Summary of Bunyan’s teaching. The Pilgrim’s journey begins when he leaves the City of Destruction at the advice of Evangelist.  He sets his face toward the Celestial City. Almost at once he and his partner, Mr. Pliable, fall into the Slough of Despond.  Christian makes the far side, but his companion returns to the City of Destruction. Christian learns that he cannot go on without passing through the Wicker Gate.  But first, he is tempted by Mr. Legality to take another route to the City. A path up Mt. Sinai ascends gradually at first.  In the end it is so steep that he is worn out and near death.

Evangelist appears again to direct his steps back to the Wicker Gate. There he meets Interpreter, who directs him into the narrow way called Salvation.  There he comes at once to a cross. The heavy burden rolls off his back and into an open tomb.  He goes on his way rejoicing.

On his way to the Celestial City Christian meets many obstacles and detours.  These include Giant Despair, the City of Vanity Fair, and Apollyon. Christian prevails over all aided by his Scroll, Comforter and his friends Faithful and Hopeful. At length he comes to a final river keeping him from the Celestial City.  Upon diligent search he can find no bridge.  Deciding at length to wade across, the water comes up to his chin.  Thoughts of his sins almost overwhelm him.  But he takes heart from his friends and the words of his Scroll.  His feet again find bottom and he crosses over into the Celestial City.

Implications for subsequent history.  Next to the Bible Pilgrim’s Progress has been the best selling book in English history.  It has been translated into over 70 tongues and affectionately called “the lay Bible.” However, it may have added to a shift toward pietism in Christianity.

Biblical analysis. The appeal of Pilgrim’s Progress lies in its faithful rendition of the ups and downs of the spiritual life using allegory. The Bible, of course, describes the Christian life as a pilgrim at war with the world.  This is seen in Hebrews 11:13 and I Peter 2:11 – “Dearly beloved, I beseech you as strangers and pilgrims, abstain from fleshly lusts, which war against the soul.”

Thus, some have faulted Pilgrim’s Progress for its pietistic overtones.  This is said to reflect Bunyan’s retreat from the world after the Puritan Revolution failed. Bunyan himself had served as a Parliamentary soldier.  But, Christian deserts even his family for the Heavenly City.

This may be true, but the book remains a classic allegory of the Christian life.  Bunyan rejects the law as a means of salvation.  But, there remain many lawful uses of the law of God, as explained in I Timothy 1:8-11.

Corrective or prescriptive actions. Bunyan describes many trials and temptations of Christian and the succor he found for each.  These are worthy of our careful contemplation as we progress in our earthly journey.  Bear in mind, however, that Bunyan is portraying a separatist view of the Christian life.  It does not boldly assert the claims of Christ over a redeemed universe. For Bunyan’s Christian, “This world is not my home, I’m just a passin’ through.” The separatist approach to Christianity must be rejected.