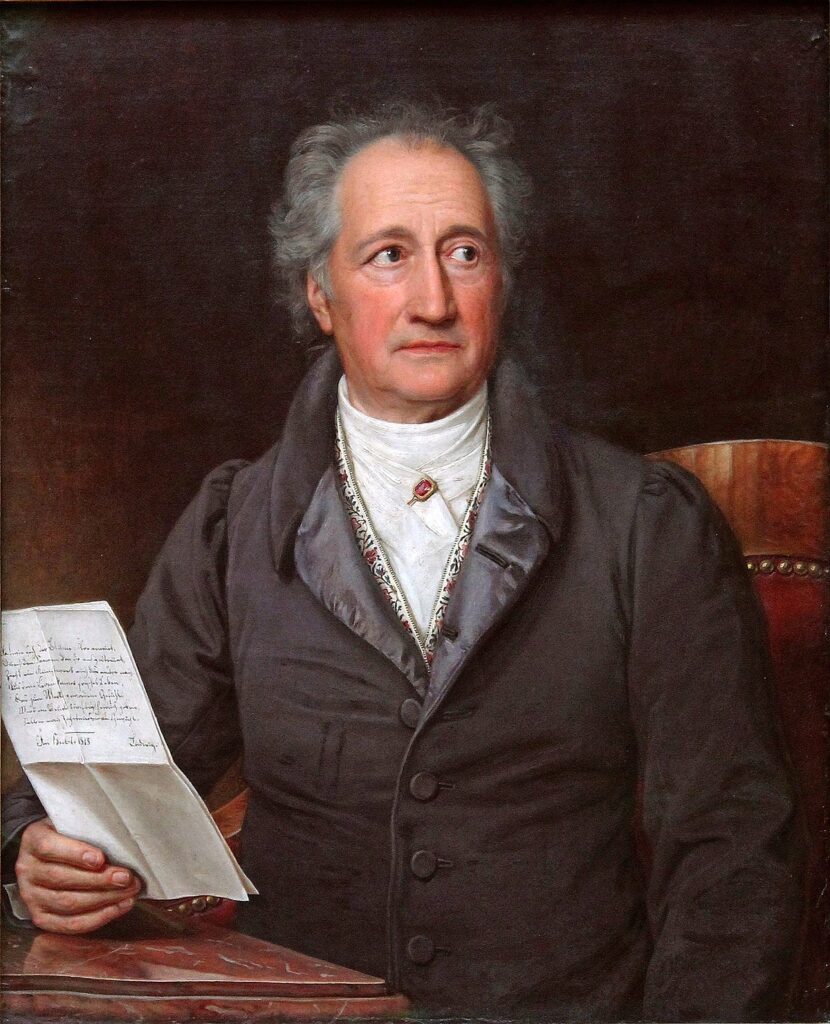 Johann Goethe introduced an incipient *pantheism to Germany and the western world as a reaction to the rationalism of the *Enlightenment.  Dissatisfied with the transcendent, *impersonal god of Newton and the Deists, the *Romantic movement sought for communion with god in the beauty of nature.  This god was immanent, enshrined in the very soul of his creation.  Truth is *beauty and beauty is truth.  Emotion reigns supreme.  Man’s spiritual quest was to become one with nature and thus with god and thus to become god.  Man is thus the definer of ultimate truth, as he discerns it in the laws of nature and nature’s god.   This “Faustian *Quest” was embodied in Goethe’s version of *Faust, the ancient legend in which a man foolishly trades his immortal soul for temporary material gain.  Goethe mutilated the legend by portraying human striving and *effort as the key to *redemption and defeat of the Devil.   In the Biblical view, God is intimately involved but separate from His creation.  He became man to give His life in the Person of *Christ and bear the burden of man’s sin and futile striving.

Who was Johann Goethe? (1749-1832) Johann Goethe was a German novelist, dramatist, poet, and scientist wielding an influence in German literature similar to that of Shakespeare in England. He was influenced in his youth by occult philosophy, astrology, alchemy and Lutheran pietistic mysticism, which found expression in his later work.

Historical context. In 1687 Isaac Newton revolutionized science with the publication of Principia Mathematica. Inadvertently, Newton’s learned description of the laws of physics and mathematics tended to promote a mechanistic and naturalistic view of the universe. Rationalism, Deism and ultimately materialism were the natural consequence in the next century. Confidence that man starting with his unaided reason apart from a personal God could arrive at truth was at an all-time high in the Age of Reason. This led of course, to the famous clock-maker illustration of Deism in which God is said to have created the universe as if winding a clock and then stepped back and let it run on its own. Goethe and others such as his friend Schiller and Lessing at first embraced this Enlightenment perspective, but then rejected its transcendent and impersonal God for a god of their own making much closer at hand. Following Rousseau, their’s was a vaguely pantheistic god experienced immediately and emotionally as men commune with nature and their environment. As Schiller put it, “All creatures drink in joy from nature’s breasts”

Summary of Goethe’s teaching. Goethe’s belief that man as an individual can arrive at his own version of truth in communion with the god of nature finds its best expression in Faust. This was a dramatic poem composed over a period of some 60 years. The “ Faust ” legend in which a man sells his soul to the Devil for temporary material gain is an ancient one, originating in Simon the magician (Acts 8) . In the middle-ages it attached itself to magician Georg Faust, who was found strangled unnaturally in the dark of night near Wurttemberg about the year 1541, as if by the Devil.

Goethe presumptuously modified the legend to make Faust the winner and the Devil (Mephistopheles) the loser, thus exalting the independence of man in his quest for autonomy and self-sufficiency. The three phases of the poem reflect three stages in Goethe’s life, emotional turmoil, intellectual and cultural development, and finally, practical concern for society. These were expressed through the Gretchen tragedy, union with the Greek Helena in the underworld, and the seashore colonization. God is seen in the prologue blessing all of Faust ’s future activity, no matter how far afield it may carry him. The theme phrase is found at the beginning and end of the poem: “Whoever strives and strives again, him we can redeem.” Elsewhere, Goethe said, “Knowing is not enough; we must apply. Understanding is not enough; we must do. Knowing and understanding in action make for honor.” The interchange with the Devil is transformed into a wager that Faust will not deviate from his ideals on pain of being condemned to Hell. In the end, God and Faust are pictured in heaven the winners and the Devil the loser.

Implications for subsequent history. Underground forces of Pantheism agitated for the French Revolution via the Jacobin Clubs (1). Viewing the humiliation of the French monarchy from Weimar, Goethe shuddered, perhaps unaware of the sinister influence of his own philosophy. Pantheism ignited the French Revolution, then jumped the Atlantic and came to full flower in the 19th Century Age of Romanticism. This movement, known as Transcendentalism in the United States, united man to God, leaving man the transcendent authority. Its guiding lights included Emerson, Thoreau, and Whitman.

Goethe’s philosophy found musical expression in the composition of Beethoven (1770-1827). The deification of nature gave impetus to the natural law school of jurisprudence, in which propositional truth or law is supposedly discernable in nature (2) . William Blackstone composed his Commentaries on the Laws of England (1765) under the sway of this philosophy. Fallen nature, however, is an unreliable source of propositional truth (Rom. 8:19-23) and since 1859 the theory of Evolution has destroyed the assumption of fixed natural laws in the popular mind.

In addition to its naturalistic or atheistic tendencies, Goethe’s vague pantheism opened the door for the entry of eastern spiritualism into the West. Being part of nature and thus deity, men are encouraged to recognize their innate divinity, which is developing cyclically through the metaphysical principles of Karma and reincarnation.

The destructive torrent of modern environmentalism also rises in the headwaters of Goethe’s romantic pantheism. Any use of material resources by man is viewed darkly as exploitation and desecration of the god of nature – or rather the goddess, Mother Nature. In the United States this has become a multi-headed hydra, seemingly impossible to root out. It is in the process of destroying the logging, mining, fishing and farming industries by means of oppressive state regulation and outright ownership of land. In the state of Oregon, for example, most farmers have been effectively denied the right to build a home on their own property unless they can demonstrate an unreasonably high level of income from the land.

Biblical analysis. Goethe’s philosophy contains so many dangerous tentacles it is difficult to know which one to lop off first. At the head of the matter is his pantheism, the belief that God is one with the forces of nature. The Bible presents God as personally and intimately involved with His creation, yet distinct from it. “If I make my bed in Sheol,” said the Psalmist, “Thou art there” (Ps. 139:8). It should be obvious from Genesis 1 that God existed prior to and thus separate from nature before He summoned the universe into existence. This clearly excludes the Pantheist “chain of being”, which hearkens back to the Greek conception of the gods as merely exalted men.

This ancient religious impulse was actually seen earlier in Phoenician Baalism, “the belief that all being was one being , and that god therefore was an ascended man on that scale of being” (3). “Baal” means “lord” or “king”, who represented absolute authority over other men as the representative of god on earth. Baalism was therefore a political religion; even as modern environmentalism has assumed a political form. As such, it rivals the worship of Jehovah. This is God created in the image of man. Elijah successfully challenged it in its Phoenician stronghold at Mt. Carmel.

Man’s quest for autonomy lies at the heart of his fall, not the way of salvation as presented by Faust. Bing Crosby’s “I Did It My Way” might well serve as Faust’s theme song. “There is a way that seemeth right unto a man, but the end thereof are the ways of death” ( Pr. 14:12).

Corrective or Prescriptive Actions: Christians must recognize the pantheistic roots of natural law political philosophy and the fact that it was neutralized over a century ago by Darwin’s concept of an ever-changing and evolving nature. Biblical law is the only Divine alternative in the socio-political sphere. For the individual submission to the gospel is the only alternative to Faust ’s autonomous philosophy of “works salvation”. Man implicitly accepts a “Faustian Bargain” when he refuses the work of Christ on the cross for his salvation.