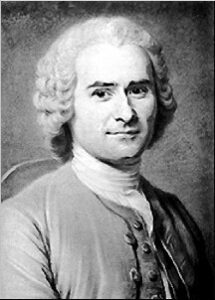 Jean Jacques Rousseau is known as the philosopher of the French Revolution. He believed man was innocent and free in the state of nature, but now “everywhere he is in chains.” Various institutions — church, state, family, etc. – have corrupted man and must be over thrown. A new social contract and state based on the Democratic majority must be reinstalled on the ruins of Christian civilization.

Who was Jean Jacque Rousseau? (1712-1778) Jean Jacques Rousseau was born of French Protestant lineage in Geneva.  Given no parental training, he wandered for many years a vagabond.  At last he settled in Paris and gained notoriety after winning an essay contest.

Historical context. The French Revolution was preceded by a period of social and economic unrest.  This was made worse by the weak fiscal policy of King Louis XVI.  There was also a large debt for aid to the American Revolution. The men of the Revolution justified their violent actions by the teaching of Rousseau.  Thus, he is called “the philosopher of the French Revolution.”  It was provoked by the rather cavalier attitude of the nobility toward the suffering people.  The king’s wife, Marie Antoinette, had said “Let them eat cake.”  Although the French had helped the American Revolution they did not make it a pattern for their own.  In America the leaders interposed between the people and a tyrant king.  By contrast, the French attacked leaders and king alike.  It was a coup d’état (illegal seizure of power) against all established authority.

Summary of Rousseau’s teaching. Rousseau denied the Fall.  He held that man in his natural state – a state of nature – is innocent and undefiled.  Rousseau lionized the “noble savage”, free from the rules and conventions of civilization.  It is only the corrupting effect of society, that has polluted and made man a slave.  Christian society is the culprit.

He will at last be free of its stifling moral strictures.  This is the faith of the ancient chaos cults. The authority for the civil compact rests in the “General Will” of the whole people.  The Word of God is ignored.

This naïve view of human nature led to Rousseau’s utopian views on education in Emile (1762).  If the child is by nature innocent and good, we have only to create a setting  that will permit self-expression.  In such a context the flower of all that is good in human nature will blossom. This method has been preserved in the modern Montessori school movement.

Implications for subsequent history. The Social Contract (1762) inspired the violent purging of French society.  This was the work of  Robespierre during the Reign of Terror in 1793.  Clergy and nobility alike were found guilty by association with the corrupting institutions of society.  They were swept away in the Reign of Terror, carted to the guillotine after cursory hearings. Ironically, this instrument of death got its name from the physician (healer) who invented it.  When the Terror finally consumed itself, Robespierre himself was dead.  The dictator, Napoleon Bonaparte, intervened to restore order.

Rousseau contributed to the modern theory of environmental determinism.  The problem with man lies not in the heart, but rather in the environment.  Revolution is justified because civilization and all its structures is guilty, not man. Thus, men turn away from the church and her call for repentance, to the raw power of the state.   They opt for the state to effect forms of social engineering, not least of which are the public schools. This is a flight from reality and responsibility.  It tends only to tyranny in the state and degeneracy in the citizen.

Biblical analysis.  Rousseau’s “noble savage” theory cannot be found in the Bible.  Instead, the Bible teaches that man is fallen and totally depraved.  That means that  every aspect of his being – mind, emotion and will – has been corrupted.  It is only the restraining influence of the Spirit of God that keeps man’s evil nature in check. “Can the Ethiopian change his skin, or the leopard his spots?” asks the prophet, “then may ye also do good, that are accustomed to do evil?” (Jer. 13:23).   Jesus likewise, “For out of the heart proceed evil thoughts, murders, adulteries, fornications, thefts, false witness, blasphemies: These are the things which defile a man….” (Matt. 15:19,20).  Rousseau was remiss in his family duties, yet a hero to the nation.

Corrective or Prescriptive Actions: Thus, the renovation of man and society has to be an “inside job.”  It must be a change of heart and mind that only the new birth can create (II Cor. 5:17).  As men and women enter into covenant with their Creator they are cleansed within.

The natural progression is outward to society. Reborn individuals will come together, not in a social contract, but in a national covenant with God, to live in community under His law.