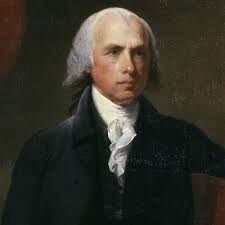 James Madison is Known as the “father of the *Constitution”, James Madison did more to break the *national covenant with God than any other man.  Madison organized the Constitutional Convention and served as secretary, using this position to lead the debate.  *Structurally, the Constitution contains a number of features that may be found in the Bible: Republican form, division of powers, *federalism, etc.  *Spiritually, however it departs radically from earlier colonial documents, many of which were very forthright *covenants with God.  There is, in fact, no mention of God in the constitution and “we the *people” are cited as the establishing *authority, rather than God.  Even worse, the Constitution forbids any requirement of a religious test *oath, by which an officeholder would swear to govern in accordance with the law of God.   Madison saw Christianity as a source of civil *faction and thus sought to expunge its authority in civil government by creating a *secular republic.

Who was James Madison? (1751-1836) James Madison was the fourth U.S. President and “father of the Constitution”. He drafted the “Bill of Rights” and served also as a Congressman and Secretary of State.

Historical context. America declared her independence from Great Britain in 1776, embarking on a five-year war that ended with the surrender of General Cornwallis at Yorktown in 1781. The turning point came with the battles of Saratoga in 1777 when a British pincher movement up and down the Hudson failed to cut off New England from the rest of the colonies.

The United States were governed under the Articles of Confederation after the war, and struggled in the absence of a strong executive and no taxing power. It was thus difficult for the new nation to pay its war debts. Whether or not things were as bad as the Federalists painted them after the war, a special convention was convened in 1787 for the specific purpose of amending the Articles of Confederation. However, it was evident from the start that a small group from the Virginia aristocracy headed by James Madison had organized the Convention with the intent of scrapping the Articles. This was apparently a secret decision that had been made contrary to law at the Mt. Vernon Conference in 1785 and the subsequent Annapolis Convention in 1786. Article XIII specified that “the Articles of this confederation shall be inviolably observed by every state, and the union shall be perpetual; nor shall any alteration at any time hereafter be made in any of them; unless such alteration be agreed to in a congress of the united states, and be afterwards confirmed by the legislatures of every state.” Madison and the Convention also made an illegal end run around strong opposition in the state legislatures by appealing to state ratifying conventions.

Summary of Madison’s teaching. James Madison served as official secretary at the Convention and his views of civil government were by and large adopted. He has thus come to be known as the “father of the Constitution.” Structurally, the Constitution incorporated some sound principles of civil government, which may be identified in the Bible. These include the checks and balances associated with division of power among three branches of government and the Republican form in which representatives of the people (House of Representatives) and of the states (Senate) make governing decisions. The original composition of the Senate secured a federal, or two-level system in which the states as political entities maintained control of the federal government. States’ rights were protected so long as the Senate was elected by the state legislatures, a feature that was overturned by the 17th Amendment in 1913.

However, a cursory reading of the Convention notes and the Federalist Papers reveals that these principles were not derived from Revelation, but rather from contemporaries such as Montesquieu and John Locke. These philosophers were writing from a natural law perspective, not specifically biblical. Scottish common sense rationalism was also a dominant influence as conveyed to many of the framers, including Madison, by Rev. John Witherspoon at the College of New Jersey.

Spiritually, the Constitution was a radical departure from earlier colonial governing documents. Although the framers rejected the form of direct Democracy, they embraced its source of authority in the majority opinion of “the people”. This found expression in the Preamble, where no reference is made to the governing authority of God. This is the base of authority characteristic of a humanistic democracy, rather than that of a Theocratic republic in which the governing authority of God is affirmed.

For example, Delaware’s constitution required this oath of officeholders: “I, A B, do profess faith in God the Father, and in Jesus Christ His only Son, and in the Holy Ghost, one God, blessed for evermore; and I do acknowledge the holy scriptures of the Old and New Testament to be given by divine inspiration.” Madison was at war with these religious test oaths because he saw them as a source of faction. “The latent causes of faction are thus sown in the nature of man,” said Madison, “a zeal for different opinions concerning religion, concerning government and man…we well know that neither moral nor religious motives can be relied on as an adequate control [for faction]” (Federalist #10). This led him to adopt a secularized, Lockean social contract in which the authority of “we the people” has been substituted for the authority of God and His law. He viewed the multiplication of countervailing factions as the only effective solution to social strife. “Ambition must be made to counteract ambition,” he said in Federalist #51.

Implications for subsequent history. Thus, Madison laid the groundwork for a pluralistic society, in which no particular moral or religious framework prevails. “Factions”, or parties, began to appear almost immediately, but they failed to produce their salubrious effect. On the contrary, they were a natural consequence of the new nation’s rejection of the governing authority of God. A sharp schism developed between Madison and Hamilton, who had collaborated on the Federalist Papers during the ratification debates. As Secretary of the Treasury under Washington, Hamilton pushed for the establishment of a national bank. Madison, serving as Secretary of State and seeking to maintain a strict construction of the Constitution resisted. Eventually Hamilton resigned to head the Federalist Party, while Madison teamed with Jefferson and the Republicans. Relations became so embittered that the Federalists under President John Adams passed the Alien & Sedition Acts (1798) in a thinly veiled attempt to suppress the Republican’s freedom to dissent. The scheme created a backlash which led to the election of Jefferson in 1800.

Madison himself became President after Jefferson’s two terms and presided over the War of 1812. This War, triggered by the kidnapping and impressment of some 6,000 American sailors into the British Navy, was eventually won by the heroics of Andrew Jackson in Louisiana. Madison was not a strong President, but he generally tried to limit activity of the Federal government to powers specified in the Constitution.

However, his understanding of church-state relations was confused. He rightly resisted the efforts of Virginia Governor Patrick Henry to fund the salaries of Protestant school teachers in his Memorial & Remonstrance of 1785. Moreover, he opposed state established (funded) churches. However, he went too far in divorcing civil government from the authority of God in the Constitution. That legacy ensured the judgment of God on the nation he founded and his confusion has been multiplied in “his posterity” .

Biblical analysis. America followed in the footsteps of ancient Israel when they rejected the governing authority of God, as recorded in I Samuel 8. In that passage Samuel promised that the king they lusted after would take 10% of their produce, thus making them his slaves. In modern America – the land of the free – civil government at all levels takes between 40% and 50% of the gross national product.

The civil covenant and oath is found throughout the Bible, for example at Nehemiah 10:29: “They clave to their brethren, their nobles, and entered into a curse, and into an oath, to walk in God’s law, which was given by Moses the servant of God, and to observe and do all the commandments of the Lord our Lord, and his judgments and his statutes;” In adopting many features of a biblical civil government, while denying the rightful authority of God, the U.S. Constitution takes “The form of godliness, but denying the power thereof” (II Tim. 3:5)

Corrective or Prescriptive Actions:  Had James Madison and the framers of the U.S. Constitution been using the Bible as their “great political textbook”, they would have said something like this, in keeping with the pattern of the Mayflower Compact, the Massachusetts Body of Liberties and the several state constitutions:

PREAMBLE: “We the people of the United States, humbly acknowledging Almighty God as the source of all authority and power in civil government, the Lord Jesus Christ as the Governor among the nations, and His revealed law as of supreme authority, in order to constitute a Christian government , to form a more perfect union…do ordain and establish this Constitution for the United States of America.”  (1)

ARTICLE VI, CLAUSE 3: “The Senators and Representatives before mentioned, and the Members of the several State Legislatures, and all the executive and judicial Officers, both of the United States and of the several States, shall be bound by Oath or Affirmation, to support this Constitution, and a Trinitarian religious Test oath shall be required as a Qualification to any Office or public Trust under the United States.”