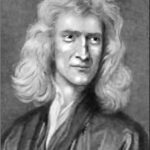 Isaac Newton summed up laws of physics, motion, and gravity in his famous Principia Mathematica. He was said to discover gravity when an apple fell on his head as he dozed under an apple tree. Unbelievers began to reason that if the universe runs by mechanistic laws, God must have withdrawn after setting it all in motion. This left men like the American founders free to improvise in other areas like political theory.

Who was Isaac Newton? Isaac Newton (1642-1727) was the son of an English farmer, who grew up to be an innovative mathematician and scientist. He was President of the Cambridge Royal Society for 25 years. In spite of his great achievements, Newton had a humble, non-assuming way about him.  In fact, he was somewhat uncomfortable in a group of people.  As Cambridge University’s representative to Parliament (1689) he never rose to speak.  Finally one day he stood and the assembly fell strangely silent.  Every ear was cocked in rapt attention for whatever wisdom might fall from the great man’s lips. There is an open window creating an uncomfortable draft, Newton awkwardly exclaimed, and I wonder if we might have it closed. With that he sat down. And in a statement said to have been made on his death bed he put his work  in perspective, “I do not know what I may appear to the world; but to myself I seem to have been only like a boy playing on the seashore, and diverting myself in now and then finding a smoother pebble or a prettier shell than ordinary, whilst the great ocean of truth lay all undiscovered before me.”

Historical context. Newton began his work under the later Stuart kings. He lived through the Glorious Revolution of 1688. Censorship made this a static period politically, compared with the Whig agitation common to Cromwell’s Interregnum.  But, science was  greatly  esteemed.  Newton was a leading figure in  the Royal Society.  It was modeled after Bacon’s New Atlantis, a book about a scientific elite above the government.

Summary of Newton’s teaching. Newton’s magnum opus, Principia Mathematica (1687), systematized the laws of gravity, motion, and Calculus.  It produced a revolution in both science and philosophy.  Newton never defined gravity.  But, he was the first to describe its operations in scientific laws that unified physics. This outlook reigned until Darwin’s theory of evolution overturned belief in fixed natural laws. Newton’s Opticks described his research on the nature of light and color.

Implications for subsequent history. Because of his religious statements, Newton is known as an orthodox Christian.  However, he was also an Alchemist in search of the “Philosopher’s Stone.”  This mythical substance was supposed to give long life and enlightenment.  It was also alleged to turn base metals into gold.   The Alchemist seeks a miracle change through endless repetition of his pseudoscientific recipes.  These will transform not only  the elements, but also himself as the model man (32). Moreover, he had an Arian (Unitarian) and Deistic view of God. This did not prevent Bible study and a form of piety in his personal life.  His laying out a set of scientific, natural laws had the long-term effect of very subtly nudging God out of the universe.  Men of the 17th Century reasoned that  mechanistic, scientific law governs the material universe.  Thus, God must have retired into the background after first setting everything in motion. Reaction against Newton’s transcendent, aloof god  led to pantheistic romanticism in the 19th Century. In this movement God was imminent and in everything.

Even Christians were not immune from Newtonian thinking. For instance, the Puritan leaders of New England “accepted knowledge as an ally…The ministers and other educated men sent to England for the latest works of Newton, Halley, Kepler, Boyle…sought to use the new light which they shed on the wonders of God’s world to buttress Christian faith” (33).

Newton was not a political philosopher,  per se.  But, his work had a profound effect on political thinking in the American colonies. He provided a natural law/rights basis for agreement among Calvinists and Unitarians.  This left a big mark on the American Constitution, which made no appeal to God’s law.  The early stages of this process seemed harmless.  For instance, the great legal analyst, William Blackstone, equates natural law and Bible law in his Commentaries.  Blackstone said, “Upon these two foundations, the law of nature and the law of Revelation, depend all human laws….” However, natural law is here assigned a place that it does not deserve.  The next stage is almost always to dispense with Scripture.  Natural law theory places the ability of fallen man to interpret fallen nature on a par with the Bible.  This is a big problem.

Biblical analysis. “The heavens declare the glory of God and the firmament sheweth His handiwork” (Ps. 19:1).  The works of God reveal His glory.   But, their true meaning can only be unlocked by the key of His Word. We must never reverse this order by giving first place to so-called natural law. The end of Psalm 19 goes on to extol the Word of God as the source of true wisdom for men and nations. It is the fear of God rather than our grasp on the works of God that is “the beginning of wisdom” (Prov. 1:7).

The Bible teaches the immanence and the transcendence of God.  On one hand the Creator is totally distinct from His creation (Isa. 57:15). On the other hand, God is everywhere (Ps. 139) and actively involved with His creation. Thus, we enjoy a sharing of life with God through Christ, but not a sharing of being.  Providence teaches that God personally governs all His creatures and all their actions. This government extends even into the political realm.  There God shall “strike through kings” “until I make Thine enemies Thy footstool” (Ps. 110).

Corrective or prescriptive actions.  All this suggests that we can enjoy God’s creation and are free to use the tools of science.  But, we must guard against “worshipping the creature rather than the Creator” (Rom. 1: 25). Such is Scientism, not true science.  God controls everything that happens and requires men and nations to submit to His government.