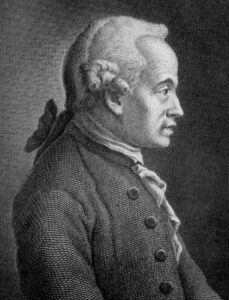 Immanuel Kant wrote to counter Hume’s philosophy of skepticism and despair. First, he insisted man must “humbly” accept that he cannot know the noumenal realm of God and spirituality. This erased man’s responsibility to God. Second, he identified categories in the mind by which man orders and actually creates reality. Thus, man replaces God. After Kant, a wave of subjectivity swept nearly every discipline.

Who was Immanuel Kant?  Immanuel Kant (1724-1804) was a German philosopher and professor at the University of Konigsberg.  Kant authored numerous works of philosophy.  The most influential of these is Critique of Pure Reason (1781).  Although he rarely left  Konigsberg, his thinking has conquered the modern world.  Kant’s writings are some of the most tedious in the field of philosophy.  His choice of words is so obscure at some points that one is tempted to ask, “How did he ever talk with his wife?”   The answer is that he never got married.  But every so often a ray of light shines through. An 1802 entry in Kant’s diary reveals he had a guilty conscience for firing Mr. Lampe.  Lampe had been his faithful servant of many years.  Unable to banish the Lampe issue from his mind, Kant made the following entry.  “Remember,” he wrote, “from now on the name of Lampe must be completely forgotten.”  In a more serious vein, Kant summed up his system of morality as “…not properly the doctrine of how we may make ourselves happy, but how we may make ourselves worthy of happiness.” (49). Thus, reduced to its basics, Kant’s hope of salvation rested in a system of works righteousness.

Historical context. Kant’s Magnum Opus, Critique of Pure Reason, appeared in 1781.  The American Revolution was just then winding down.  Kantian idealism flourished in Europe in the turmoil after the Napoleonic Wars.  In the first decade of the 19th Century Revivalism and Unitarianism were both reshaping the American religious psyche.  Napoleon sold Louisiana to President Jefferson for pennies on the dollar.

Summary of Kant’s teaching. Kant wanted to rescue epistemology from Hume’s philosophy of despair.  Hume had allegedly disproved the reality of the material and the immaterial realms.  This left nothing but the mind.  Kant assigned universal forms or categories to the mind.   Through these it perceives and assigns order and meaning to nature.  Kant stated that  man must “humbly” admit that his mind has no access to the noumenal realm.  That is the realm of God, spirituality and “things in themselves.” Man must limit himself to the phenomenal realm of sense data.  Its laws, in effect, owe their being and meaning to the mind of man.  “The understanding does not derive its laws (a priori) from, but prescribes them to nature,” wrote Kant (50). Thus, in a few deft moves, Kant ushered God out of the universe and enthroned the autonomous mind of man in His place.

Implications for subsequent history. Almost all disciplines have become more and more irrational since Kant.  For instance, many quantum physicists believe that the act of measurement itself creates the reality of nature.   Neo-orthodox theologians teach that the voice of God is heard by each person subjectively in the Bible.  After Kant, Hegel taught that truth itself evolves.   This happens as thesis and  antithesis collide to yield a new, but fleeting synthesis.  Karl Marx applied this idea to economics and social theory to get the theory of ongoing class warfare. Even the “man on the street” now believes that truth is a matter of one’s own opinion.  He thus rejects the authority of God’s Word.

Hume and Kant both seemed to defy common sense.  Thus, the early reaction against them was known – not surprisingly — as “Common-Sense Rationalism.” Sadly, this conservative recoil (in Scotland) was not based squarely on the Bible.

The outcome of this failure was acute in the fledgling American colonies.  There Scottish Rationalism was embraced by many of the founding fathers.  It came via  John Witherspoon at the College of New Jersey.

Biblical analysis. History and nature are endowed with meaning by the mind and Revelation of God, not the mind of man. Only Christians can accurately interpret history and creation because they have been given God’s perspective.  “For who hath known the mind of the Lord, that he may instruct him? But we have the mind of Christ” (I Cor. 2:16).  Moreover, God created and gave structure to nature during the first 5 days of creation.  This was prior to the creation of the mind of man on the 6th day.

“Kant tried to rescue a role for sensation by positing forms of the mind, innate or a priori, by which sense data could be organized. But, and this is the difficulty, if sensory data can be known only as organized, one cannot know what is the nature of things-in-themselves before they have been altered by the forms of the mind. Thus Kant’s philosophy faced the paradox of confidently asserting the existence of something unknowable” (51).

Corrective or Prescriptive Actions: This basic  irrationality should be pointed out to the unbeliever “lest he be wise in his own eyes.”  Then we can direct him to his need to “be transformed by the renewing of your mind” (Rom. 12:2) in the light of God’s Word.