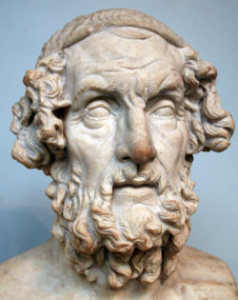 Homer wrote two epic poems.  The Illiad describes the Greek siege of ancient Troy  led by the champion, Achilles.  The combatants strive with heroic pride to achieve immortality.  By contrast, biblical heroes prevail by faith and humility.  In spite of Achilles prowess, the Greeks only won by the ruse of the Trojan Horse after a fake retreat.  The Odyssey relates the round-about return home of  Odysseus after the Trojan War

Who was Homer? Active about 850 B.C., nothing is known of Homer apart from the Iliad and Odyssey.  Both are epic poems that define the Greek world view and set the pattern for all later Greek literature. The epics are poetical fiction rooted to some extent in historic fact. Even though we don’t know a lot about Homer, we do know what a lot of his friends have said about him:

Homer and Hesiod attributed to the gods everything that is a shame and a reproach among men.” (Xenophanes, 570-475 B.C.)

Homer is new and fresh this morning, and nothing, perhaps, is as old and tired as today’s newspaper.” (Charles Peguy, 1873-1914)

Historical context. The Iliad speaks of events that  occurred years earlier.  These events related to the Greek war with Troy in Asia Minor. The Trojan War resulted from the vanity of 3 goddesses who entered into a beauty contest. Zeus refused to judge, deferring to the Trojan ruler, Paris. Paris was promised the Greek beauty Helen if he will decide for Aphrodite.  Helen is the world’s most beautiful woman, but the wife of Menelaus.  The couple elopes to Troy and the Greeks lay siege. The plot focuses on the wrath of the Greek champion Achilles.  He is provoked by the insult of Agamemnon, his comrade-in-arms,  to withdraw from battle.  Thus, Achilles left his fellows to suffer defeat until he returns.   Even then, it is only by  ruse of the Trojan Horse and a feigned retreat that the Greeks finally prevail.

The Odyssey depicts the Greek hero Odysseus.  His wife and property are overrun by a band of suitors because his return from the Trojan War is delayed. He finally returns home after a 10-year adventure.  Odysseus returns in disguise to a glorious reunion after executing revenge on the suitors. Homer wrote during the period of Israel’s degeneracy, reflecting the Jew’s failure to shine as a beacon to the nations (Deut. 4:6,7).

Summary of Homer’s teaching. Homer portrays a distorted view of God, man, salvation, and ethics.  Ethics is the science of moral behavior.  The Greek gods are created in the image of man: fickle, cruel, quarrelsome, and immoral. In this polytheistic view, quarreling and war is ensured “on earth as it is in heaven.”  Polytheism is the belief in many gods.  Nobody is ultimately in control.  Thus, the “fate” dispensed by the gods is random in its disbursing of blessing and cursing.  Far different is God’s loving sovereignty (5).  Fate is a power that fixes events without change, regardless of human action. By contrast, God in His sovereignty accounts for human moral action.

Suffering or self-denial — such as that of Odysseus — is endured only to inflict greater suffering on one’s enemies.  The suffering of Christ on behalf of others stands in bold relief.  In contrast with God’s free gift of eternal life, gifts in Greek society are used to attain personal and civic power. As with Odysseus, the bonds of marital fidelity may be broken at will.  Yet only the brutality and wiles of an Odysseus can restore  peace and order in society.

Implications for subsequent history. Greek autonomy has challenged the rule of God’s law in every age.  It makes man the measure of all things.  The “heroic” ideal has reaped a harvest of evil down to the present day. It infected medieval chivalry and the Coda Duella of the American South and West. Men were honor-bound to accept a challenge to fight to the death.  There was no regard for the restraints of Bible law. The “heroic” spirit has provoked and energized countless wars and political strife.

Biblical analysis. The Sixth Commandment requires us to preserve our life by defending it.  But we are commanded not to avenge ourselves due to wounded pride (Rom. 12:19). Homer’s heroes are concerned only with self-deification through feats of martial valor. In stark contrast are the Bible heroes listed in the “Hall of Faith” (Heb. 11).

In victory or “defeat” these saints looked to God in faith rather than to themselves.  They were concerned with His glory rather than their own. In contrast to Greek  “works-salvation”, is the Bible’s assertion that Christ alone can appease the wrath of God.

Corrective or prescriptive actions. “Greeks bearing gifts” seek to enhance their own political interests. Voters must reject the promises of politicians to supply all their needs.  Likewise, politicians must reject gifts (votes) proffered by voters in exchange for political favors.