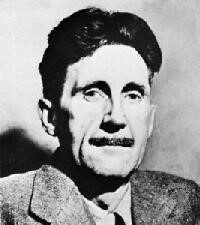 George Orwell’s 1984 is a terrifying description of the gathering storm clouds of Soviet Communism. Orwell paints the picture of a dreadful tyranny that monitors every word and action with omni-present video cameras. The watchword in Oceania is “Big Brother is Watching.” The protagonist, Winston, loathes his job rewriting history at the Ministry of Truth. He tries to live a double life, but is caught and punished.

Who was George Orwell?  George Orwell (1903-1949) was the pen name of an English author named Eric Blair.  He is best known for his “negative utopia”, 1984.  Mr. Orwell grew up in India and served for a time with the Indian Imperial Police in Burma.  He began writing his novels and essays after moving to Europe.  There he became a Socialist.  In spite of socialist leanings, Orwell hated socialism’s first cousin, Soviet Communism. The incongruity didn’t seem to register with him. His attitude toward the tyrant is summed up by the famous slogan, “Big Brother is watching you.”  He clearly did not think mankind could escape that all-knowing gaze. “All animals are equal,” he wryly observed in Animal Farm, “but some animals are more equal than others.” George Orwell seemed to have worked himself to death.  He died at the  age of only 47 from a neglected lung problem.

Historical context. For centuries, the moral fiber of the Russian people had decayed under the sway of a passive and pietistic Orthodox Church. Finally, in 1917 the Bolshevik Revolution set up a Communist police state.  This regime crushed Russia and posed a dire nuclear threat for most of the 20th Century.  George Orwell  hated the fawning manner in which the Western press papered over the Communist blood bath.  Intellectuals were quick to excuse the heavy hand of statism.  This was often  under the guise that a central economy was the most efficient.  As Babylon in the days of Habakkuk, the Soviet Empire proved to be a rod of discipline in the hand of God.  Animal Farm and 1984 were broadside attacks on both the hypocrisy and the brutality.

Summary of Orwell’s teaching. Orwell foretold a world in which the power of government to audit and control  is total.  Orwell’s futuristic world (Oceania) is controlled by technology.  Every move may be checked by a ubiquitous video device.  “Big Brother is Watching” is the ever-present byword by which men live.  Winston, the hero of the story, spends his work days revising history at  the “Ministry of Truth.”  There he dispatches unwanted facts down the “memory hole.” An obliging media leads the brainwashed masses in daily “hate rituals” against Big Brother’s enemies.

Implications for subsequent history.  1984 has come and gone, and certainly elements of Orwell’s vision are with us today.  The  regime that he pilloried broke down  under its own weight in 1991.  Yet centralization remains

the main feature of modern governments.  The computer,  rather than the video camera, arms bureaucrats with the power to control  the masses.  Textbooks are revised and a pliant media subtly filters and molds reality in terms of the state.

Such methods hearken back at least as far as the Roman Emperor Nero.  He found the formula of “bread and circuses” just as able to pacify the masses as his strong-arm tactics. Nero maintained a surface popularity by offering free corn from the imperial granaries.  He also provided free (though brutally degrading) sport in the arena.

Biblical analysis.  Someone has said that those who refuse to be ruled by God will be ruled by tyrants.  When men refuse to rule themselves by  God’s Word, God  applies the rod of discipline.  Discipline is not pleasant and in some cases may be very severe.  But,  it is often the means God uses to chastise and purify His people (Hab. 1:4-6). For social comment even bleaker than 1984, turn to Deuteronomy 28 in the Old Testament. There  judgment is laid out in all its horror as the price of rebellion from God.  It includes the big-three terrors of disease, famine, and war.  On top of that is endless wandering, slavery, ill treatment and women eating their babies. Whether we have a positive utopia or a negative utopia hinges on keeping the laws of our Creator.

Corrective or Prescriptive Actions: Too much of the intellectual response to Communism was focused on “anti-Communism.”  Not enough effort was placed on repentance and reformation of Western culture in terms of Bible law.  Obeying the law of God is the only cure and the final cure for all such tyrant regimes and conspiracies.