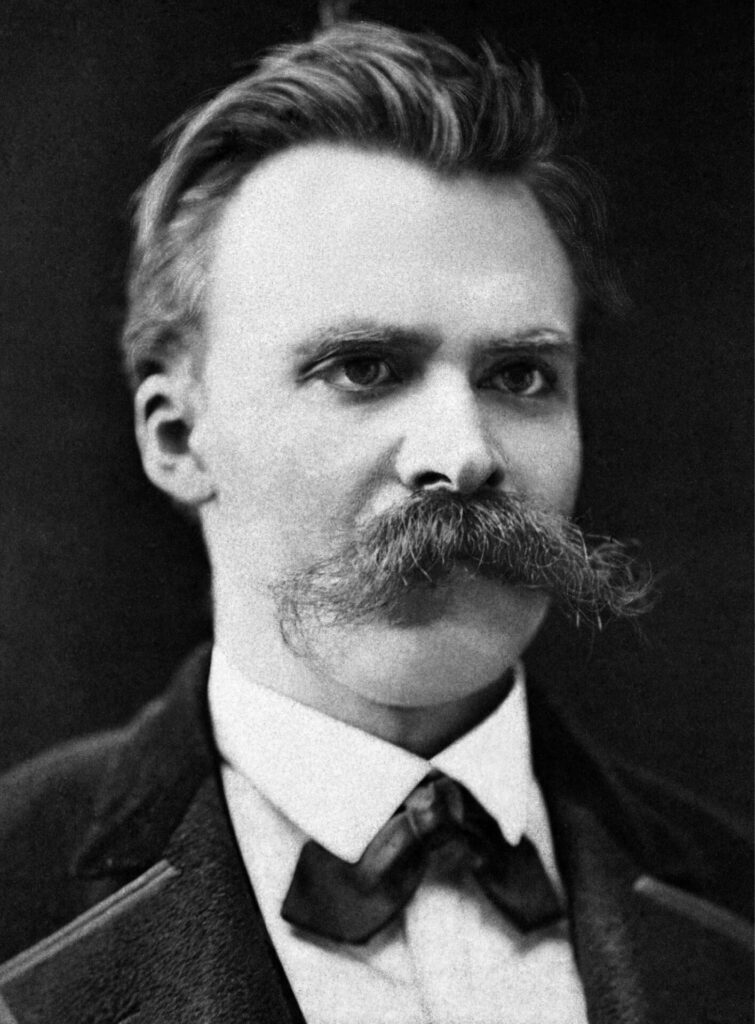 “God is Dead” declared Nietzsche in 1885. This was the inevitable conclusion from a chain of philosophical reasoning that began when William of * Occam first drew the line between faith and *reason. Actually, we could trace the chain all the way back to Eve’s decision to “be as *God”, deciding for herself what was right and wrong. The inevitable implication of such a moral choice is to declare God and the authority of his law null and void, i.e. dead. As a necessary consequence, *evolutionary determinism becomes the standard in every realm of existence. “* Might makes Right” in the evolutionary paradigm and according to Nietzsche, a powerful “overman” or *“superman” will eventually emerge from the conflict to impose his *autonomous standards. According to Nietzsche, Jews and *Christians, as representatives of the archaic path of biblical weakness, must be eliminated. In this way, Nietzsche provided the inspiration for Adolf *Hitler and a host of other 20th century tyrants. Nietzsche’s position is a denial of ultimate *reality, which led in the end to his *insanity. God declared Nietzsche to be dead in 1900.

Who was Friedrich Nietzsche? (1844-1900) Friedrich Nietzsche was a German philosopher most responsible for the extension of Evolutionary doctrine to a broad range of social applications via his multifarious adherents. For example, the German Nazis appropriated Nietzsche to bolster the oppressive Third Reich. By contrast, Ayn Rand took Nietzsche’s idea that the strong have the right to dominate the weak utilizing the mechanism of the free market.

Historical context. The theory of evolution was the driving force in 19th century philosophy. The ground was prepared for acceptance of Darwin by Hegel’s dialectic of history (Phenomenology of Mind, 1807) and Comte’s sociological view of historical evolution (Positive Philosophy, 1842). Sometimes referred to as “the philosopher of evolution”, Nietzsche extended its tenets beyond biology to other disciplines such as religion and political science. In doing this Nietzsche denied the passivity of Darwin’s theory, its cyclical view of history, and its assumption that progress is upward (1).

Nietzsche’s most influential works were Thus Spake Zarathustra (1885), Beyond Good and Evil (1886), and his last major work published in 1901, The Will to Power. These were produced during the third, or so-called “ethical” period of his career which ran from 1883 until 1889. Here his focus is on conduct, as opposed to his earlier emphasis on thought and feeling. He made much of an alleged Jewish plot to impose the values of weakness (Old Testament morality) on Western civilization. This Nietzsche claimed was inspired by revenge toward their Aryan conquerors (European Caucasian) at the beginning of the Christian era (Anti-Christ). His hatred of the Christian rivaled that of his hatred for the Jew, although ironically he excoriated anti-Semitics.

Summary of Nietzsche’s teaching. Despite denials by some of his disciples, Nietzsche’s fundamental teaching is a prescription for tyranny. He elevated an apotheosis of man, an “overman”, who had liberated himself from traditional values and biblical morality, which are held to be contrivances and idols of the weak. The “overman”, or “superman”, possesses a will to power, or self-assertion, that compels him to create his own values to replace the traditional values of kindness, gentleness, love, etc. These he held to be the self-serving aspirations of weaklings and slaves. By contrast, the ideal man is strong, courageous, ruthless toward himself and others and charts his own destiny. These qualities can only be tested and manifested in the context of war and as a superior species of man evolves through conflict. Nietzsche subjugates “being” to the process of “becoming” and a cyclical view of history. The correspondence to Darwin and Hegel is unmistakable.

Nietzsche was possessed by the insane desire to be God. “If there were Gods, how could I endure it to be not God!”, he raged, “Therefore there are not Gods.” (My Sister and I, p. 171). Thus, he arrived at his notorious conclusion that “God is dead..” “Whither is God?” he [Zarathustra] cried, “I shall tell you. We have killed him – you and I. All of us are his murderers. But how have we done this? …Do we not feel the breath of empty space? Has it not become colder? Is not night and more night coming on all the time? …Do we not hear anything yet of the noise of the grave diggers who are burying God? …God is dead. And we have killed him” (Thus Spake Zarathustra). Thus, Nietzsche was the apostle of Nihilism, which by definition (Oxford Dictionary) is “the rejection of all religious and moral principles” or “a form of skepticism maintaining that nothing has a real existence.”

Since God is dead, judgment is banished, and good and evil have ceased to exist as distinct categories. The Jew remains the abiding symbol of biblical morality and must be extinguished. The anti-Semitic emphasis may have come from Nietzsche’s sister Elisabeth, who became the editor of his work. Nonetheless, it is here that we find the driving motive underlying Hitler’s hatred of the Jews. “As ye have done it to one of the least of these my brethren,” said Jesus, “Ye have done it unto me.” In Beyond Good and Evil, he asserted that a lie may be good or evil depending on the context. “The question is,” he said, “how far an opinion is life-furthering, life preserving, species preserving…we are fundamentally inclined to maintain that the falsest opinions …are the most indispensable to us.”

Rather than the Bible, Nietzsche drew inspiration from the ancient Greek gods, Apollos and Dionysus. Apollos standing for the Greek love for order and beauty, and Dionysus representing orgiastic chaos and destruction of the old in preparation for rebirth of the new. Nietzsche condemned Christianity for failing to synthesize the two principles and banishing the fundamental life-force of Dionysus.

Implications for subsequent history. Nietzsche cast a long and dark shadow over the twentieth century. “I call Christianity the one great curse, the one enormous and innermost perversion, the one great instinct of revenge, for which no means are too venomous, too underhanded too underground and too petty. I call it the one immortal blemish,” he wrote in his 1888 diatribe, The Anti-Christ. According to a World Magazine editorial, “Nietzsche’s hostility to Christianity, set the tone for a century of persecution in which more Christians died for their faith then in the previous 19 centuries combined.” (2) That the 20th Century has been called by some “the century of blood” is due in large measure to the raving lunacy of Friedrich Nietzsche. He was the inspiration for Adolf Hitler and countless other would-be demi-gods. For some time, he was the close friend of Richard Wagner, Hitler’s favorite composer. Thus, Nietzsche’s war against God, could be nothing other than a war against man, as the race of “superman” crushes the old humanity. Might makes right.

Biblical analysis. As man drifts farther and farther from God and his Revelation he drifts farther and farther from reality. The primordial temptation, whispered to Eve in the Garden was “ye shall be as god.” This was the temptation that consumed Friedrich Nietzsche, resulting ultimately in his literal insanity “Woe unto them that call evil good, and good evil;” said Isaiah, “that put darkness for light, and light for darkness….” (Is. 5:20).

The utter folly of Nietzsche’s philosophy is well-stated in the grim humor of the famous cartoon by Larkin in which the placard of one demonstrator carries the inscription, “God is Dead: Nietzsche”. An opposing placard sardonically replies, “Nietzsche is Dead: God”.

Corrective or Prescriptive Actions: Nietzsche’s philosophy can lead only to strife, which Jesus declared to be characteristic of the Gentiles: “and their great ones exercise authority upon them. But so shall it not be so among you,” he said, “but whosoever will be great among you, shall be your minister.” (Mk. 10:42,43).