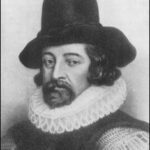 Francis Bacon is known as the Philosopher of Modern science. He laid down the method and philosophy of the scientific method. This is an inductive method of arriving at truth by studying things in the world. Bacon gave lip service to the Bible, but set forth a philosophy of secular progress based on the scientific method: Knowledge is power. Thus, science replaced God as the source of truth.

Who was Francis Bacon? Francis Bacon (1561-1626) was a lawyer, essayist, and lord chancellor of England. He was the first to spell out the process and philosophy for the scientific method. Bacon coined the phrase “knowledge is power”, to define a philosophy of secular progress based on the scientific method. He believed that “We are much beholden to Machiavel and others, that write what men do, and not what they ought to do.” Rather than the source of power, the Bible presents knowledge as the foundation of righteousness and discretion (Prov. 1:1-9). Bacon’s quick wit usually served him well as he rose in the courts of Elizabeth and James I. Once as lord chancellor under Elizabeth he presided over the criminal trial of a man named Hogg. The defendant whimsically asked that he get off easy. “For” he noted, “Hogg must be kin to Bacon.” “Not until it has been hung,” was Bacon’s instant reply.

Historical context. The scaffold of modern science was set in the 16th and 17th Centuries on somewhat shaky footings.  Prior to Descartes, Revelation was the starting point for almost all philosophy.  After Descartes “went into his stove” (room with a stove) the point of reference became the mind of man.  Math as a function of man’s reason became the guide to ultimate meaning.  Decartes represented the deductive  reasoning process.  Meantime, Bacon pioneered the inductive approach of modern science.  Newton brought a fusion of the two.  Bacon’s inductive method grew out of the renewed focus on the particulars of the natural world.  This resulted from Thomas Aquinas’ focus on Aristotle in Summa Theologica.

Summary of Bacon’s teaching. Francis Bacon developed the process and philosophy of the scientific method. This involves careful observation, study design, and looking for patterns in the data.  The final step is applying the data to practical ends such as getting rid  of poverty. Bacon’s approach is summarized in one famous passage.  “If a man will begin with certainties, he shall end in doubts;” said Bacon, “but if he will be content to begin with doubts, he shall end in certainties.” In New Atlantis Bacon ignores the communism of the earlier Utopias.  Instead he describes  a scientific elite above the bureaucrats. Utopia means “nowhere”, an ideal condition that cannot be achieved.

Implications for subsequent history. However, in Novum Organon (1620) he wrote that no man “can search too far or be too well studied in the book of God’s word, or in the book of God’s works.”  Bacon hailed from a Puritan background and professed Christianity,  but his  worldview short-circuited his profession. As we have seen, he exalted knowledge just for technical prowess over the world.  Moreover, he suggested neutral zones of knowledge, aloof from the Bible.  This was channeled into a theory of secular progress, with science as messiah. Thus, Bacon is sometimes called the “Prophet of the Scientific Revolution.” The “Royal Society” of the late 16th Century was cast in the mold of Bacon’s New Atlantis (1627).

Francis Bacon had unbounded scientific genius and  ambition. In his later years he became the great rival of Sir Edward Coke.  Bacon fawned for the favor of the scandalized James I. Meantime, Coke upheld the Common Law against James’ church court, the High Commission.  James used the High Commission to teach and enforce his claim to rule by Divine Right.  Bacon’s efforts were not appreciated by his peers, especially the object of his pandering. It was not until after his death that Bacon was accepted.

Biblical analysis. Francis Bacon was a man of Christian profession and brilliant mental success.  He was  compromised by a naturalistic worldview and a desire for fame and status.  As the 20th Century would reveal, the premises underlying his empirical (sense based) science were naïve. First, the supposed neutrality of the scientist in studying his data is mythical. One observer looks at a glass of water and says it is half full; another looks and says it is half empty. The facts do not explain themselves apart from the premises of the interpreter.

Moreover, the methods of measuring and summing up the data are imprecise, despite the use of math and technology. The reason studies are repeated over and over is because the outcomes always vary — however slightly – due to slight change in the observer, the instrument, or in the object itself. And even the statistics used to sum up the data require arbitrary premises, which can lead to various outcomes. Scientific “truth” changes almost as often as fashion in clothing. Einstein himself with his eyes on the heavens once said, “We know nothing about it at all…the real nature of things, that we shall never know, never” (20).

Corrective or prescriptive actions. To raise science to the throne of God as the undisputed source of truth is unscientific as well as blasphemous. Thus, even our scientific efforts to observe and sum up the world around us must be governed by the guidelines of Bible truth.