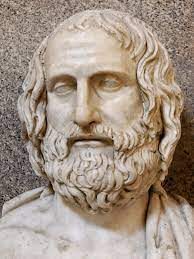 Euripides was the third of the three great Athenian *dramatic poets.  He wrote during the period when Athens faced defeat in the *Peloponnesian War and often reflected the *secularizing tendencies of the Greek *philosophers, such as Socrates.  In the Bacchae Dionysus, the god of *wine and revelry” has enchanted the women of Thebes and enticed them to a woodland *festival.  *Pentheus, the ruler of Thebes, tries unsuccessfully to imprison Dionysus and is then enticed by the god to *spy on the women in feminine garb.  Pentheus is torn from a tree in which he is hiding and savagely ripped to pieces by the women, led by his own *mother.  The message seems to be that civilization must *compromise with the spirit of dissipation in order to *pacify it, in contrast to the biblical ideal of civilization subdued by the law of Christ, the King of kings

Who was Euripides? (480?-406?) Euripides was the third of the three great Athenian dramatic poets , who came on the scene late enough to be influenced by Greek philosophers such as Socrates and the Sophists. Eighteen of Euripides approximately 90 productions are extant. Of these, The Bacchae is the best known and illustrative of his tendency to comment on a contemporary problem in the context of an ancient myth or legend.

Historical context. Euripides lived near the close of Athens’s golden age under Pericles, an era of great productivity inspired to some extent by the relative freedom that existed in fields such as education. By way of contrast, education in Sparta was compulsory, state-run, and narrowly focused on military training. As a consequence, Sparta produced no science, literature or art and left no legacy. Education in Athens, on the other hand, was based entirely on private schools that competed for the educational dollars of parent customers. The “Golden Age” of Greek classical literature, philosophy and architecture was the result, even though it rested on a humanistic base (1).

More than any of the earlier playwrights — Aeschylus and Sophocles — Euripides employed his art to comment, often cynically, on the socio-political developments of his age, the latter part of the 5th century B.C. His characters and heroes were more likely to be ordinary citizens, than ancient gods or the legendary heroes of Homer’s epics. Thus, he reflected the secularizing tendency of the Greek philosophers. The Bacchae was produced near the end of the Peloponnesian War (431-404 B.C.) in 407 B.C., reflecting the violent animosity among the Greek city-states. The hubris of Athens in provoking the war was mirrored in the hubris of Euripides’ Thebes. Thebes was a city-state in league with Sparta, lying to the northwest of Athens.

Summary of Euripides’s teaching. In Greek lore, Dionysus or Bacchus was known as the “god of wine” and revelry. The offspring of Zeus and the Theban princess Semele he was born prematurely at his mother’s accidental death, sewn up in Zeus’ thigh, and then reborn. Thus, he came to be associated in history with the death of the old and violent rebirth of the new every spring. He is traditionally accompanied by mortal women, who have fallen under his spell and participate in frenzied, nature festivals in his honor outside the city.

The Bacchae opens on just such a woodland festival (initially subdued) of the women of Thebes, who have been enchanted by Dionysus because the city has forsaken the religion of his mother. Pentheus, the ruler of Thebes, tries in vain to imprison Dionysus, who unleashes an earthquake that destroys the palace and prison. Pentheus then succumbs to Dionysus’ temptation to spy on the women, and in feminine garb he establishes an observation post in a tall pine just outside their camp. Informed by Dionysus that a man is spying on them, the women, led by his mother Agave, tear Pentheus to pieces: a sacrificial offering to Dionysus.

One obvious theme of the play is the conflict of civilization, represented by Pentheus with forces of disorder and dissipation, represented by Dionysus. The power of Dionysus to corrupt even Pentheus points to the need for the city to pacify and invite Dionysus into its community. Chains and prisons cannot contain him. Dionysus is always represented as convivial, but intolerant of those who refuse to give him due respect as a god. Thus, compromise of the orderly life of the city is necessary. “The ‘solution’ offered by the play seems to be that, to survive, the ordered city must add a dash of Dionysian frenzy. After a week of disciplined work, citizens should have the weekend to retreat to the mountains to dismember some goats” (2).

Implications for subsequent history. Euripides challenged the ancient gods and the traditional morality of the past. He used his plays to dramatize both the best and the worst of human nature. Euripides was criticized by contemporaries for the structure of his work. For example, he relied heavily on an affected and artificial prologue which seemed to give away too much of the story. His use of the choir and interesting discursive episodes often do not appear to support the action. Moreover, he was accused of taking liberties with the stories of the gods, and sometimes employed their miraculous powers in a superficial way to resolve a plot.

Euripides was attacked by the comedy writers of his day for his departure from conventional norms of morality and religion and for his unsophisticated use of dialogue. Aristophanes, for example, lampooned Euripides in The Frogs in 405 B.C. Because he was iconoclastic and retiring by nature, Euripides was not overly popular with the gregarious Athenians during his lifetime, but his greatness as a playwright was acknowledged at his death.

The Bacchae has been used to excuse unlawful behavior even by Christians, who too often have been intent on interpreting Christian truth in terms of Greek categories. For example, the following taken from a Christian interpretation of the classics is typical: “Some scholars have compared Dionysus to Christ himself, because in various tales of Greek mythology he has a miraculous birth and is pursued, dismembered, and then restored. Is the judgment of Dionysus similar to the Christian injunction not to limit God in terms of law or human institutions?” (3) The answer to that question is an emphatic “no, it is not at all similar, if such an injunction even exists”.

Several hundred years later the stability of Rome was challenged by the Bacchaen mystery cult, which they violently suppressed.   In modern times Marx looked back to the example of the Bacchae and the need to deconstruct the existing social order as the necessary prelude for reconstructing the ideal Communist state.  It is ironic that Demonstrations of thousands of women paved the way for the Communist revolution in Russia.

Biblical analysis. According to Leithart, “Yahweh, not Pentheus, builds a city of genuine order and beauty; and Yahweh, not Dionysus, is the true God of wine” (4). For example, “the vine said unto them, Should I leave my wine, which cheereth God and man, and go to be promoted over the trees?” (Judges 9:13). But the Greeks substitute the fear of God for a terror inspired by an unpredictable god as the foundation of wisdom, rather than reverence for and trust in the changeless God of the Bible (Pr. 1:7). The closing lines of the play summarize this outlook: “Gods manifest themselves in many forms, Bring many matters to surprising ends…And that is what has happened here today.”

Corrective or Prescriptive Actions. Rejoicing with wine and feasting is good (and commanded) in moderation. But carried to excess, the use of wine, leads to inebriation and loss of control, which is condemned by the Bible.