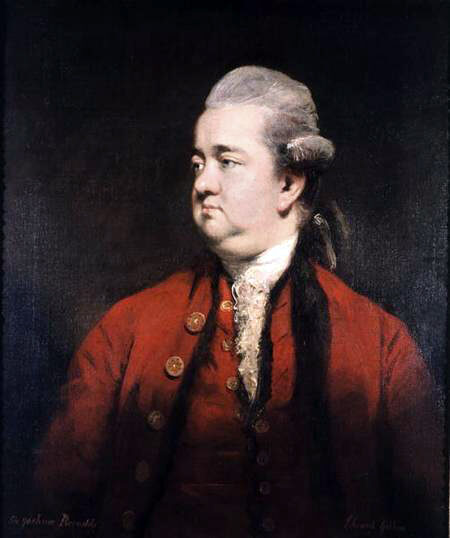 Edward Gibbon was preceded in time by empiricists like David *Hume, whose work served to divorce *philosophy from Revelation.  Rejecting the *Calvinism of his youth, Edward Gibbon interpreted history in his the monumental Decline and Fall of the Roman Empire as the outworking of natural law and *mechanical causation.  The *sovereignty of God was ignored as the causative factor in history.  Christianity was subtly ridiculed and not so subtly indicted as a factor contributing to the downfall of Rome.  Gibbon’s pioneering work led eventually to a pessimistic view of history and an interpretive school in which the *opinion of the historian is more important than the story told by the facts themselves.  When God is excluded from history, the *state assumes the place of prominence as “god walking on earth.”  This is reinforced by Gibbon’s criticism of the orthodox position at *Nicaea, which elevates Christ to His proper position as God and thus Lord of *kings on earth.  The *statist bias may be detected in Gibbon’s undercurrent of nostalgia over loss of the old Roman Empire as man’s great political hope.

Who was Edward Gibbon? (1737-1794) Edward Gibbon served in the English Parliament for 12 years, but is best known for his monumental Decline and Fall of the Roman Empire, which he began in 1766.

Historical context. Although trained by a Calvinist pastor, Gibbon’s work is colored by the skepticism of the Age of Reason. His history is noted for its ethical evaluation and comment, but ironically he pointed to Christianity as a major cause of the decline of Rome. His history was colored by his early rejection of Christianity. “It was here [at the age of seventeen],” he said, “that I suspended my religious inquiries.”

The irrationality of the British empiricist philosophers – progressing gradually from Locke through Berkeley and Hume — eventually influenced the work of historians such as Gibbon (1). Hume himself declared the first volume of Decline and Fall to be a classic when it first appeared in 1776 on the eve of the American Revolution. The empiricists began their quest for knowledge with the material universe rather than with God, which led them in the case of Hume (1740) to deny the reality of all cause and effect relationships. The cardinal point was that philosophy had been divorced from Revelation and led to skepticism about man’s ability to know anything in reality.

To Gibbon, this meant that history was not directed by God’s superintending hand and purpose, an essentially Deist position. Instead, the controlling factor in history was natural law and mechanical causation as described by Sir Isaac Newton in Principia Mathematica . Or as Gibbon explained it, it is “history related to and explained by the social institutions in which it is contained.”

Summary of Gibbon’s teaching. Not only did Gibbon lay the blame for the fall of Rome on the shoulders of Christianity, he denied the essential point of Christianity, that Christ was God in the flesh. He made this clear in a famous footnote criticizing the findings of the Council of Nicaea, which hinged on a single letter in two Greek words. “I cannot forbear reminding the reader,” he said, “that the difference between the “Homoousion” and “Homoiousion” is almost invisible to the nicest theological eye.” The former meant that Christ was “one essence” with the Father; the latter that He was of “like essence.” Had “Homoiousion” triumphed the Arian view that Christ was merely an exalted man would have prevailed and the emperor would have unrestrained Lordship over the temporal, political realm. If Christ is Lord, the emperor is accountable to Him. More importantly, if Christ is less than God He would be unqualified to die for the sins of the entire human race. Gibbon was not ignorant of the difference and he resented it because his allegiance was to the state, personified in Rome, as man’s great hope. He resented Christianity as the alleged destroyer of his hope for political salvation.

As noted by Francis Schaeffer (2), Gibbon listed five attributes which marked Rome at the end and stand as a warning for the West today:

1) A mounting love of show and luxury (that is affluence),

2) A widening gap between the very rich and the very poor,

3) An obsession with sex,

4) Freakishness in the arts, masquerading as originality, and enthusiasms pretending to be creativity, and

5) An increased desire to live off the state.

Implications for subsequent history. When man rejects God, he is doomed to repeat the foregoing cycle of sin and judgment – a cycle to be broken only by repentance and obedient conformity to the purposes of God. Such obedience results in blessing and prosperity for men and nations. “Righteousness exalteth a nation, but sin is a reproach to any people” (Pr. 14:34). Thus, Gibbon contributed to a growing attitude of pessimism regarding a history from which God is excluded.

Unfortunately, Edward Gibbon led the way for subsequent historians to interpret history as if God were not there. Having lost touch with historical reality, this outlook means that eventually what historians think about history assumes greater importance than the actual facts of history. This has been a key factor in the decline of the West.

Biblical analysis. If the Bible is clear about anything, it is that God is sovereign in His control of even the minutest details of history. In I Kings 22:34 we read that “…a certain man drew a bow at a venture, and smote the king of Israel between the joints of the harness:….” In the words of the Westminster Confession God’s providence is defined as “His control of all his creatures and all their actions.” As Nebuchadnezzar, ruler of Babylon gladly acknowledged through bitter experience, “And all the inhabitants of the earth are reputed as nothing; and he doeth according to his will in the army of heaven, and among the inhabitants of the earth: and none can stay his hand, or say unto him, What doest thou? (Dan. 4:35). Ultimately, it is impossible to write an accurate history, if one fails to account for this fundamental fact of life. To attempt to do so is to dishonor the Lord of history.

Corrective or Prescriptive Actions: The realm of the historian, like all other disciplines, must be reclaimed for Christ. This means not only a devotion to historical fact, but a presupposition that God controls all the details of history for His ultimate purposes. The ultimate purpose being the establishment of the kingdom of His son over all the nations of the earth (Psalm 2). In the words of the Psalmist, We will not hide them from their children, shewing to the generation to come the praises of the Lord, and his strength, and his wonderful works that he hath done” (Ps 8:4).