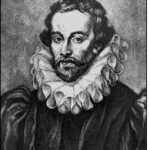 Edward Coke was the great defender of the Common Law during the reign of the tyrant king James I of England. James used the system of church courts, the High Commission, to enforce his theory of the Divine Right of Kings. As Lord Chancellor, Coke upheld the rights of English- men under the older system of common law. Sadly, his rulings were based on natural law and reason rather than the scroll of Biblical law.

Who was Edward Coke? Edward Coke (1552-1634) was an English jurist and champion of the common law.  He resisted attempts of Elizabeth I, James I and Charles I to overrule that law. He wrote Institutes of the Laws of England (1628) and Reports.  The latter consisted primarily of notes taken during cases he heard from 1600 to 1615. Coke was also a primary author of the Petition of Right (1628).  This was the most forthright statement of English freedom and due process of law to that point. He was father of the Whig outlook on history. There was quite a stir in London, when Coke (pronounced Cook) married the high-born, Lady Elizabeth Hatton.  Cook had risen from very humble origins. One day he laid a hand on his wife’s stomach and felt a baby stirring. “What?,” he exclaimed, “Flesh in the pot?” To which the lady reportedly responded, “Yes, or else I would not have married a cook.” Perhaps it was such simple pleasures that prompted Coke to rule, “The house of everyone is to him as his castle and fortress, as well for his defense against injury and violence as for his repose” (21).

Historical context.  European law can be traced in large measure to Justinian’s legal code. On the other hand, “English Common Law” had its roots in the biblical law code of Alfred the Great.  Alfred was the Anglo-Saxon ruler of England from 871 to 899. In a dramatic turn about, Alfred defeated the Viking invaders and led them en mass to Christ. He then proceeded to rule South England jointly with the defeated Viking chieftain, Guthrum.  They ruled as Christian princes under the law of God.

Later, a new and allegedly biblical legal theory gained  ascendancy, especially in the 16th and 17th centuries.  The Divine Right of Kings was most ably expounded by Richard Hooker. Edward Coke, Lord Chancellor for James I, tried to restore the older Anglo-Saxon view.  Actually, the biblical basis in legal theory had begun to fade long before, as early as Magna Carta (1215).   Magna Carta was signed under duress by King John in the Meadow of Runnymede in 1215.

Summary of Coke’s teaching. Coke was wrestling against an unbiblical union of church and state.  He was also up against an unbiblical theory of Divine right.  Because the Church of England (Anglican) was the established church, its bishops were the King’s agents. Elizabeth I had set up a supreme church court, called the High Commission.  It functioned in some ways like a Protestant Inquisition to try “heresies, schisms and …enormities.” Coke, at considerable personal risk, focused on the word “enormities.”  He used his common law courts to overturn High Commission rulings he didn’t think were “enormous.”  In the process he expanded, defined and updated the Common Law of England.

Implications for subsequent history.  Coke upheld the common rights of free Englishmen.  Sadly, he was wielding a blunt instrument, Common Law rather than undiluted biblical law. “For in their selection of what customs to recognize…the judges employed the test of ‘reasonableness'”, rather than Scripture (22). Thus, “right reason” slowly came to replace the Bible as the basis for law.  Coke set a precedent for judicial review of Constitutional issues.  This was carried over into England’s American colonies by John Marshall under the U.S. Constitution. However, the link to biblical law has grown obscure.  As a result judicial review has become more and more oppressive.

The American colonists relied heavily on Edward Coke and by extension Blackstone’s Commentaries  (1765).  These gave legal justification of their revolt against George III.  But, they ignored the great English jurists at those points they found inconvenient.  One such point was the theory that Parliament was omnipotent. In this they felt that Coke had merely transferred absolute power from  one tyrant (the king) to another potential tyrant (Parliament).

Biblical analysis. By the time the common law was codified in Blackstone’s Commentaries, it was loosed from its Bible mooring.  It now was adrift on a sea of natural law based on “right reason.” Natural law is arbitrary.  Blackstone paid lip service to the supremacy of Bible law in his Introduction.  But, he made only a few oblique references to the Bible in his entire 4-volume commentary. A look at Magna Carta also reveals the same model.  There is  a formal tip of the hat to God, but no direct reference to Bible law.  Instead it refers only to “the law of the land.”  A proper separation of power will not emerge unless king and parliament alike comply with the Law of Moses.

Corrective or prescriptive actions. In the critical work of reforming the law of nations we must go way back.  Farther back than the Common Law of Edward Coke and even Magna Carta.  The common law must be tied directly to the Bible, chapter and verse.  If not, it takes only a few centuries to decay to natural law and then to humanistic positive law.