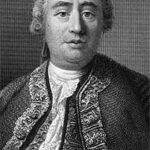 As an empiricist, David Hume believed knowledge comes from sense- data alone. He traced his theory to some disturbing conclusions. First, he noted that thoughts appear in the mind as discrete, unconnected images, as if on a stage. The fact these images are discrete makes cause and effect – and therefore knowledge from science itself – im- possible. Only a Bible worldview can overcome humanistic skepticism.

Who was David Hume? David Hume (1711-1776) was one of three famous British empiricists.  The other two were Locke and Berkeley.  Hume alone took empiricism to its logical outcome in skepticism. He wrote A Treatise of Human Nature (1740) and Dialogues (1779).  Critical of revealed religion, he was notably tolerant of philosophy. His remedy for religious zealots was to oppose “one species of superstition to another, set them a-quarreling; while we ourselves, during their fury and contention, happily make our escape into the calm, though obscure, regions of philosophy.” He was not averse, however, to hearing a good sermon.  In fact, he often went to the church of a staunch orthodox preacher near his home.   One time Hume was challenged about saying one thing and doing another.  “I don’t believe all he says,” Hume replied, “but he does, and once a week I like to hear a man who believes what he says.”

Historical context. The Enlightenment rose in full bloom during the early 1700s.  Man’s trust in the power of reason was at an all-time high.  David Hume’s Treatise of Human Nature appeared in the midst of this euphoria..  In it he argued that no one can gain any true knowledge from either their reason or senses.  His skepticism seemed to make sense given his humanistic start point.  Hume was received with great fanfare during a trip to Paris.  But his straying from the prevailing “orthodoxy” was too much for most of his fellows.  The key exception was Immanuel Kant  Even so, most philosophers since Kant have been empiricists.  Empiricism is the idea that knowledge is based on our senses and experiment rather than on theory.

Summary of Hume’s teaching. Epistemology deals with the question of how we know and confirm what we know.  Hume made a series of observations and conclusions about the nature of reality.  This led him step by step to skepticism.  He came to deny that man can know anything.  In the first place he noted “that all the perceptions of the mind resolve themselves into…impressions and ideas.”  Any object seems to get smaller as we move away from it.  So, what we are “seeing” must be only an image in the mind.  It cannot be an actual object outside the mind.  Plus, each of our perceptions is discrete.  That means they are distinct and separate. They appear one after the other in the mind as if on a stage.  But try as we may, we cannot grasp the nature of that stage or “mind.”  Thus, neither material nor immaterial (spiritual) substances exist as objects in the world.   They exist only as images in the mind.

Moreover, it is against logic to make probabilistic statements about the future based on the past.  This is because probability assumes  nature is uniform.  But Hume has shown above that it is not.  Thus, we must throw out both a priori reasoning (deduction) and a posteriori reasoning (induction).  Both defy logic because there is nothing to connect our mental  sensations.

Implications for subsequent history. Hume traced empiricism to its grim conclusion.  Grim that is for the system of unbelief.  If we fail to start with the Bible’s view of the world, logic will drive us to despair.  Scientific knowledge is shown to be contrary to logic by Hume.  Philosophy also becomes a matter of personal  taste.  The idea of chance negates probability theory.  Immanuel Kant, tried to rescue man from Hume’s skepticism.  He came up with an amazing theory of philosophic realism in which  the mind is the creator of all reality. The after shock of Kant on almost all academic subjects has been profound.

Biblical analysis. Cornelius Van Til, taught that the  proof of Christianity lies in a transcendental argument.  That is, the proof of Christianity lies in the impossibility of the contrary.  In the end, all systems of unbelief reduce  to absurdity.  David Hume has ably shown this to be the case.  Apart from the biblical worldview we cannot  reason by laws of logic.  We cannot derive truth using the scientific method.  We cannot arrive at moral absolutes. These things make sense only within the context of the Bible worldview.  At the heart of that lies an unbending revelation from God about the nature of what is real.   “In the beginning was the Word, and the Word was with God, and the Word was God” (John 1:1). The uniformity we see in nature cannot exist apart from Christ holding it all together.  “And He is before all things and by Him all things consist” (Col. 1:17).

Corrective or Prescriptive Actions: The work of David Hume may be put to good use in defense of the faith.  Hume has done half of our work by showing that all   non-believing thought forms tied to cause and effect defy logic.  To “answer a fool according to his folly” (Pr 26:5) we only have to point to Hume’s argument.  He proved  that in the non-believing system cause and effect cannot exist.  Therefore all inductively derived, “scientific” truth is unfounded.