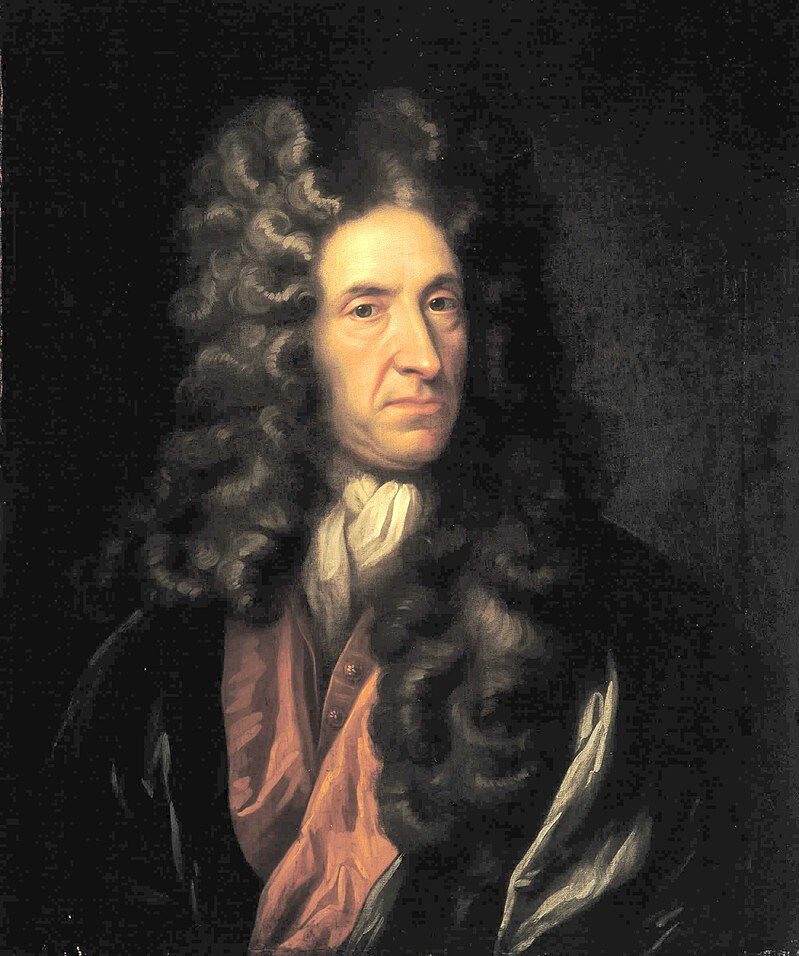 “Robinson Crusoe” – modeled after the Bible’s *prodigal son – is the story of a young *adventurer who is cast ashore on a desert island, then miraculously *converted to Christ and preserved alive.  Near the end of his long sojourn, God enables him to rescue a *Careb Indian, who has been brought to the island to be *cannibalized by enemy warriors.   This aspect of the story exposes the fallacy of *Rousseau’s myth of the “*noble savage.”  “Friday” becomes Crusoe’s inseparable companion and is soon converted to Christ.  In the end they foil a *mutiny on a visiting ship and are thereby rescued.  Crusoe marvels at the *sovereignty of God, not only for delivering his soul, but for placing and preserving him as an outcast for over a quarter century in order to prevent this miscarriage of justice.  In addition to this famous classic, Daniel Defoe also employed his considerable journalistic skills to support the reign of *William and Mary in England.

Who was Daniel Defoe? (1660?-1731) Daniel Defoe is one of the first and greatest British journalists and author of adventure stories.  Although he wrote over 500 books, pamphlets and tracts he is best known for his tale of a shipwrecked sailor, Robinson Crusoe. Raised as a Presbyterian, he remained faithful to the Reformed faith throughout his long life

Historical context. Archbishop Laud’s persecution of Puritans under Charles I led to the Great Migration of Puritans to Massachusetts between 1630 and 1641. Charles I and Laud were both executed, but the Puritan Revolution led by Oliver Cromwell died with the Restoration of Charles II in 1660. Cromwell’s rule — the Interregnum — many royalist Cavaliers of the Anglican faith fled to Virginia from the south and west of England During (1). Both Charles II and James II were Catholic sympathizers and resumed the policy of persecuting Protestants established by their predecessors James I and Charles I. This persecution triggered the migration of many Quakers and pietists from north central England to the Delaware Valley and Pennsylvania. Charles II was generally irreligious, but James II was openly Catholic and sought to reverse the Protestant reforms.

Finally, in the Bloodless Revolution of 1688 James II abdicated the throne upon the invasion of William of Orange from Holland. James attempted a counter-invasion, but was defeated at the Battle of the Boyne. William ruled both countries with his wife Mary, but for some time was not well received by many of his English subjects. William was Defoe’s only true political hero and his journalistic endeavors did much to turn the hearts of his countrymen toward William. The Industrial Revolution was beginning to emerge during this period, stimulated by advances in steam power and improvements in production of iron. Residents of the north border country and north Ireland did not benefit from these economic advances and thousands departed for the American frontier in the great Scots-Irish migration between 1717 and 1775.

Defoe had been trained for the Presbyterian ministry, but when he could not find a ministry, turned immediately to business. Suffering two bankruptcies, his business career was checkered, but he ultimately prospered as manager of a tile and brick company near London. At about the age of 40 he turned to politics and journalism. It was not until he was almost 60 near the close of his career that Defoe turned to writing novels, the first and most popular of which was Robinson Crusoe (April 25, 1719).

Summary of Defoe’s teaching. Robinson Crusoe is modeled after the biblical tale of the prodigal son. A young English gentleman ignores all the pleas of his father and takes to the sea. Eventually he settles down as a plantation owner in Brazil, but is tempted into the slave trade. In pursuit thereof, he becomes the only survivor of a shipwreck, marooned on a desert island, with only the bare necessities of life salvaged from the wreck. He is preserved and provided for miraculously by God and converted to Christ by reading a Bible he finds in a trunk from the ship. In the end he is rescued and restored to his former position.

This is captured marvelously by Defoe in one famous passage: “How mercifully can our great Creator treat his creatures, even in those conditions in which they seemed to be overwhelmed in destruction! How can he sweeten the bitterest providences, and give us cause to praise him for dungeons and prisons! What a table was here spread for me in a wilderness, where I saw nothing at first but to perish for hunger!….and in this plentiful manner I lived; neither could I be said to want anything but society….”

One modern fiction dispelled by Robinson Crusoe is the myth of the noble savage. As promoted by Rousseau and more recently the heralds of cultural pluralism, the natives of the western hemisphere lived an idyllic and peaceful existence, in perfect social harmony and primitive justice. The invasion of western European civilization — spearheaded by Columbus — introduced greed, corruption, disease and evil to this Edenic paradise. Columbus has been pilloried in recent years, a victim of this modern myth.

By way of contrast, Robinson Crusoe paints a realistic picture of primitive man apart from God in the Western hemisphere. The life of the Native American, North and South, was a life of fear and superstition, slavery to demonism, constant warfare, cannibalism, human sacrifice and debauchery. Columbus himself did not recognize this in his initial encounters with the Carib Indians, but it was the immensity of human sacrifice that horrified Cortez upon his arrival in Mexico City. Robinson Crusoe rescues his man Friday from such a cannibalistic fate at the hands of a rival tribe and leads him to a life of freedom in Christ. This view is such anathema to modern humanists that edited versions of Robinson Crusoe have appeared with all references to Christianity expunged.

Implications for subsequent history. Defoe inspired many imitators, but Robinson Crusoe remains the non-pareil of adventure literature. He has been an example to the writing art of what it means to be uninvolved and human in their stories. The book has also inspired a good deal of beautiful artwork as talented artists have given their best efforts to illustrate this classic tale.

Biblical analysis. Robinson Crusoe is a wonderful illustration of the loving sovereignty of God in caring for his human creation in the most trying of situations Why does God permit disaster and suffering to befall his people? The book of Job provides a marvelous answer to a philosophical question that has perplexed saint and sinner through the ages. The opening chapters of Job set the stage for a drama unseen by the human actors. Satan’s great taunt to God is that his people serve Him only because of the blessing he bestows upon them. In order to prove Satan a liar, God must deny those blessings for a season that His people may glorify Him also in adversity.

Romans chapter one dispels the myth of the noble savage in its characterization of pagan man. Defoe in the original is faithful to the biblical portrayal of all men apart from God, especially pagan humanity: “Because that, when they knew God, they glorified him not as God, neither were thankful; but became vain in their imaginations, and their foolish heart was darkened…Wherefore God also gave them up to uncleanness through the lusts of their own hearts, to dishonor their own bodies between themselves. Who changed the truth of God into a lie, and worshipped and served the creature more than the Creator, who is blessed forever. Amen.” (Rom. 1: 21,24,25).

In the prologue, Robinson Crusoe’s father offers this advice, “He bade me observe it, and I should always find that the calamities of life were shared among the upper and lower part of mankind; but that the middle station had the fewest disasters.” This wisdom is reflected in the prayer of Agur, “…give me neither poverty nor riches; feed me with food convenient for me: List I be full, and deny thee, and say, Who is the Lord? Or lest I be poor, and steal, and take the name of my God in vain.” (Pr. 30:8,9).

Corrective or Prescriptive Actions: The Apostle Paul suffered much for the gospel, but learned in whatever condition he found himself to be content. “I know both how to be abased, and I know how to abound: everywhere and in all things I am instructed both to be full and to be hungry, both to abound and to suffer need. I can do all things through Christ which strengtheneth me.” (Phil. 4:12, 13). May we, with Paul and Robinson Crusoe, learn contentment in all the exigencies of life.