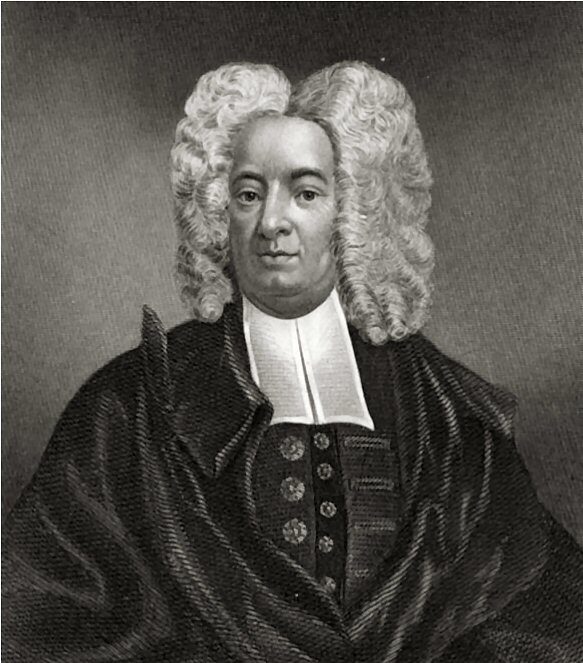 By pen and pulpit Cotton Mather strove to arrest the spirit of *declension that had beset Puritan Massachusetts in the late 17th century.  Chief among his many writings was Magnalia Christi Americana, a record of the *providential acts of God in America.  Here and elsewhere, Mather denounced the *slave trade, the spirit of *Yankee independence, and the dissolution of the Protestant work ethic in a spirit of covetousness.  Mather was also one of the first American *naturalists and the first American to be elected a member of Britain’s *Royal Society.  His Christian Philosopher lionized Isaac *Newton and inadvertently undermined Christianity.  By enlisting science as a *proof of religion, Mather unintentionally elevated its authority above that of the Bible.  Thus by dabbling in *natural theology, he unwittingly served as a transitional figure between the covenantalism of his fathers and the *anti-covenantalism of the U.S. Constitution.

Who was Cotton Mather? (1663-1728) Cotton Mather was a colonial clergyman, scientist, and prolific author, who chronicled life in Puritan Massachusetts.

Historical context. Cotton Mather was part of the third generation of Puritans who migrated to Massachusetts in the Great Migration, commencing in 1630. He served with his father, Increase, in the ministry at Boston’s North Church from 1685 to 1723 and thereafter until his own death. In general, Mather addressed a spirit of declension which was taking root in New England. In particular, he spoke to the covetousness of Boston merchants who had begun to assume the worldview of self-sufficient “Yankees” and against the practice of slave trading. Unfortunately, these exhortations fell on deaf ears. It was during Mather’s generation (1691) that the basis for civil participation was changed from church membership to property ownership.

Summary of Mather’s teaching. Mather wrote some 450 books and tracts, which cumulatively provide considerable insight into the life and times of Puritan New England. Outstanding among these are Wonders of the Invisible World (1693), Magnalia Christi Americana (1702), Essays to Do Good (1710), Curiosa Americana(1713), and the Christian Philosopher (1721).

Although Benjamin Franklin never converted to Christianity, he counted Mather among his closest friends and was profoundly influenced by Essays to Do Good, which included sharp denunciations of slavery. Mather is perhaps best known for his involvement with the Salem witch trials and his subsequent work, Wonders of the Invisible World. He has been unjustly pilloried as the instigator of a crazed and bigoted witch hunt, when in reality he and other pastors warned the magistrates not to rely on spectral evidence in the trials. Mather reported that Demons were assuming the form of innocent neighbors in their appearances and attacks on various Boston residents, thus in effect framing them. One of the magistrates, Samuel Sewall later repented in deep public humility for his complicity. Unfortunately, John Hathorne, another of the magistrates was later pilloried by his great-great-grandson, Nathaniel, in The Scarlet Letter (1).

Mather was one of the first American naturalists. He reported his scientific observations to the British Royal Society in a book, Curiosa Americana (1713), which won him membership in that august body. Later in collaboration with the Royal Society he introduced Smallpox inoculation to New England during a 1721 epidemic. The Christian Philosopher is an unabashed encomium to the work of Sir Isaac Newton. To Mather, Newton’s scientific discoveries were irrefutable evidence of God’s existence and creation of the universe. He failed to recognize that Newton’s mechanistic laws served to push an increasingly impersonal God to the periphery in the thinking of unbelieving man. At the very least, they tended to reinforce the Deistic view of God as the cosmic Clockmaker who wound up the universe, then stepped back to let it run on its own. Even worse, because Mather and other Christians tied belief in God so closely to Newtonian science, they inadvertently elevated the authority of science above that of the Bible. Later, when the Newtonian worldview was supplanted, the Bible went with it.

It is a tribute to the dazzling illusion of natural theology that a providential history like Magnalia Christi Americana, (The Great Achievement of Christ in America) could flow from the same pen with no sense of contradiction. Mather described the motivation of the Great Migration of Puritans from England to complete the work of the Reformation in the New World. He devoted hundreds of pages to God’s providential care of his people in the New England wilderness in hope of rekindling the faith of his people. “I write the wonders of the Christian religion,” he wrote, “flying from the depravations of Europe, to the American strand: and, assisted by the Holy Author of that religion, I do, with all conscience of truth, required therein by Him, who is the Truth itself, report the wonderful displays of His infinite power, wisdom, goodness, and faithfulness, wherewith His Divine Providence hath irradiated an Indian wilderness.”

The Puritan “work ethic” is given a place of prominence throughout his writings, with many corollary warnings about the dangers of covetousness. Mather also recorded the destructive effects of the Halfway Covenant, although he apparently did not fully understand it. This arose from a confused insistence of the fathers of the first generation that their baptized covenant children profess a conversion experience before being admitted to the Lord’s table. This insistence on an experiential confession alienated many in the second generation and artificially excluded them from their rightful church membership. The grandchildren were thus denied baptism until the artifice of the “Halfway Covenant” permitted it. The result was pervasive confusion and division.

Implications for subsequent history. Cotton Mather was unknowingly a key transitional figure between the Holy Commonwealth of John Winthrop and the American secular republic established in 1787. The natural theology he so persistently promoted was dubbed “physico-theology” by William Derham in 1713. It spawned an evidential school of apologetics that has plagued the church to the present day. Its modus operandi is to use evidences to appeal to the natural man in the capacity of judge rather than indict him in the position of defendant. Mather’s work dovetailed nicely and was reinforced in the next generation by the “self-evident truth” of the Scottish Realism promoted by John Witherspoon at Princeton. Jonathan Edwards took the baton from Mather and carried the experiential approach into the Great Awakening. According to Richard Westfall, “Natural religion was supposed to be the sure defender. Yet in the end the defender turned out to be the enemy in the gates” (2)

Mather’s dalliance with natural theology was also to have devastating results in the thinking of the founding generation. Mather had sent mixed messages when he equated “nature’s god” of the Enlightenment with “Calvin’s God” of the Reformation. Thomas Jefferson appealed to the former in the Declaration of Independence because he stood aloof and demanded little from his followers but a vaguely defined “natural law.” Thirteen years later, the framers of the U.S. Constitution neglected even “nature’s god” in their appeal to the even more nebulous “we the people”.

In addition to the confusion generated by the Halfway Covenant, Mather’s imprecise view of the covenant was also reflected in his teaching regarding church establishment. He drew the unwarranted conclusion that because a healthy church is essential to a healthy state, tax money from the state should therefore pay the salaries of Christian ministers. This practice of church establishment was adopted by most of the colonies and led, as it inevitably must, to religious persecution and a weakened church in subordination to the state.

Biblical analysis. In the Upper Room the last Passover became the first Lord’s Supper, the former remaining the pattern for the latter. The fact that the youngest children were included without question in the Passover is powerful evidence that the same should be allowed to partake of the Lord’s Table without inspection (paedo-communion). The children’s participation in the Passover Meal served as an object lesson of their faith and a custom grew up based on Exodus 12:26 in which the youngest son would ask the father, “What mean ye by this service?”. The father in response would provide instruction in the faith and the necessity of the shedding of blood for the remission of sin. Thus, covenant children grew up in the faith with the presumption that they were believers, unless and until their lives demonstrated otherwise, at which point they would be excommunicated.

Corrective or Prescriptive Actions: To exclude covenant children from the Communion meal with their Great King is and was a grievous sin that led to great confusion and division in Puritan New England. Jesus sharply rebuked his disciples for refusing to allow the little children to come unto Him, “for such is the kingdom of God” (Mt. 19:14). This error persists to the present day in most churches and must be corrected.