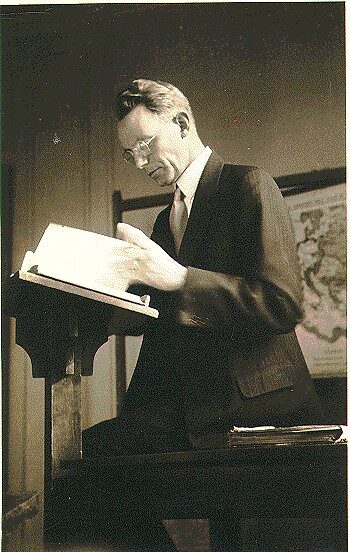 Just when things seem darkest, God raises a beacon of truth to point the way home. In mid-20th Century Cornelius Van Til developed a new approach to apologetics that places the unbeliever rather than God on trial. In accord with Proverbs 26:5, Van til tells us to use the evidence to expose the folly of unbelief, not to prove God’s Word to the skeptic. Then challenge the unbeliever to abandon his irrationality.

Who was Cornelius Van Til? Cornelius Van Til (1895-1987) was professor of apologetics at Westminster Theological Seminary.  This school trained pastors for the Orthodox Presbyterian Church in America.  Van Til is well-known for developing the presuppositional approach to Bible epistemology.  But, Van Til was no ivory tower philosopher. Professor Ron Nash — a theological opponent — relates the time when he dropped by to chat with the aged Van Til and his young pastor.  The latter was fresh out of seminary.  “I’m available for visitation at the hospital this afternoon if you need me, pastor,” said Van Til.  He was always ready to add “shoe leather” to his theology. One of his former students eulogized Van Til with a story.  “A young family came to live with him in his old home…The last time I saw him (in June 1985), he was pushing one of their children in a stroller and singing gospel hymns.”  On April 17, 1987, Cornelius Van Til joined ‘all the saints who from their labors rest.’                 He now hymns God’s praise in heaven’s choir.  He was one of the towering Christian minds of the twentieth century – who could confound scholars and sing to children.  “Van Til “wanted to be a farmer….Instead he became one of the foremost Christian apologists of our time,” wrote David E. Kucharsky in Christianity Today.

Historical context. The church in the 20th Century lapsed into a state of weakness, retreat, and irrelevance.  This came via liberalism and neo-orthodoxy. Even the evangelical wing of the church was hamstrung by pietist dogma.  This reduced the Bible to little more than a private devotional manual. The 20th century church in many ways looked like the church of Sardis.  Christ had chastised Sardis as having “the name of being alive, and you are dead” (Rev. 3:1).

Summary of Van Til’s teaching.  Two general approaches to epistemology ruled in the church for the first two thousand years.  One was an empirical approach, and the other was rationalistic.  Both systems asked the natural man to sit in judgment on the commands of God.  The first relied on the light of outside evidence.  The second looked to the light of consistency or thought forms based on logic.  In the process both lifted the authority of evidence or logic above that of the Bible.

By contrast, Van Til held out a third approach based on the Bible.  It confronts the unbeliever’s proud commitment to thinking without the Bible. Instead of raising him to the seat of a supposed neutral judge over God and His Word the skeptic is made the defendant.  No longer is it “you be the judge.”  Now, the issue to which the Christian returns again and again is, “what’s your excuse for unbelief?”  The former was Satan’s approach to Eve.  The latter was God’s approach to Adam.  We no longer assume a common ground in reason, which has  been clouded by the Fall.  The presuppositional approach assumes the only point of contact to be the image of God in man.  All men are aware of their kinship with God.  It is innate.  However, they suppress the truth in unrighteousness.  Van Til wrote nearly 30 books.  His work is perhaps best summarized in Defense of the Faith (1955) (51).  Others, like Richard Pratt’s Every Thought Captive (1979) (52), have tried to abridge Van Til.

Implications for subsequent history. Van Til’s approach gives us the seedbed of a Bible that is self-attesting.  It is therefore comprehensive in its authority.  Springing from this seedbed is a world and life view that seeks to apply the law of God to every field.  This includes economics, family, art, government, law, worship, science, and all else.  Such a worldview cannot spring from an evidential apologetic in which the law of God itself is put on trial.  At the turn of the century, the full impact of Van Til’s teaching was only starting to be felt.  Van Til limited himself to the field of apologetics and was amillennial in outlook.  But,  many of his students went on to develop the full-orbed implications of his work.  After a century of being held down, an upbeat, post-millennial doctrine of last things appeared and began to take root. A thriving home-school movement sprang up to challenge the state’s monopoly in teaching.  Many of the parent-teachers had never heard the name of Cornelius Van Til.  Hundreds of books and countless articles and papers were written to explore the implications of the new approach to knowledge.  The church awaits the blessing of God to see these ideas worked out into the culture of the 21st Century.

Biblical analysis. Presuppositionalism deals with the unbeliever as though the Bible is the final standard by which to judge all truth.  It does not, however, ask the natural man to accept this dogmatically (fideism).  Rather, it argues transcendentally and indirectly that apart from the Bible worldview, we cannot know anything.  It is a dual approach, after the pattern of Proverbs 26:4-5.  It takes the form of 1) an argument by truth, and 2) an argument by folly.  The first is a forthright statement of the biblical view.   “Answer not a fool according to his folly, lest you be like him yourself.”  If this is rejected, we turn to the second approach which points out the inconsistencies of the skeptic’s system.  We ask the skeptic to justify his allegiance to inconsistency.  “Answer a fool according to his folly, lest he be wise in his own eyes.”  The unbeliever is on trial, not God.

Corrective or Prescriptive Actions:  Van Til’s approach calls for a sometimes radical shift in the Christian’s thinking.  First, we move away from attempts to “prove” the Bible.   Second, we challenge the natural tendency to set oneself up as the judge of all truth. This approach actually simplifies the task of witnessing.  It cuts out the need to come up with a clever response to all the artful dodges of unbelief.