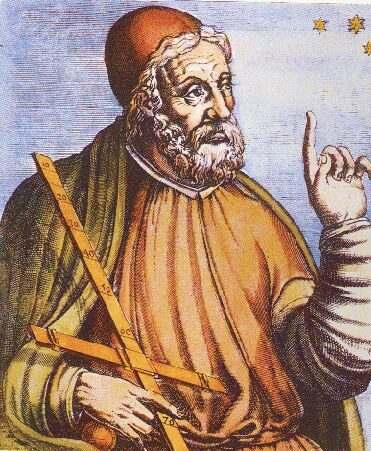 Ptolemy was an *Alexandrian scientist whose *geocentric theory governed astronomy for some 1400 years.  In the Geocentric theory the solar system is held to revolve around the *earth rather than around the sun.  Ptolemy also did important work in *geography and classification of *star magnitude.  He developed an *epicyclical” model to explain the apparent backward motion of the planets and was the first to record an eclipse of the *moon.  Ptolemy’s achievements are overshadowed by the apparent failure of his geocentric theory, which is allegedly based not simply on *conceptual and mathematic errors, but on alleged *fraud.  That was the conclusion of astronomers Delambre in the 19th century and Robert Newton in the 20th.   Ptolemy’s motives for allegedly falsifying the data may have been based on ambition or religious *heresy

Who was Claudius Ptolemy? (100-170 A.D.) Ptolemy was an Alexandrian scientist of the early Patristic period, famous for his popularization of the geocentric theory of astronomy, in which the universe revolves around a stationary earth. He authored the 13-volume Almagest, which in Arabic means “Great System of Astronomy”.

Historical context. In the postmillennial interpretation, Rome’s recovery from the period of violent convulsion is represented by Revelation’s Beast that was dead, but made alive. After a century of civil war, Augustus, the first Emperor, left to Rome a legacy of stability and prosperity. However, with the exception of the handicapped Claudius I, most of Augustus’ immediate successors – including Caligula and Nero — were cruel tyrants. At the death of Nero a brief but violent civil war wracked the Empire, culminating with the ascension of Vespasian and his two sons Titus and Domitian. Titus accomplished the destruction of Jerusalem and Domitian ruled as a tyrant until assassinated in a palace conspiracy. Nerva was then appointed by the Senate (96-98) and became the first in a procession of five “good emperors”, including Trajan (98-117), Hadrian (117-138), Pius (138-161), and Marcus Aurelius (161-180). The latter was a Stoic philosopher, who wrote his famous Meditations while engaged in battle on the German frontier. Claudius I conquered Britain and Hadrian constructed a great wall across its northern breadth. In spite of their contributions to Roman prosperity and cultural development, the “good emperors” were nonetheless persecutors of the Christians. It was during their reign that Ptolemy lived and prospered.

Summary of Ptolemy’s teaching. Although he is best known for his study of astronomy, his work in geography was of more practical value. His insistence that meridians of latitude and longitude be established as a first step in map preparation did much to advance the cartographer’s art. He also contributed a work on optics and laid the foundations for our current system of classifying star magnitude (brightness). He classified 20 of the brightest stars “first magnitude”, while those barely visible to the human eye he called “sixth magnitude”, with four gradations between. Ptolemy is also credited with being the first to record an eclipse of the moon and he made contributions to the development of trigonometry.

Ptolemy’s achievements are overshadowed by the failure of his geocentric theory of astronomy. He proposed that the heavenly bodies move in perfect circles around the earth, but also move in smaller epicycles, which accounts for their apparent backward motion at times. “Ptolemy, who used epicyclical and eccentric models to “save the appearances” with the geocentric theory, sometimes established one hypothesis to save one set of appearances and a contradictory hypothesis to save another set of appearances. Contradiction between hypothesis did not matter, so long as each hypothesis satisfied the test of simplicity in accounting for the specific appearance of nature under investigation” (1).

Implications for subsequent history. Ptolemy’s geocentric theory governed astronomy for some 1400 years until shattered by Copernicus’ On the Revolutions of the Celestial Bodies, published in 1543. Copernicus proposed the heliocentric theory, in which the solar system revolves around the sun, rather than around the earth. Even so, Ptolemy has still been regarded as an astronomer of the first rank, who summarized and collected all previous work of the astronomers of ancient Greece.

However, Robert R. Newton in his scholarly and technical, The Crime of Claudius Ptolemy, offers evidence that Ptolemy’s work is fraudulent and largely fabricated. Newton builds on an 1819 work by the astronomer Delambre, who drew the same conclusion – a conclusion that was ignored for almost two centuries. We can do little more than summarize Newton’s conclusions here by quoting him directly:

“He developed certain astronomical theories and discovered that they were not consistent with observation. Instead of abandoning the theories, he deliberately fabricated observations from the theories so that he could claim that the observations prove the validity of his theories. In every scientific or scholarly setting known, this practice is called fraud, and it is a crime against science and scholarship…In all the relevant literature… Ptolemy is considered to be an astronomer of the first rank, and the main question seems to be: Should we consider Hipparchus or Ptolemy to be the greatest astronomer of antiquity? The realization that Ptolemy’s work is fraudulent forces us to think about the previously unthinkable. We must now ask: Was Ptolemy a competent astronomer?” (3)

Newton could only speculate regarding Ptolemy’s motives for this alleged connivance; his best guess is that wanting to be known as a great astronomer, but lacking the ability, Ptolemy turned to fraud. The alternative explanation is that Ptolemy’s religious fanaticism drove him to produce fraudulent evidence in support of his beliefs. His involvement in the creation of astrological tables lends some credence to this suggestion.

Newton concludes that “All research in either history or astronomy that has been based upon the Syntaxis [Almagest] must now be done again. The Syntaxis has done more damage to astronomy than any other work ever written, and astronomy would be better off if it had never existed. Thus Ptolemy is not the greatest astronomer of antiquity, but he is something still more unusual: he is the most successful fraud in the history of science” (4).

Biblical analysis. Assuming the accuracy of Newton’s technical analysis, the only exception we might take to the above conclusion would be to point to Charles Darwin, whose theory of evolution overshadows even the geocentric theory and the flat earth theory in the naiveté of its adherents. In our opinion Darwin deserves the honor of “Most Successful Scientific Fraud” because his devotees persist in the face of so much contrary evidence in an allegedly more “enlightened” age. On the other hand, the evolutionary edifice is showing signs of stress and possible fracture after only 150 years, whereas Ptolemy reigned supreme for almost 10 times that period.

Both theories are evidence of the natural man’s susceptibility to deception – to his stubborn and pugnacious willingness to believe almost anything rather than yield to his Creator. “For the wisdom of this world is foolishness with God… He taketh the wise in their own craftiness” (I Cor. 3:19).

It is well worth remembering, however, that the Bible is written in geocentric language and it is impossible based on scientific observation alone to determine what is moving around what.  We would have to be standing outside the universe to make that determination and the only Person in that category speaks as if the earth is stationary and declares that “the earth is My footstool.”

Corrective or Prescriptive Actions. We like to believe that all men are honest, but the work of Ptolemy brings us face-to-face with an unsavory possibility: a façade of scientific accuracy can sometimes hide fraudulent methods and conclusions. Fraudulent or not, Ptolemy’s work is an l illustration of the extent to which so-called scientific proof might be in error. Science, like everything else, must be interpreted in light of the Bible, or it is rather easily led astray. In the words of R.C. Sproul, “Like Ptolemy’s geocentric system, our theories can “save the phenomena” without achieving accurate knowledge of reality” (5).