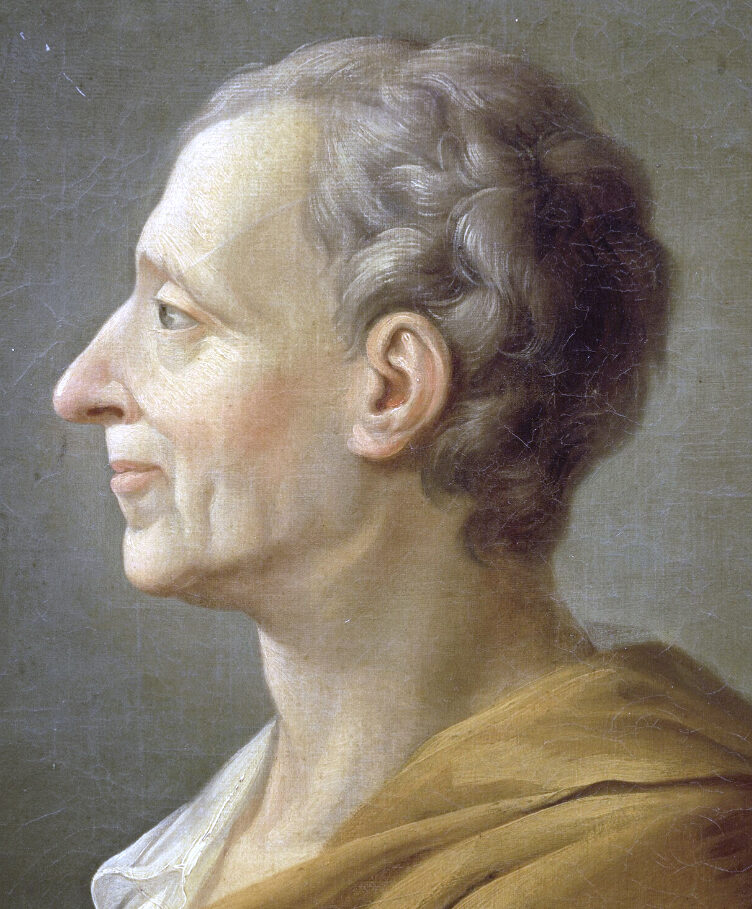 Writing in the mid-18th century, Montesquieu had a profound influence on both the American and French *Revolutions.  For example, his early satire of the *Bourbon kings in “The Persian Letters” provided the spadework for their eventual downfall.  Although he respected *Christianity, his theories of culture and government were built on a base of *natural law and are thus inconsistent.  For example, his theory of *separation of power is well-founded in scripture, as is his *contempt for democracy.  However, the biblical division of power appears to be bipartite rather than tripartite, with the executive and judicial functions combined and the legislative independent.  On the other hand, Montesquieu’s  advocacy of *socialism is clearly anti-biblical.  The latter he derived from the *pagan Greco-Roman philosophers, especially *Plato.  Likewise, his ideal of “republican *virtue”, fervently embraced by the American founders, came from classical paganism.

Who was Charles Montesquieu? (1689-1755) Montesquieu was a French nobleman, jurist, historian and political philosopher. His early Enlightenment thinking laid a foundation for the French Revolution and influenced the structure of the American Constitution.

Historical context. According to Lutz and Hyneman, Montesquieu, John Locke and Samuel von Pufendorf were the guiding lights of the “First Enlightenment”. Pufendorf and Locke were active in the last half of the 17th century and Montesquieu in the first half of the 18th. The more radical writers of the “Second Enlightenment” (Voltaire) and “Third Enlightenment” (Rousseau) came later in the third quarter of the 18th Century, immediately preceding the French Revolution. The studies of Lutz & Hyneman indicate that Montesquieu and Locke, together with William Blackstone were the most widely read political authors in America during the founding era (1). Thus, it is safe to say that in general, the American Revolution was influenced more by Locke and Montesquieu, while the French Revolution was influenced more by Voltaire and Rousseau.

Summary of Montesquieu’s teaching. Montesquieu identified several forms of government, each with its own spring of action – Democracy (greed), Republic (virtue), Monarchy (honor) and Tyranny (fear). He held up the British system as the model to emulate. Montesquieu’s ideas about the division of power are especially well-known and were cited often by the American founders in the Federalist Papers. He described the critical necessity of dividing the power of government among its several branches, thereby providing for a balance of power. Moreover, Montesquieu was cognizant of the folly of placing democratic decision-making authority in the hands of the populace. “One great fault there was in most of the ancient republics,” he observed, “that the people had a right to active resolutions, a thing of which they are absolutely incapable. They ought to have no share in the government but for the choosing of representatives, which is within their reach.”

Like the American founders, Montesquieu appreciated the Christian religion for its contribution to social stability. He noted by way of contrast the tyranny of Islamic societies and the republican forms that had followed the Reformation in Northern Europe. “The Catholic Religion is most agreeable to a Monarchy, he noted, “and the Protestant to a Republic” (26:31-31). However, in the Persian Letters he attacked the church, the doctrine of the Trinity, and a providential view of history (2).

However, when it came to the heart of the matter, Montesquieu paid only lip service to the law of God, mentioning it in the context of several other categories: laws of religion, philosophical laws of morality, and civil laws. “Antecedent to” and thus of greater importance than these, however, are the Laws of Nature “because they derive their force entirely from our frame and existence.” Rather than finding their source in God, laws arise from “the nature of things”, which was known to man in a “state of nature…before he had acquired any knowledge.” These simple laws of nature evolve into human law, law of nations, political law and civil law, all without reference to the law of God. “Law in general is human reason…” he declared, thus stumbling into the pit of judicial rebellion from the Creator.

Montesquieu has been called the forerunner of modern sociology because of his attempt to describe the interplay of forces impacting liberty in society and the formation of laws. These include geographical situation, climate, racial characteristics, and economic, philosophic and theological ideas. In a similar vein, he noted the effect of historical laws of cause and effect in his study of the Roman Empire. Chance does not reign in history, which means that it may be studied for lessons to apply in the present.

Implications for subsequent history. Although Montesquieu’s call for reform, was not revolutionary in tone, it helped to pave the road to the French revolution in its own way. In particular, his early work, The Persian Letters (1721) broke ground with a satirical treatment of French society under the Bourbon monarchs that stirred feelings of resentment among the populace. This was followed by his historical sketch of Roman polity, Causes of the Greatness and Decline of the Romans and his classic Spirit of the Laws in 1748. From his study of Rome, Montesquieu developed the idea of Republican virtue that was so popular with the founders. For example, the Agrarian ideal of Thomas Jefferson was a spirit of public interest that sprang from a life of frugality, independence and self-denial. This may appear to be similar to the Biblical ideal, but it comes from a Stoic starting point. Moreover, Montesquieu’s recommendations for a Republic were just as socialistic as Plato’s: “Establish common ownership of property as in the republic of Plato…let the state, instead of the citizens, establish commerce….” (3).

Montesquieu’s doctrine of the separation of power had a profound effect on the American Constitution builders, as noted above. In the words of James Madison, “…the three great departments of power should be separate and distinct. The oracle who is always consulted and cited on this subject is the celebrated Montesquieu…” (4). The founders also followed his denunciation of democracy in favor of the Republican form, but as the preceding paragraph indicates, they were very selective in their reading of Montesquieu.

Biblical analysis. In general, Montesquieu’s treatment of the division of power and the Republican form of government is biblical in nature. Political power in the hands of sinful man must be diluted, lest it prove to be too potent in the hands of a single individual or institution. However, he overstated his case when he laid down as principle that the judicial power must always be separated from the legislative and executive. Were that the case, Moses himself would be found guilty of unwarranted mixing of power. Moreover, he misjudged the power of the judiciary, making it “next to nothing” and failing to account for the abuse of judicial review. In this, the judiciary goes beyond simply judging the facts in light of the law, and becomes in itself a legislative tribunal. The Bible does not grant the judiciary, or any branch of government for that matter, the authority to sit in judgment on Divine law. This is a necessary implication of Montesquieu’s elevation of natural law above the law of God.

Corrective or Prescriptive Actions: Montesquieu’s glaring fault, in common with so many other political philosophers, is his failure to place the law of God preeminent in his system, making it subordinate to the undefinable law of nature. Churchmen must resolve to break this deadly pattern which has plagued Western Civilization almost from the beginning.