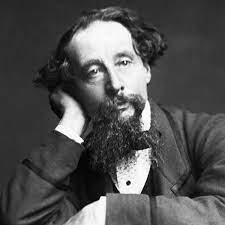 The *Industrial Revolution brought unprecedented *wealth to England in the first half of the 19th century. But molded by Jeremy Bentham’s Utilitarianism and Thomas Malchus’ theory of excess *population, the movement created a laboring class that subsisted in grinding *poverty. The novels of Charles Dicken’s comprise a one-man vendetta against these morally bankrupt theories. In Oliver Twist, Dickens censured the exploitation of *children in the factory and in the government foster care system. In A Tale of Two Cities he condemned the radicalism of the *French Revolution, contrasting it with individual sacrifice and love in the face of death. Best known of Dickens’ tales is A Christmas Carol, which depicts the melting away of *class barriers in the warm glow of the *Christmas spirit. Unfortunately, Scrooge is not converted to Christ, but rather to a kind of sentimental *moralism. Nonetheless, Dickens has left us with a vivid reminder to “remember the *poor” after the model of the Christian Golden Rule.

Who was Charles Dickens? (1812-1870) Charles Dickens was a prolific (remove italics) Romantic novelist, who chronicled life in pre-Victorian and Victorian England during the industrial age.

Historical context. Queen Victoria reigned from 1837 to 1901, longer than any English monarch. Dickens earliest works, Sketches by Boz and The Pickwick Papers describe life in pre-Victorian England before the Second Industrial Revolution. This was the world of the stage coach and country inn, set in a bucolic English countryside — a world that was soon to vanish. The stage gave way to the railroad in the 1840s. The first steam engines had appeared as early as 1689 and the following century brought automation to the manufacture of iron and textiles. Production began to shift from cottages to factories where output per worker was multiplied by the miracle of machines such as the flying shuttle and spinning jenny. This movement accelerated following the First World’s Fair at London’s Crystal Palace in 1851. The smokestacks of great manufacturing complexes sprang up, and workers congregated to create the great industrial cities.

The stage had been set for industrialization by the economic and administrative reforms of Jeremy Bentham in 1832. The result was a shift of power from the landed gentry to the entrepreneurial middle class, which stimulated unprecedented economic growth. Unfortunately, Benthamite economics was undergirded by a system of hedonistic utilitarianism, calling for policies that produce “the greatest pleasure for the greatest number”. Coupled with Thomas Malthus’ Essay on the Principle of Population (1798), this theory led to conditions of exploitation and misery for the working poor. It was an invitation to greed and abuse of the free enterprise system. Malthus believed that famine and war were necessary to eliminate excess population growth and even went so far as to declare that the unproductive orphan, “has no claim or right to the smallest portion of food, and in fact, has no business to be where he is” (1).

Charles Dickens became the novelist of the city, drawing inspiration from long, daily walks through the streets of London. He had, in fact, suffered as a child laborer after his father had been thrown into debtor’s prison. As an adult he took up the cause of the exploited child and factory worker in novels such as Oliver Twist, Nicholas Nickleby, Hard Times and the memorable A Christmas Carol., His writing career was consumed in a great crusade against the utilitarianism of Bentham and Malthus.

Summary of Dickens’ teaching. Dickens’ scathing criticism of an unprincipled capitalism has led many to conclude that he was an advocate of socialist revolution. However, there is not much evidence of this, especially given his criticism of the union bosses in Hard Times, his horror of the mob in Barnaby Rudge and his disdain for revolution in A Tale of Two Cities. Moreover, he is unyielding in his criticism of government bureaucracy in novels like Hard Times and Oliver Twist. In Oliver Twist he exposed the evil of the government “farm system” in which profit-seeking foster parents like Mrs. Mann were paid by the head to maintain the orphans like little piglets. In fact, Dickens has been criticized for devoting the whole of his energies in the expose of social problems, to the neglect of positive solutions.

On the contrary, the great thread uniting his work is a plea for the brotherhood of man, for employer and employed to work and rejoice together in a spirit of mutual sympathy and harmony of interest. Thus we have Cratchet and Scrooge celebrating together in the soft glow of the Christmas spirit. Although he was alleged to have contacts with Karl Marx during the latter’s writing career in London from 1849 on, he could hardly have sympathized with Marx’s determination to provoke class warfare. Social harmony between the classes is, of course, the theme of his most popular novel, A Christmas Carol.

Implications for subsequent history. Charles Dickens rivals Shakespeare and Chaucer in the annals of English literature. He was beloved as the great national storyteller during his own lifetime and his novels provoked reform of some of the worst social evils of his day, especially the exploitation of the laboring classes. However, some of his recommended reforms – e.g., public education and abolition of the death penalty — cannot be reconciled with Scripture. In The Christmas Carol and elsewhere he tended to equate poverty, crime and ignorance – a fatal conclusion that to this day remains a justification for government education. His analysis of slavery during his brief sojourn in America was based on limited or secondary sources and therefore misguided. His writing on this issue was thus a contributing factor to the American War Between the States. His analysis of the criminal mind had a profound influence on the great Russian novelist, Dostoevsky, whose work was more explicitly Christian. His legacy is captured in the adjective “Dickensian”, signifying a colorful variety in character and style developed in the context of grinding poverty.

Biblical analysis. The great tragedy is that Dickens sets before us a Christ less Christmas. Scrooge is not converted to the Savior, but rather to a form of sentimental moralism, albeit a moralism grounded in the Sermon on the Mount and the Golden Rule. “He saw Christmas as the time when he should return to the themes of selflessness…and the innate goodness of man. The lessons of the Sermon on the Mount rather than the celebration of Christ’s birth are what makes a “Christmas Story” for Dickens….”(2)

Dickens misinterpreted the doctrine of original sin to mean the visitation of the sins of the father on the son. In so doing, he apparently failed to grasp the idea of the depravity of man and his need for a Savior. It was said of him that he “was filled with a sense of emptiness and that one thing ‘missing’ in his life which he could never find. Throughout his life some buried sense of guilt prompted him to insist that he was the just man, the innocent man, and any reproach against him inspired a positive agony of fury and self-justification” (3). He dabbled in the occult and was an expert hypnotist. His novels portray an idealized woman for which he apparently yearned and did not find in his wife, whom he divorced after 20 years of marriage.

It was the year after his divorce in which he composed the classic Tale of Two Cities, an historical novel centered on the French Revolution. It was here that he came closest to capturing the heart of the Christian gospel in the story of Carton substituting himself for Darnay on the guillotine, in consideration of the woman whom they both love. With death only minutes away, Carton dwells on the words of Christ at the tomb of Lazarus, “I am the resurrection and the life: he that believeth in me, though he were dead, yet shall he live. And whosoever liveth and believeth in me shall never die.” (Jn. 11:25,26).

Corrective or Prescriptive Actions: Charles Dickens has left us an example “to remember the poor,” an admonition to which St. Paul responded, “the same which I also was forward to do” (Gal. 2:10).