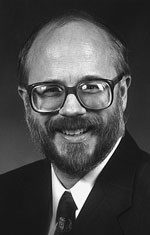 Rarely has a scientific theory deceived so many for so long. Darwin and Evolution have made a monkey out of man in more ways than one. Behe’s book, Darwin’s Black Box, describes recent advances in Bio- chemistry that disprove evolution. Modern tools of measurement show tiny cellular “machines” to be incredibly, irreducibly complex. It is im- possible for them to have evolved in Darwin’s step-by-step theory.

Who was Charles Darwin? Charles Darwin (1809-1882) was author of the wildly popular, Origin of Species (1859).  It is a supposed scientific attack on the Bible doctrine of creation.  Though he had a devoted wife, Darwin was apparently unable to win her to his theory. As the story goes, she went with him to the lecture hall one day.  He leaned over and whispered in her ear, “I am afraid this must be very wearisome for you.” To which she replied, “Not more than all the rest.”

Behe says that “Neo-Darwinism, which insists on (the slow accrual of mutations), is in a complete funk.  “This is because it cannot explain the irreducible complexity uncovered by modern biochemistry.  Structures like the eye or cilia defy evolution. “A valuable critique of an all-too-often unchallenged orthodoxy,” said James A. Shapiro in National Review after perusing Black Box (54).

Historical context.  Charles Darwin was the naturalist on one of the British survey ships (HMS Beagle).  These ships plied the oceans of the world in the early 19th Century.  Darwin  adopted the ancient Greek idea that all species evolved from a common lower life form through natural selection.  This, of course, was a direct assault on the Bible record.   Thomas Huxley was his pugnacious spokesman.  Those life forms best adapted to their environment survived.  The higher life forms thus emerged as a product of chance and chaos over eons. Where the first lower life form came from is really a matter of faith. The Darwinian world view has dominated science ever since.  It has crept into almost every other subject area as well.

Summary of Behe’s teaching contra Darwin. Behe’s thesis is simple.  Modern microbiology has found an array  of microscopic “machinery” in the body.  These machines  perform tasks of irreducible complexity that defy Darwin’s thesis. They include mechanisms like cilium, bacterial flagellum, the eye, and cellular transport.  From the standpoint of biochemistry, evolution is defunct.  These systems could not have arose in sequence. Yet as Behe points out its adherents cling to it with nearly fanatic zeal.  No articles in the professional microbiology journals deal with the basic issue.  That is how “molecular machinery” could have emerged step by step in an evolutionary pattern. Some biochemistry texts ignore evolution.  Others simply present it as a statement of fact (fideistic faith?) with very little backup.

Implications for subsequent history. Darwinism, of course, has become an article of faith for post-modern man.  It offers an excuse for banishing God from intellectual discourse.  Sadly, Darwin’s theory has not been confined to the scientific lecture-hall.  Social Darwinism is the idea that truth itself is ever evolving.  It  has moved on to corrupt nearly every discipline.  It has done special damage to economics, sociology, psychology and law.  Man – not God – thus becomes the judge.  The mind of man is made the standard of truth in every field.  The law of God is ignored even when it comes to civil government.  The civil leader is given the task of directing the forces of social evolution.

The science of statistics has likewise debunked evolution as a theory of origins.   That is true even when we grant  the long time periods assumed by evolutionists.  Behe, and other proponents of “intelligent design” have laid an  impassible roadblock in the path of the evolutionary juggernaut.  Whether its inertia can be overcome in the near future remains to be seen.

Biblical analysis. Genesis, of course, asserts that God created the various forms of plant and animal life in a short time “after their kinds.” This excludes any  evolution between species, but changes within species might still occur.  Romans 1 says the evidence for creation is innate and overwhelming.  But the natural man holds it at bay. Darwin is also struck down by the Bible’s teaching that creation took six, 24-hour days.  Phrases like “the evening and the morning were the first day”  make this very clear.

Darwinism quite simply is a belief system that defies logic.  It is a faith in man and nature that handily gets rid of God and His moral demands.  Thus, it has an abiding appeal to the pseudo-scientist and the uninformed “natural man.”  It confirms both in their rebellion from the Creator. Michael Behe uses microbiology to show how Darwin’s evolution is simply not possible.  Sadly, he assures his readers that this does not have to imply creation by the God of the Bible.  Faulty thinking about quantum mechanics could make man himself — or simply the process of observation — the Creator. Sadly, creation scientists have also taken a neutral approach.  They hope in vain to get equal time for creation in the government schools.

Corrective or Prescriptive Actions: In the context of the Bible world view, followers of Christ are told to “answer a fool according to his folly, lest he be wise in his own eyes” (Prov. 26:5).  Darwin’s Black Box provides plenty of ammunition for such a response in the many examples of “irreducible complexity” God has built into His creation, but it falls short of giving glory to the true God.