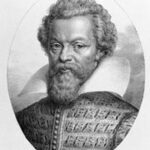 The conflict between Catholics and Protestants (Huguenots) in France was often bloody. The proposed marriage of the Huguenot Duke of Navarre and the king’s Catholic sister ended in the St. Bartholomew’s Day Massacre of Protestants. Brutus wrote Vindiciae Contra Tyrannos later to justify Protestant resistance to moderate Catholics. Because of his audience he relied heavily on natural law reasoning.

Who was Brutus? (1549-1623) “Brutus” was the pen name of Huguenot theologian Du Plessis-Mornay.  He was the likely author of Vindiciae Contra Tyrannos (1579) some time after the St. Bartholomew’s Day massacre.  He was known as the “Huguenot Pope.”  This was because he was so effective as a leader in the Huguenot military and diplomatic cause.

Historical context. The French Calvinists, or Huguenots, were pitted against the Catholic faction — the House of Guise.  This was a bloody and extended war. Wavering between the two was the royal family.  It was headed by King Charles IX, a weak ruler, who went back and forth.  He was torn between the entreaties of the Huguenot general, Coligny and the despotic queen mother, Catherine De Medici. Catholicism won out in France, thanks largely to the sell out at the St. Bartholomew Day Massacre in 1572. Most of the Huguenot nobility were slain in their beds.  They had assembled in Paris as the King’s guests.  The event was the wedding of the Duke of Navarre, a Huguenot, and the King’s Catholic sister (Margaret of Valois).

Catherine De Medici was a daughter of the powerful Florentine banking family during the Renaissance.  They controlled banking, politics and the church for about three centuries.  The family patronized the arts, including masters such as Raphael and Michelangelo.  Two of their members sat on the Papal throne (Leo X and Clement VII).  Their political foes twice exiled them from the city. Leo X transformed the Papacy into the most feared political force in Italy. His lavish court, support of the arts, and remodel of St. Peter’s Basilica soaked up money like a sponge.  It led to the sale of Papal indulgences and thus to the Protestant Reformation. It was Leo’s Papal Bull of excommunication that Luther burned.

Summary of Brutus’ teaching. Brutus’ task was to justify Huguenot resistance in the eyes of moderate Catholics.  Thus, he had to rely on natural law sources besides the Bible and Calvinist doctrine. Douglas Kelly noted that, “Teaching on the derived sovereignty of the people [above that of the king], and their inherent right to resistance, would pass (indirectly and combined with ideas of very different parentage) into late 17th century English political theories of human rights.” (17). These were theories that stressed the natural freedom of man in a supposed state of nature.  Spiritual and political liberty flowing from the work of Christ and His law were down played.

Implications for subsequent history. For instance, Brutus did not take the biblical approach of Samuel Rutherford in Lex Rex.   Rutherford had urged the state to lead the way in the destruction of idolatry, i.e., Catholic icons.

the other British Commonwealth men.  These had a temporal influence on the American founders.

Biblical analysis. It is easy to criticize from the vantage point of hindsight.  But the French Christians may show by way of negative example the dangers of shifting our belief under persecution. The pressures on the Huguenots were intense over a long time period. Who can tell what any in the pampered modern church might have yielded to? The Waldensians and Huguenots certainly give us a sterling example of Christian heroism in very trying times. The Waldensians came first, preaching as traveling peddlers in the Alpine region. They were organized by Peter Waldo, a wealthy merchant of Lyons.  The Inquisition, run by the Dominican Friars treated them savagely.

Even so, the St. Bartholomew’s Day Massacre may have occurred in the sovereignty of God as a judgment for the proposed mixed marriage.  During the Catholic wars the peace loving Huguenots often gave up by treaty what was  gained by valor. Were the Huguenots now relying on an unholy pact for succor rather than God? The young Duke of Navarre (Henry IV) debated these issues in his own conscience. But he was persuaded by his superiors, including his mother, who was a strong believer.  However, heathen marriages lay at the heart of Nehemiah’s reform after the restoration. The Jews were exhorted strongly by Nehemiah.  “Did not Solomon king of Israel sin by these things?” he demanded to know, “Yet among many nations was there no king like him, who was beloved of his God; nevertheless even him did outlandish women cause to sin” (Neh. 13:26).  Henry IV remained an enigma.  He converted between Protestant and Catholic several times. In 1598 he issued the Edict of Nantes, which Brutus had helped craft.  It granted the Huguenots relief for nearly a century until revoked by Louis XIV in 1685.

Corrective or prescriptive actions.  Resist the temptation to give misplaced mercy to evil.  Israel was plagued for years because she failed to wipe out the Canaanites.  After a bitter battle there is something in the Christian spirit that tends to give up too much in the desire to be lenient with a defeated enemy.

We must guard against this fatal habit.  It was the downfall of Julius Caesar and Lady Jane Grey, among others. A conquered enemy may be granted freedom under the law of God.  But he must not be given ruling authority apart from submission to the covenant of Christ.