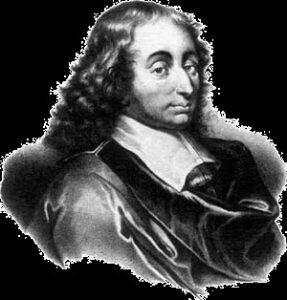 Blaise Pascal was one of the few who did not make science a stand- alone source of truth apart from the Bible. He was a math prodigy who made many practical discoveries before age 30. After his mid-life conversion to Christ, he became an active apologist, though he tended toward mysticism. In his famous wager, he challenged skeptics to accept Christ, betting against the awful consequences if it were true.

Who was Blaise Pascal? (1623-1662) Blaise Pascal (1623-1662) was a French scientist, philosopher and Christian apologist. He helped advance the frontiers of science in a number of fields.  These included equilibrium of fluids, vacuums, probability and the differential calculus.  When it came to math Pascal was a child prodigy.  At only nine years old he asked his father to tell him about geometry. His father replied simply that it was the study of shape and form.  The boy began to study entirely on his own.  In a short time he came up with Euclid’s first 32 theorems all in the correct order.  His father was of course amazed.  From that point the course of his life was set.  Pascal went on to invent the barometer to measure air pressure, the altimeter to measure altitude, the hydraulic press and other practical devices.  Pensees was published posthumously in 1670.   It contained his religious meditations from scattered notes found at his death.  Pensees is French for Thoughts. “What a chimera then is man!,” said Pascal, “What a novelty! What a monster, what a chaos, what a contradiction, what a prodigy! Judge of all things, feeble earthworm, depository of truth, a sink of uncertainty and error, the glory and the shame of the universe.” (30).

Historical context. “Holiness implies saints,” notes historian James Turner, “and the cult of science bred them in job lots. There were the Desert Fathers, Roger Bacon and Copernicus, toiling alone in the barrens of medieval superstition; the founders of scientific monasticism, Francis Bacon and John Locke, laying down the rules of investigation and knowledge; the great Evangelists, Newton and Darwin, transcribing the gospel of nature; and above all the roll of the martyrs scattered by the church, Giordano Bruno at the stake, Galileo before the Inquisition, Joseph Priestly hounded from England.  Here were paragons of holiness a free mind could venerate, a communion of saints unbelievers could aspire to enter” (31).

It is the belief that the scientific method alone is the source of truth and provision for man. The waning Christian influence was due in part to the Reformer’s resistance to the new science. Luther, for example, rejected Copernicus’ conclusions.  He apparently failed to recognize the anthropomorphic nature of certain Bible statements about the earth.

Summary of Blaise Pascal’s teaching. However, some early scientists resisted the trend to “Scientism.”  Among them was Blaise Pascal who lived at the same time as Rene Descartes.  Descartes was the first to assert the autonomy or independence of the mind of man. By contrast, Pascal never lost contact with the touchstone of God’s Revelation.  He knew that the Bible was the source of truth and the only context for true scientific research.

Most of his science was complete before age thirty.  Then Pascal turned to philosophic and apologetic pursuits.  The shift coincides with his conversion the night of 23 November, 1654.  He summarized this in the Pensees (Thoughts).  These were random notes discovered at his death. “The heart has its reasons that reason itself does not know.”  This is Pascal’s well-known summary of his mystic faith.  Strangely coupled with his fideism (blind faith) was his use of probability as an apologetic method.  He called upon men to choose Christianity as the path offering the greatest probability of eternal hope.

Later in life Pascal joined the Jansenist reform movement in the Roman Church.  This group stressed Calvinistic doctrines like the depravity of man and predestination.  Pascal was thus an unusual mixture of predestinarian and mystic, rationalist and fideist, scientist and religious believer. “In the heart of every man,” he said, “there is a God-shaped vacuum which only God can fill through His Son, Jesus Christ.”  Lacking theological precision, mysticism claims to gain unity with God and intense spiritual emotion.  Its means are meditation, piety and Platonic retreat from the world.

Implications for subsequent history. Pascal epitomizes a balanced view of science and faith.  He shows  that the two do in fact mix.  Thus, science must be pursued in the context of Bible truth or it soon departs from reality.  Twentieth Century Quantum Mechanics is a good example.  Quantum Mechanics has proposed such oddities as the theory of parallel universes.  Another is the theory that the act of observation creates reality.  Pascal forged a strong link between science and the Bible.  But, his forays into mysticism added to the illusion that philosophy may operate apart from theology.

Biblical analysis. Contrary to Pascal the Bible commands man to love Him with the mind as well as the heart.  According to St. Matthew, “Thou shalt love the Lord thy God with all thy heart, and with all thy soul, and with all thy mind” (Matt. 22:37).  We should not downplay the logical capacity of the Spirit-enlightened mind to grasp  doctrine.  Denying this has resulted in all kinds of heterodoxy (bad belief) and heteropraxy (bad practice). On the other hand, we must not try  to prove the truth of the Bible message, as per Pascal’s use of probability. On

the contrary, the proof of Christianity lies in the transcendental argument set forth by Cornelius Van Til.  That is, apart from God’s revelation it is impossible to understand anything at all.

Corrective or prescriptive actions. Asking men to choose Christianity because of the greater probability of its being true is to set men up as judges of  the Bible.  It is man, not God who is on trial.  Imitate Pascal’s biblical attitude toward science.  But, study his apologetics and his mystical approach to God with great caution.