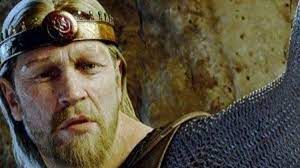 Beowulf, is one of our few sources for understanding the waning influence of the pagan *warrior ethic in the emerging Christian *culture of Anglo-Saxon Britain and Scandinavia.  Its probable date of composition was between 750 and 850 in an *aristocratic setting such as the court of Offa or *Alfred the Great.  The Anglo-Saxons who conquered Britain after the Roman evacuation in *410 were in turn conquered for Christ by missionaries sent from Rome beginning in 579.  However, the old ways did not die overnight, as recorded by Beowulf.  For example, the theme of attaining glory through *vengeance in battle pervades the action.  But according to J.R.R. *Tolkien, the poem is to be read as an *allegory of Christian themes such as the defeat of evil personified by Grendel, a descendant of *Cain, by a man of godlike strength.  In addition, there are many references to the *sovereignty of God throughout the poem and in the end Beowulf dies in conflict with a *dragon after being deserted by his 12 followers.

Who was Beowulf? Beowulf is one of the oldest and the greatest poems in English history prior to the Canterbury tales. The author and specific date are unknown, but the poem contains a treasure of information on early Anglo-Saxon and Scandinavian culture. The lone copy of the poem was unknown until rediscovered in 1705 and barely survived a fire in 1731. It was most likely composed sometime between 750 and 850 A.D. There is an allusion to the legendary Hengest, leader of the Saxon invasion, between 515 and 530, which is one of the poems few chronological reference points. In addition, references to “Spear-Danes” in lines 1-3 seem to date the poem in the 830 to 940 range. The “aristocratic” style and content of the poet could have fit comfortably in one of the court schools of the era, such as that of Offa (757-796) or Alfred the Great (849-899).

Historical context. The era of the middle ages was a period of sturdy and rough-hewn Christianity, carved out of the rock of the surrounding paganism. Charlemagne, the great king of the Franks, was almost constantly engaged in war on his frontiers; he battled the Saxons of Germany for some 30 years in the early 800s and imposed mass conversion to Christianity as a condition of peace. The German converts generally adopted an Arian form of Christianity.

Roman retreat from Britain in about 410 had left the door open for the Saxon invasion and establishment of eight subkingdoms (Wessex, Sussex, etc), which were united under King Offa at the time of Charlemagne. The native Celts were driven east into Wales and Scotland. The tales of king Arthur’s resistance to the Teutonic invaders dates from this period. The original Anglo-Saxon leaders were thought to have descended directly from the Scandinavian god, Woden, thus they inspired great loyalty in their war-bands, known as the comitatus. Such a band and its Hall (clubhouse) is featured in Beowulf.

Missionaries sent from Rome by Pope Gregory the Great converted the Anglo-Saxon chieftains beginning in 579. The greatest of these, Alfred the Great, quelled the Viking invasion of the late 800s and forced the great Viking general Guthrum and his army to accept Christianity. Many Anglo-Saxon missionaries returned to their ancestral homeland in Germany, the greatest of whom was Boniface. In about 722 Boniface was commissioned to Germany where he cut down a huge oak believed to be sacred to Thor and turned it into a chapel. As the result of his pioneering labors the gospel had made great progress in Germany and Scandinavia by the year 1000.

Summary of Beowulf’s teaching. This was the culture from which Beowulf emerged; the original extant copy dated about 1000. There would seem to be almost as many interpretations of Beowulf as there are interpreters. Part of the difficulty stems from the incongruous mix of pagan and Christian elements in the poem. Adding to the ambiguity is the challenge of identifying a theme that will unite the two major divisions of the book into a coherent whole. Moreover, a seemingly endless string of discursions defies the reader’s ability to tie everything back into the main storyline.

In its main outline the story describes Beowulf’s battles with three great monsters. In the beginning Beowulf, a native Geat from Southern Sweden, sails to Sweden to do battle with Grendel, a troll-like creature descended from Cain, who for 12 years has been terrorizing the great Hall of Hrothgar, king of Denmark. Beowulf seizes Grendel in a vise-like grip during his final nocturnal raid, ripping off his arm and shoulder as he flees in terror. The Dane’s celebrate, but the next night Grendel’s mother appears in the Hall and carries off a great Thane in revenge for her son’s death. Beowulf fights and kills the dam in her lair at the bottom of an enchanted mere or deep pond. Returning home, Beowulf rules the Geats for 50 years in peace and justice before doing battle with a dragon that has been terrorizing his people. Both Beowulf and the dragon are mortally wounded during the ferocious battle. The dragon’s hoard is given to his countrymen, who return it to him in his barrow, or burial mound.

Biblical analysis. Following the 1936 literary analysis of Beowulf by J.R.R. Tolkien, many Christian interpreters have held that the key to unlocking the poem is reading it as an allegory of biblical themes. Supporting this view is the clearly stated fact that Grendel is a descendent of Cain and therefore a personification of evil who is slain by Beowulf, the man who is more than a man. Beowulf voluntarily assumes this burden on behalf of his friend, Hrothgar. Afterward Beowulf rules his people with compassion and humility for 50 years, although he is desirous of earthly glory. The closing words of the poem reveal that Beowulf “was the most generous and loyal to his men, the most protective of his people, the most eager for fame.”

Douglas Wilson lists many old English words and phrases that are indicative of the maturity of Beowulf’s faith in God (1). For example, Hrothgar declares of Beowulf that, “Holy God in his grace has sent him to us” (381b-82). The sovereignty of God is acknowledged at many points, such as lines 3053-3057: “No man could enter the tower, open hidden doors, unless the Lord of Victories, He who watches over men, Almighty God Himself, was moved to let him enter, and him alone.” At the end of his beneficent reign, Beowulf offers up his life for his people while killing the dragon that has been ravaging the land. The 12 thanes who accompany him to the battle flee at the first hint of danger, like the disciples of Christ. In his death he provides great riches to his people, who eventually return them to him.

Tolkien’s analysis, a strong case for a unified theme and a single, Christian poet, became the standard for many years. Tolkien also emphasized that the poem is set in the pagan, warrior society from which Anglo-German Europeans were in process of emerging.

Implications for subsequent history. More recent scholarship has focused on the surface of the poem.  The poem reflects the heroic ideal, seemingly at odds with Christianity, which makes it of unusual value for studying the interplay of Christianity and paganism in the early middle ages. The actors speak like Christians, but in many cases seem to act like pagans. The heroic warrior code, which may be traced as far back as Homer’s Iliad, makes heroic pride and attainment of glory in battle the ultimate standard for this life and the next. “Let him who can achieve glory before death,” declared Beowulf, “That is best afterwards for the dead warrior” (lines 1386-89). Before pursuing Grendel’s mother, he comforts Hrothgar with the words, “Do not grieve, wise man! It is better for every man that he avenge his friend than that he mourn much” (1384-1385). This ethic was so deeply engrained that the church could do little but wink an eye at the blood feud for centuries. Beowulf’s cremation was part of the pagan warrior code. More than any other piece of literature, Beowulf has shaped our understanding of Anglo-Saxon England.

The conversion from paganism to Christianity was apparently a gradual process, not a discontinuous leap into mature Christianity. “What really happened was rather different,” according to Ogilvy & Baker, “Anglo-Saxons added Christianity to the heroic code. Beowulf is a product of this blending of old and new” (2). William Manchester in his popular history of the Middle Ages, A World Lit Only By Fire, takes a rather more cynical view of this hybrid than is warranted by Beowulf. “Thus the allegiance of converts was divided ”, said Manchester, “ Few saw any inconsistency or double-dealing in it. Hedging bets seemed only sensible. After all, it was just possible that Rome had fallen because the pagan deities had turned away from the city whose emperors no longer recognized them” (3).

Corrective or Prescriptive Actions. The dilution of Christianity with pagan deities continues to the present day in sometimes more subtle forms. For example, we find the majority of Christians in 20th Century America offering their children for training in atheistic humanism at state financed schools. Future historians of the Christian church will no doubt marvel at this accommodation to paganism in the same way we wonder at the amalgamation of belief presented by Beowulf.