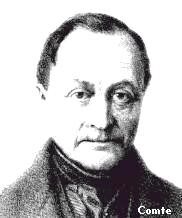 Auguste Comte is the father of modern sociology. He suggested that each discipline progresses in three stages. First, is the fictitious, relig- ious stage. Second, is the abstract, metaphysical stage. Third and most advanced is the positive, scientific stage. Sociology was at last emerging to banish Christianity forever. Comte invented a new religion of humanity, which located the source of evil in the environment.

Who was Auguste Comte? Auguste Comte (1798-1857) was a French philosopher and the father of modern sociology.  His entire six-volume Positive Philosophy of Auguste Comte (1842) was devoted to the subject.  Comte had an agile mind and amazing memory.  For instance,  he could recite all the words on a page backwards after reading it just once.  However, his complex philosophy scoffed at Christianity.  He described “religious man” as the most primitive stage of social growth.  By contrast, “scientific man” was the most advanced. “Nothing at bottom is real except humanity,” he proudly asserted in his System de Politique Positive.  He went so far as to propose a new “Religion of Humanity.”  Its worship services centered on great men of the past.  But it didn’t get very far, especially in America.  “The dead govern the living,” was one of his prime doctrines (Catechisme Positiviste, 1852). His religion mutated into “scientism”, a system in which science is regarded as the source of true knowledge.  Comte was a supreme egoist. When told that his death was imminent, he lamented, “What an irreparable loss!”

Historical context. Comte’s three historical stages were modeled after Hegel.  Hegel came up with his dialectic process of evolving reality — thesis, synthesis, antithesis – in the early 1800s.  In this same vein, Darwin’s Origin of Species appeared in 1859.  Darwin offered supposed scientific proof that man evolved from lower life forms by natural selection.  It was not long before evolution theory spread to areas outside science.  These included economics and sociology.  In fact, evolution gave a strong boost to Comte’s fledgling discipline of sociology.  Comte’s generation also witnessed a pendulum swing into Romanticism.  Men turned away from the sterile rationalism of the 18th Century.  They perceived the God of Newton to be an absentee clock maker (Deism).  On the other hand, the Romantics’ god was immanently near or indwelling, and pantheistic.

Summary of Comte’s teaching.  Comte’s religion of humanity never gained a foothold in North America.  It finally died out in Europe.  He carried the cult of Scientism to its logical extreme.  Comte posited three stages of evolutionary growth in each field.  His first stage was the theological (fictitious).  Second was the metaphysical (abstract).  And third was the scientific (positive thought).  Certain subjects were quicker to advance to maturity due to their simplicity and independence.  These included astronomy and physics.  Social theory, due to its complexity and dependence, was the last to arrive.  But it was now entering its golden age.  Comte went so far as to try and set up a new religion of humanity.  He adopted Catholic-style ritual, priesthood, and adored a pantheon of “Great Men.”  The “Great Being”, defined as humanity past, present and future, was also worshipped.

Comte’s new science of sociology has risen in its place.  Sociology attacks the sources of evil outside of man in society.  This is the essence of the social gospel, in which salvation lies in social action. Sociology is the study of group behavior.  By contrast, psychology is the study of individual behavior.  Democratic political institutions also evolve into rule by a scientific elite.  This is a throwback to Newton’s Royal Academy and Francis Bacon’s New Atlantis.  Comte “prophesied” a union of the best features of the 5 leading nations of Europe.  This pointed ahead to the European Common Market.

With Comte the human race “matures” from the theological phase to the scientific.  In the process it leaves behind useless questions about ultimate meaning for the practical concerns of the scientist. This results in a view of science as pragmatic technology.  There is no room  for the ultimate meaning of its activity.

Biblical analysis. Jesus put His finger on the true source of the evil that exists in society.  “But those things which proceed out of the mouth come forth from the heart;” He said, “and they defile the man. For out of the heart proceed evil thoughts, murders, adulteries, fornications, thefts, false witness, blasphemies…” (Matt. 15:19).  It is sin within the heart of man that creates problems in society.  It is not impersonal social and economic forces.  Because of this mankind apart from the grace of God tends to devolve toward corruption.  He does not then evolve toward perfection, contrary to Comte. Avoid “profane and vain babblings,” warns the Apostle Paul, “and oppositions of science falsely so called” (I Tim. 6:20).

Corrective or Prescriptive Actions: No amount of “social engineering” by political humanism is sufficient to save man, as an individual or as a culture. Only a return to the “primitive” gospel of Christ can achieve this outcome.